Alternate versions of songs not showing up in Tracks page

Currently, alternate versions are being treated the same as hidden tracks on the Tracks page. I don’t think this makes much sense.

For instance: There might be a remix (or acoustic version etc.) of a song marked as an alternate version. The alternate version won’t show up in the Albums page, which makes perfect sense to me cause it is just another version of the same song. Doing the same on the Tracks page seems off though, since I image you want to see all the tracks that you liked (or even just added to your library).

I only would like to hide tracks that are more of a duplicate than another version of the song. Currently, I have added CD versions of albums as hidden albums if the MQA version is also available. I then might unhide those CD albums and use the filter to listen to lossless only tracks using my favourite HQPlayer filter (mostly because I find MQA to be limited with the options of filters I enjoy using with that format).

Hope you understand and agree with the use cases I mentioned and proposed and update the process. If not, I’d love to hear Roon’s point of view on this specific matter. Thank you in advance for all your support.

Can you elaborate on a specific example here, with screenshots? Is this alternate track from an alternate version of the primary album?

Thanks for the quick reply.

An example that Roon sees as alternate versions by default are Alicia Key’s Show Me Love singles. There’s the original version, with just Alicia Keys and Miguel. And then there’s a remix with 21 Savage included. 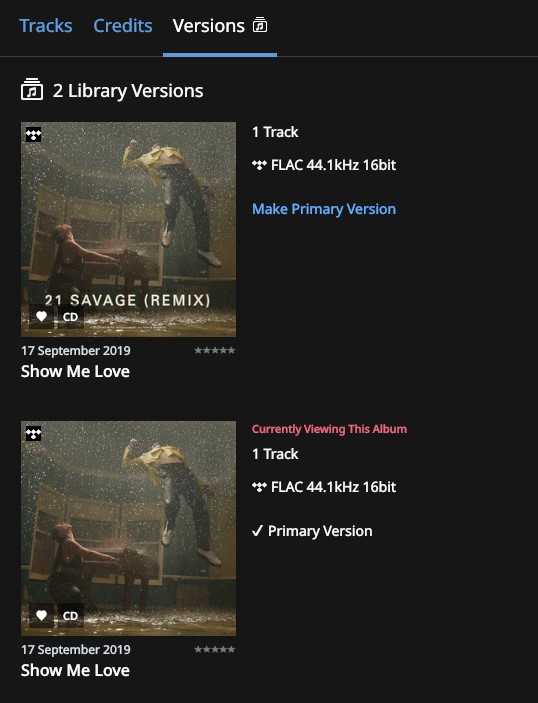 In the Tracks page, only the Primary Version will be shown (unless you tick the “Show hidden tracks and albums” option in Settings).

If I ungroup these two Singles with Roon, both versions will show up in the Tracks page, but then they would also be shown in the Albums page. Alternate versions are being treated the same way as hidden tracks on the Tracks page (which I believe are two different concepts).

If you would group any two albums/singles together to make an alternate version, then all but the Primary Version will be hidden from the Tracks page. So, it’s not an issue specific to an album, but a workflow issue.

Hope this clears things up. Thanks again.

Thanks for the details, @Arash!

I’ll be sure to pass this along to the team. I would recommend also posting your suggestion in the 'feature request" section of the site.

The feedback is much appreciated!

Thanks @dylan, I really appreciate the support.

I’ve created the topic in the Feature Request section as suggested:

Dear Roon, As suggested, I’m posting this topic, which has already been discussed in the Support section, in the Feature Request section. You can find the topic here: https://community.roonlabs.com/t/alternate-versions-of-songs-not-showing-up-in-tracks-page/93049?u=arash In summary, if an album in your library is marked as an alternate version of the album, it will be hidden on the Tracks page. This means that within the Tracks page, alternate versions of songs are being treated the same as h…

I’ll try to keep the Feature Request section in mind in the future. Thanks for pointing that out.