Description Of Issue
Get these errors for the first time:

An audio file is loading slowly. This may indicate a performance or hardware problem.

Just added a DSD 64 album of music to my library along with other non-DSD music. So far, I’ve only experienced these errors on the DSD 64 album.

First time it happened on maybe the second song, today it got to song 12 before the error occurred and then again 2 songs later. I have a DSD 256 album and never had this happen.

Is there a log file on my iMac where I can see all of these errors? 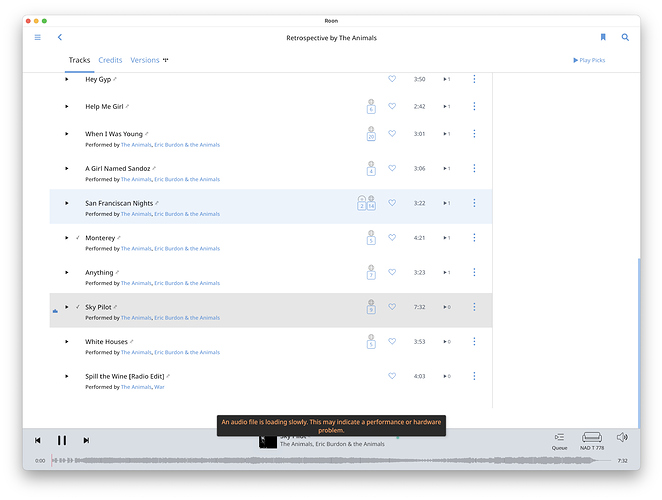 I asked about the error log file because it would be nice to just play the album using Play Now and go do something else instead of listening and watching for the error. 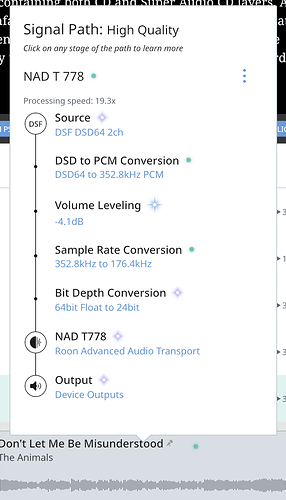 Thanks for that screenshot! That looks as expected regarding processing speed.

Is there a log file on my iMac where I can see all of these errors?

Yes, you can access logs by using these instructions. Can you please note the track you had an error with next time and send us a log set for review? Thanks and Happy New Year!

Hi, Happy New Year! Long story short, my HDD in the USB Dock was going bad. I guess reading DSD files is more stressful than FLAC? Put in a new HDD, restored my music files from a backup and no issues so far. Thanks for the support!

Thanks for letting us know you were able to sort the issue out and replaced the HDD!