For those who are interested, the Elac Discovery E3 Roon End Point speaker is again on sale. Since they are recurrently deeply discounted on the Elac site, it may portend of a future improved design. In the interim, these are nice speakers in non-critical areas.

Thanks for the heads up. I have one in the kitchen zone that works very well with Roon. Noticed they were 399 a while back and I also thought a newer model might be coming. Held off and the price went back up higher than before. I’ll buy another one at 299 even if a newer one is coming out.

You are most welcome. They are for non-critical listening, and for us, I do not think a new-improved model would add to our listening enjoyment. I cannot play the Z3 (wifi) within earshot of the main system (ethernet) due to reception time difference. I paid $299 for the first, but it took many weeks to receive.

In either case, I truly have no need for a second one despite my wife insisting that it was just “too good to pass by” so…I bought the second one today.

Setting them up if they do not have the latest firmware is problematic until I found that I could access the firmware using the IP address of the speaker and update it.

Mine was 499 originally. I do recall an issue with the original setup then I found that the firmware can be updated through Roon from the Settings Audio page. Under Roon ready - device info - configure device. Since then it has been easy to check for updates and install them. I ran Ethernet to the kitchen and the grouped sync is spot on with the LR and BR zones. I’ll probably use new one for the shop. That will be much better than my phone as a zone with an outdoor party speaker.

Thank you. This is what I see. 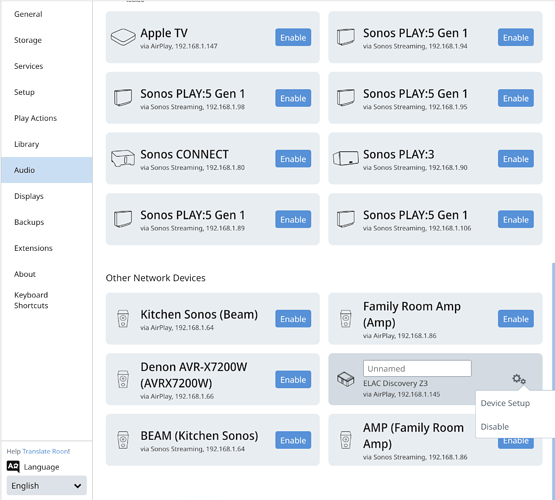 Where is your Roon Ready section? 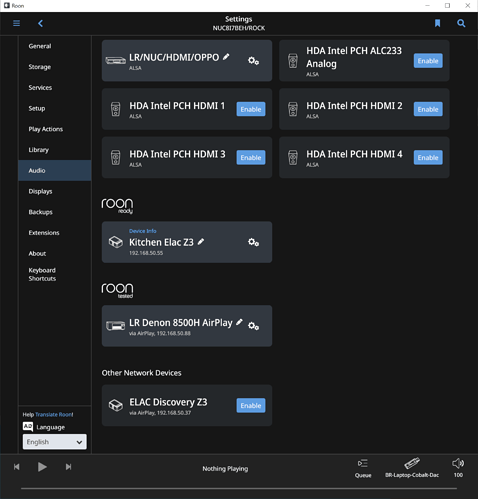 Then select Device Info to get the Configure Device. 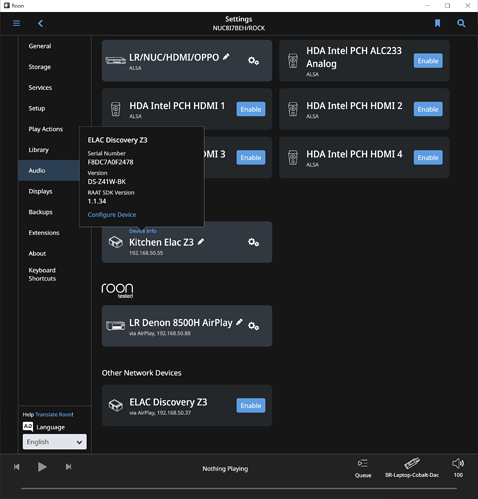 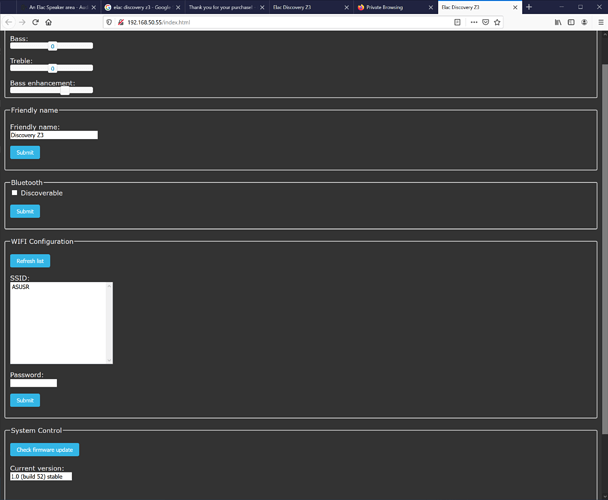 Got it and thank you.

Well, that worked out well and thanks again for the heads up on the price reduction.

After I had already ordered one, my mom asked be what I wanted for Christmas. I told her the deal on the Z3 and she said that was good and could I order it for her - for me. Sure, its on the way. So mine was a Christmas present.

It has replaced my pc/dac in the Master Bedroom zone. Nice change.

First, you’re most welcome, and enjoy.

We ordered a Elac Discovery E3 (our second) for $299 when they went back on sale again.

Two days later, we ordered a second one (our third), and then the problem began.

Nothing was confirmed, nothing was shipped, and inquiries resulted in no response. The impression was that they had well-meaning kids handling customer support etc.

Finally, one just arrived, but not the second.

We inquired when it would come, and finally we were told it had been canceled due to being out of stock.

They said they had refunded the $299. They had not.

Calls, email, phone chain, heavy drugs got no clarification. They then sent a tracking notice that the unit had been received by us…they had order numbers confused and were using the incorrect order number with an incorrect tracking. And they continued to have our $299.

It bordered on borderline funny.

We finally reached a nice young guy who chased it down and found that the "girl handling the order had made one or more mistakes and"he then refunded the money.

So we have wound up with two of the three wanted.

We run the Discover E3 as Roon end points (after the two firmware updates) via WiFi and just the NUC as a source. It is fine for lo-fi, and cost so little, but I would have difficulty fathoming using them for any form of sitting/listening. To us, they sound less well than a small SONOS.

I also ordered a SONOS Move (also on sale) which we do like. The Move is quite heavy (battery).

After the one I ordered was given to me for Christmas I went back to order another one and they were already sold out. Wasn’t interested in another one at the higher prices elsewhere. Hopefully Elac will have an improved one box solution coming that’s Rood Ready as delivered.

Sorry to hear of the issues with your order. Hate stuff like that. Luckily mine arrived in 14 days.

I totally agree with your assessment, not the best Roon Stereo endpoint for relaxing and enjoying good music. That would be my LR system but even there my enjoyment is limited without the addition of a quality Streaming DAC to get the most out of Roon. Begging will probably be involved for my wife to agree to that expensive addition.

The Z3 is a decent “mobile” solution for a quick easy way to get Roon playing in other rooms, and actually pretty good for whole house music. With Ethernet the timing seems to be spot on moving from one end of the house to the other.

I have a 100’ cat6 cable that will reach from the house to my shop. Have many days of cleanup work to do out there, starting this weekend, and want to see if the Z3 will make that a little more enjoyable. Better than WiFi with my phone as an endpoint and a party speaker.

You and I did about the same thing. I ordered one, two days later I ordered another (which would have been my 2nd and 3rd). They finally shipped one, and the rest is “just history.” Burdensome.

The two Z3’s are running via WiFi, but the main system is on ethernet. Thus, I get a delay to the two Z3 if I run all concurrently…so I do not.

At the MSRP they are not something I would pursue, and they keep repeating the sale apparently to get rid of inventory. Interesting that there have been two firmware updates that the end user must perform (not a big deal but I can see how some may be confused that you cannot easily do that with the app and must use the IP approach).

I do not know if it is possible for us (in this household) to get the preferred sound (vinyl) from digital files.