There were 5 merged albums in the set (my doing) previously but when I broke them up it was obvious two should go back together.

Oddly one is classed as a duplicate when the tracks are obviously different aklthough the headers and covers are the same: 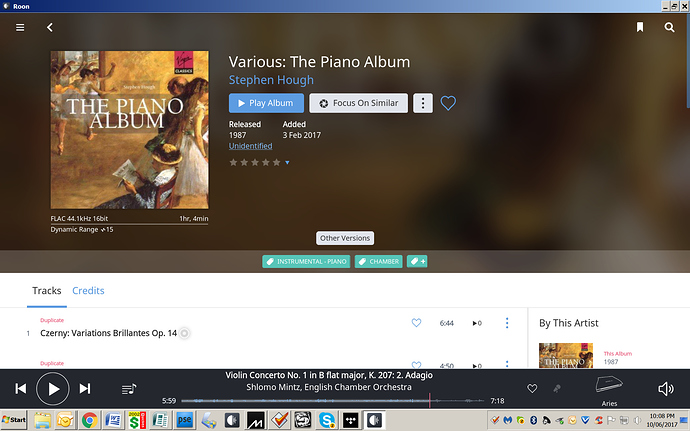 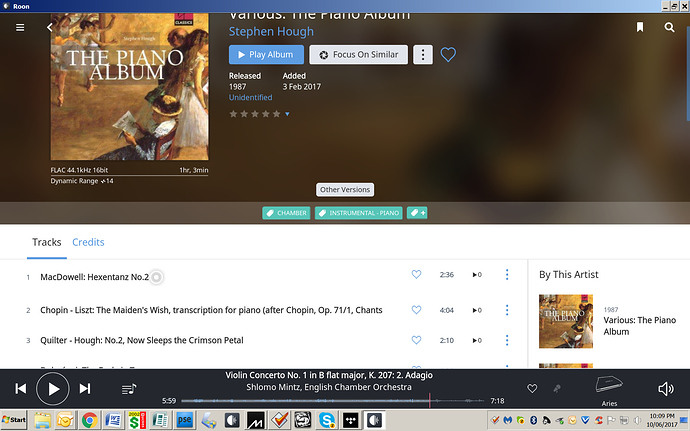 But when I try to merge them back together again it is impossible to get a two disc setup: 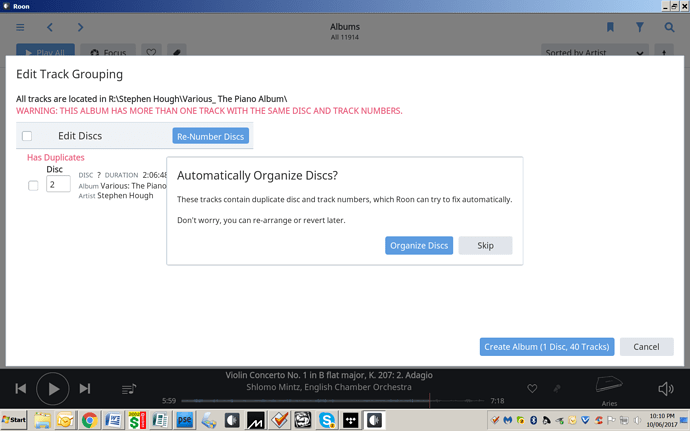 I have overcome this in the past by renumbering the tracks to give a single album with no duplicated track numbers but this should not be necessary. Not as crucial issie but one which should not occur. It seems Roon corrupts albums when they were previously merged and then broken up. It wouild be appreciated if this could be fixed.

It seems Roon corrupts albums when they were previously merged and then broken up.

Thanks for the response although I’m unclear what the user error was and would appreciate knowing what caused it so it can be avoided in the future.

Roon actually did come up with a match under identification but did not recognise it as a match! Here is the picture after the merge (and it was similar before the merge): 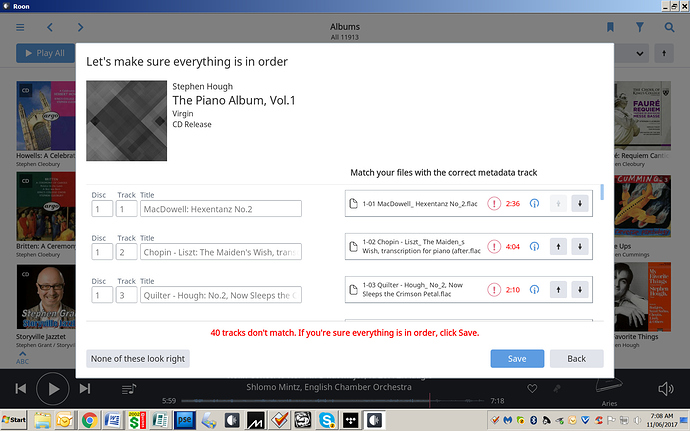 However accepting it as correct eliminated the incorrect duplication tags and did allow the merging of the two albums.

So, immediate problem solved but I cannot find out on the knowledge base or by a search how to rescan which I presume is what you mean by clean the database.

And, as someone posted before, that knowledge base is not obvious to find and should be clearly and boldly listed. Adding instructions on recanning etc would be helpful.

The idea here by removing troublesome album files … then cleaning the lib … Roon forgets all about them so they can be re-ingested completely from scratch. Which can help when file names and tags have to be corrected.

[quote=“JOHN_COULSON, post:3, topic:26912”]
[Roon] knowledge base is not obvious to find and should be clearly and boldly listed.
[/quote]Agreed, there should be an icon/link on the top of every support page.

Thanks Carl - helpful as usual.

I had only been using the “Clean up the Library” previously to completely get rid of items I had deleted but I notice that is not becessary after this last update.

I finally realised where the recan option was but have never seen it achieve anything so wonder if there is ever any purpose in doing it.

Finding one’s way around Roon is often very challenging and the search engine is not always helpful. The Roon knoweledge base is good up to a point but needs expanding to cater for those of us less proficient /ignorant about the finer points of handling data in Roon.

In passing, I thought I had lost albums yesterday when the break up of a merge cause 3 to vanish. After much hunting I found that Roon had altered the artist and inserted Ludwig van Beethoven in front, something I later observed was a similar error on the Amazon site or Allmusic, cannot remember which. I guess that was because Roon is linked up to some of these databases who, sadly, are not free of errors.