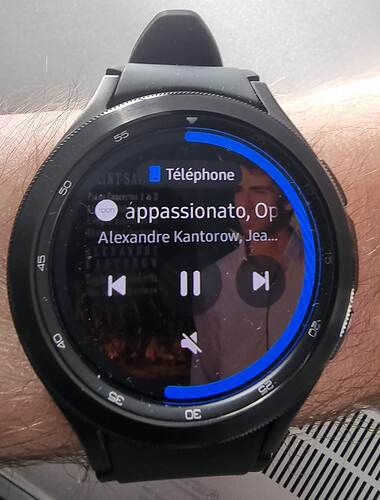 I was delighted to see that I can remote control Roon from my watch (see picture) when Roon app il launched on my phone, by standard Wear media control. Play/pause, next/previous track, and even time bar progression (around the watch). But this is 75% satisfying, not 100%. What are the 25% ?

If there were a dedicated Wear app, wich directly talks to Core, these problems would disappear. And it could display Roon specific informations. I know : this is probably too much work for 25%, but maybe not ?

Not much users of Android Wear out there !

By the way, another issue with the generic media controler, which could be solved by a dedicated app : after a time, the Roon app in the smartphone goes to sleep and no longer refreshes the watch display (wrong track title etc…).

I know. I am the only guy in the universe to have an interest in this topic, but I have some findings to share, just in case Roon is reading. Perhaps there is only some elementary changes to do in the Roon android application to do.

The difference is maybe that other applications OUTPUT MUSIC on the device. Roon application does not output music, just control music. Maybe if Roon android app can output a fake audio stream, or something like that, the Wear controller will stay connected ? I feel we are not far of the goal.