I have a roon usage modality where I explore new music on Tidal and once I find something I like I buy physical media. After ripping/importing roon always chooses Tidal as the playback source. Usually it takes some finagling to get roon to play local content vs Tidal stream and sometimes roon will always default to a Tidal stream and that is where the annoyance blooms. Roon is supposed to play local content vs Tidal as a default - that never happens for me. A good example is happening to me today. I ripped and cd and unless I am logged out of Tidal roon will always play from a Tidal steam. No ‘other version’ selection shows up for the album I ripped??? Am I missing something here? I really like the overall roon experience but this issue I am finding to be more and more annoying. Can someone in the community help me get past this irritant?

I ripped and cd and unless I am logged out of Tidal roon will always play from a Tidal steam.

How are you starting playback when this is happening?[quote=“chris_barney, post:1, topic:27669”]
No ‘other version’ selection shows up for the album I ripped
[/quote]

Is the ripped CD in your library? If so, maybe you can post some screenshots of the local and TIDAL copy?

Hi Chris, I too, purchase the media if I like an album that I have found on Tidal.

I make sure that I delete the Tidal version from my library before importing my purchased version, that way you never have this issue in the first place.

How are you starting playback when this is happening?
Play genre. When artists track is played always the tidal version is played.

After importing cd there are two copies of ‘Gigantoid’. Neither shows the content source so it is a quess which one is streaming vs local.

Selecting the first one shows that it is Tidal sourced. Note that there is no ‘other version’ link displayed.

There’s a small TIDAL badge in the top left corner of one of the two editions of the album – does that help?

Can you post a screenshot of the Storage tab of Settings?

Also, how many files are in that Gigantoid folder?

I often play the Tidal Version as the Artist I like and support gets paid over and above my CD purchase. Quality is the same.

That is an excellent reason. I would do that with Spotify if it was lossless.

I never considered the artist royalties on streaming content vs CD - that is compelling reason to keep the Tidal versions around, Thanks Chrislayeruk for pointing that out.

Also, how many files are in that Gigantoid folder? 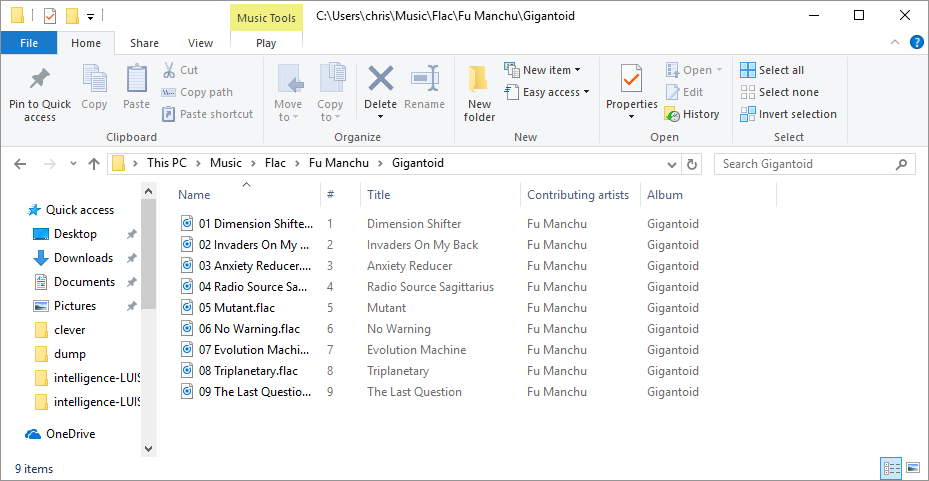 @Chrislayeruk, do you have any info on how many times you need to play from Tidal to pay the Artist more than the one-off purchase?

Nope, but if you don’t play them, they get nothing. Every little helps …

Every little bit does help, but my guess is that there are a significant number of (obscure) recording artists who never see a dime in royalties from streaming services. For example, my brother’s group’s albums are widely available on the streaming services. He handles the finances, and he says he’s never received such a check. (I’m guessing the record company is pocketing the likely modest royalties, and for the record company all those little bits probably do add up.)

If you want to support an artist who’s not well known, the best course is probably to go see them live and buy their CD at the gig (and of course I’m aware that @Chrislayeruk does his part and then some).

Quality is the same.

Only if not Universal Music Group audio watermarked.

I wonder if they know how often they are played?
It’s hard for new bands to break through and I often have people ask me ‘What’s Tidal’? They know Spotify but that’s it.
When you think about it, people have the choice to play any music from the history of recorded music and one expects them to play theirs… Thats a big ask.
That’s why I love to support independent live music. Independent doesn’t mean amateur. There are some world class acts out there that get little recognition.
Currently enjoying Carter Sampson and The Flyin’ A’s but I could list many.

I can’t hear that.

I wonder if they know how often they are played?

No, and I’m not sure they have a way of knowing, short of hiring a lawyer to deal with their record company. Clearly, they’ve made a determination that it’s not worthwhile to pursue this.

I saw my brother last week and told him a bunch of the Atlantic Brass Quintet albums were on Tidal … and he was completely unfamiliar with Tidal, as you say.

That’s true. I’ve gone back to uploading CD rips to my phone for some favourites alongside Tidal because I find the watermarked albums barely listenable to.

A ploy to get us to buy new CDs?

Check out the info here

The samples and difference file clearly demonstrate the effect of watermarking. The effect may be less noticeable on some material.

I can’t explain why, in your screenshot, the Gigantoid album, Flac version, shows 2 copies apparently from the same location on your hard drive. @support will have to look into that.

Regarding the Tidal and Flac Versions and playing Tidal, if you View the tracks of each album, does one album show “Duplicate” above each track? If neither album has Duplicates, it makes me think that Roon is considering it 2 separate versions of the album. These album can then be Grouped by viewing both albums and then right click (or long press) the two albums (Tidal and Flac), then Edit and then Group Alternate Versions.

This should make the Flac version the one shown and the Tidal the duplicate. The Tidal version can be viewed by clicking Other Version button. From there, you can also click the 3 dots icon and Remove From Duplicates, if you want to go back to two separate albums.

Note that Roon will make the better quality album the main album and the lower quality (or Tidal) the Duplicate.