Roon finds the correct cover and album labelling but then misidentified the Sonata as a cantata Op 50!! Yet all the other tracks are correctly identified.
I guess I can edit the track data but find this error rather mystifying. 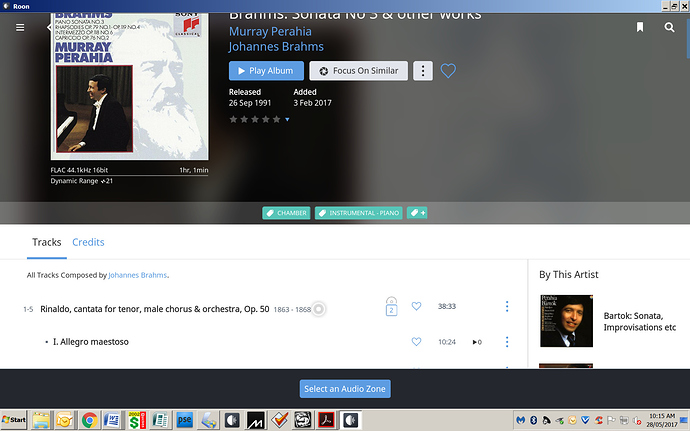 I am getting the same result with this album. Edit/Identify has no effect.

I had to edit the tracks so it read correctly.
There must be something add about those tracks as Sooloos displayed them without any header.

This looks like the same opus number “upgrading” issue (appended zero) as discussed here. Brahms Sonata No. 3 is actually opus 5.

I have two recordings of the Sibelius Karelia suite in my library. Both albums are properly identified. During the identification process, the appropriate tracks are properly identified as the Karelia Suite. However, when viewing the albums, the work is incorrectly displayed as Väinö’s Song (Op.110) in both cases. Note the appended zero in the opus number. Interestingly, when the tracks are played, the correct title (Karelia Suite) appears in the Playback bar at the bottom of the screen. […

@joel has assured that a fix is in the works.

What @JWC said: it’s not you, @JOHN_COULSON, it’s a bug in the automagicworkmatchingthingy.

it’s a bug in the automagicworkmatchingthingy

No it’s not. It appears to be a metadata update bug which we’ve not yet reproduced in-house.

In my library, the Brahms Rinaldo exists as part of Claudio Abbado - The Decca Years, a seven disc Tidal set… When I edit the piano sonata (in the composition editor) to the correct title, the choral work’s title is changed to the sonata title.

It appears to be a metadata update bug

Does this imply that none of my album metadata is updating as the Roon sources improve, or is the issue specific to opus numbers? The former case would be quite troubling as it implies some unknown number of users may not be fully benefiting from the portion of their Roon subscription fees that are being paid to the metadata providers.