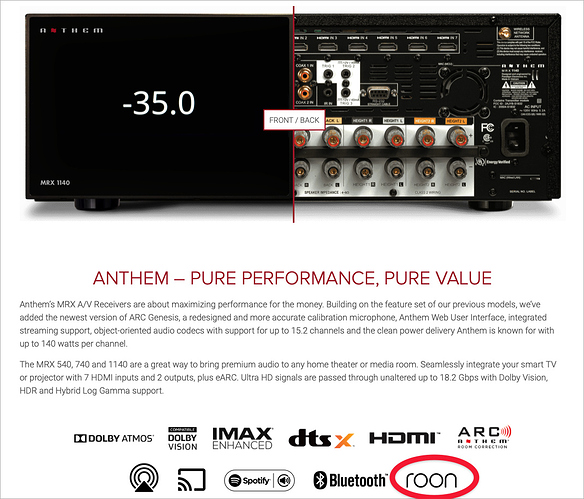 If I were you, I would wait until Anthem are actually listed on the Roon site as a partner.

Roon plays with everything and we've partnered with 75+ Roon Ready Partners ranging from Network Players to Audio Devices and Roon Core Servers.

I see the symbol there, but they don’t say anything about it, do they? I couldn’t find it. And Roon doesn’t have them listed on their partners page, do they? Not under the 'A’s, anyway. Are they a part of some larger concern?

This may be marketing misdirection.

I wish I had an Anthem contact. I’ll see if anyone can get me in contact with someone who’d know.

In other documents I’ve seen for this they mark the Roon support as Coming Soon!

That’s how customers are misled and end up raising similar topics in the forum… Thumb rule is if it is not on ROON site, don’t buy it… The timeframe for certification is not defined…

they mark the Roon support as Coming Soon!

Quite, it’s more than likely to be released with no Roon certification. However it is exciting to have this brand support Roon, assuming it ever arrives.

Would be great if existing models (I have an MRX 720) were able to become Roon Ready (when eventually confirmed) via a firmware update - but I won’t hold my breath. Great AV Receiver - had Arcam for years but the Anthem is miles better.

If the firmware update for the MRX-1120 that was promised for Autumn 2019 is anything to go by, I wouldn’t hold your breath.

There’s basically 0% chance of this ever happening. The network stack in the AVM60 and MRX*20 units hangs off the DTS Play-Fi stack and it’s not actually native to the MRX core. It’s also crazy buggy and limited. It looks like they have a proper network stack in the new units since they’re able to support more sophisticated streaming (AirPlay, Spotify, Bluetooth, etc). I doubt the hardware in the last gen units is even remotely capable of running a Roon endpoint.

Thanks, I figured as much. Play-Fi is garbage.

I contacted anthem support via email and they responded that the new mrx receivers will be room ready.

I’m ready to pull the trigger on either an AVM70 or an AVM90 but I’m not doing it until I get the Roon certification.

Any new news on this?

I’d wait until others have reported positive success with Anthem and Roon.

My experience w/ Anthem has been terrible software that never worked as advertised. The sound is really good but the remote app (something trivial to implement) was terrible. For starters the remote app didn’t show up on the app store for over a year despite being advertised by them as a feature. Play Fi is as bad as it gets for a user experience.

My money would be on NAD if I were to do it again.

I’m in the market for an MRX 540. Already sold my existing HT electronics and waiting patiently for the new Anthem units to drop. Really counting on the RoonReady certification. I might wait until that comes along before actually buying. I’ll see if I have the patience…

…no eta for Roon on the AV70. After firmware update the AV70 did show up as an airplay target…oh great

Thank you for being our guinea pig here - I have an AVM60 that I plan on replacing with either an AVM70 or 90, but not until it is working properly with Roon. They are both too expensive not to be in 2021!

Well I did not do enough homework…I can use roon via my oppo but that’s not why I bought unit. I mistakenly assumed the 70 could stream tidal or quobuze but that is not the case.

They also told me that the remote app for the MRX 720 would work but it didn’t for 2 more years. Buyer beware.