Any experiences with the Aries G2 yet?

once again: is the G2 really worth used, mostly, just as Roon endpoint? (… and Qobuz streaming

)
(at present I’m using an Aries “femto” powered by a Vinnie Rossi Mini Pure-DC-4EVR LPS, and I’m very happy with it)

and… no issue with Chord DACs, right?

@Quaerit is using it with a Dave. But I guess that doesn’t mean it works properly with all of them especially if you are using a purely bus powered Chord.

A new G1 is getting announced at Axpona I just read on the Auralic forums.

Can you try before you buy? I would assume it wouldn’t be a big upgrade over what you have right now, but you never know.

and… the G1 is supposed to be top of the line?

unfortunately I have to order the G2 expressly for me (and pay a deposit in advance). looks the local reseller, and the official italian importer, are only going for the Vega G2

No the G1 is the more cost effective replacement for the original Aries. G2 series is top of the line for now.

ok, thanks: I’ll have a look at Auralic forum

If you enable Airplay for only this purpose, Auralic does recommend only enabling the minimum services for maximum sound quality. You could use Lightening DS with Tidal or Qobuz instead to play the album.

I know you switched to Wifi recently, thought I should pass on the other sound quality recommendation.

Yes, I have the ambition of testing Lightning DS. As far as Airplay goes I’m only switching it on when I use it and back off afterwards.

I’m turning Airplay off since I presume and somewhat trust it can make a difference. My own testing with Roon and various music formats and songs show very little, if any, difference between keeping Airplay on or off.

@Quaerit Can you pls elaborate on how much of an improvement you can hear with the Aries G2 > Dave vs PC > Dave? Is it a very marked audible difference or more of a subtle one that you notice through numerous back and forth?

I can it try this weekend. @ciukas I like these kind of experiments!

As you probably read I did audition it against my old mRendu and it’s succesor — but never against just the Mac mini. I’ll be back with impressions!

Can someone tell me if, when the G2 is used as a ROON endpoint (therefore, NOT using lightning DS), the LCD still display the cover Art and tracks infos, and also if the 3 front switches “previous tracks”, pause/play and “next track” are still effective (as an alternative when the iPAD is not at hand)

It does everything the same. Art, track info and appropriate function buttons.

whilst at it… Aries “femto” display (no cover art, just “track#/#of total tracks” and “elapsed time”) stalls (showing 0/0 and a non increasing elapsed time from some previous track) when playing a “composition” (work with movements): has this been fixed on G2s?

We were three people listening: one changing between the the sources and keeping the score and two people listening (and we changed places during the test). What I, and my two friends, noticed was a clear improvement having the Aries G2 over just having the Mac mini feeding the Dave directly. My system is what you would call revealing and neutral. We discussed a bit afterwards if this is something most normal people would discern. Our guess is that most people probably wouldn’t even though we all picked roughly 80%+ correct between the three of us.

That’s 80%+ when we switched quite often and the brain started to mix up perception, so it’s a high number for these kind of tests. But with this said I have friends that listen to music from bluetooth speakers with no musicality that probably would fail miserably in this blind test. The changes are more about musicality, timbre and the base being more controlled. They are not subtile if you know what to listen for, and even when not concentrating the changes are there – definately. Things that I have sometimes a hard time describing.

After the tests I moved the Mac mini back to its original position two rooms away from the rest of the setup. Playing once again and it, probably, sounded as good as ever. Perception and the memory of a certain sound characteristic is difficult, but with the server in another room the Aries G2 sounds at its best.

I have a Auralic G1 and its not even close between my imac , macbook pro and the G1.

I would say 80%+ in a blind test is an easy win. Some argue that there must be 90%+ but they must know very little about human senses and perception. I have performed blind tests many times from wine to chocolate to coffee to music. It’s sometimes impossible to notice the difference between a good Champagne and a nice Italian Prosecco after six or seven sips. Both are good in their own right but I can easily taste the difference if you just give me one of them. So even though perception messes with your head after a couple of switches in a blind environment, we came out with a clear winner.

Also: My Mac mini is modified, runs only the bare minimum of things and has a linear power supply from UpTone Audio. When moving the Mac mini away from the source I believe it sounds the best. But for the sake of a good A/B test we had the computer next to the rest of the equipment.

If you are using Auralic as an endpoint I suggest getting a Aries Mini instead. All the processing is done by Roon in a PC/Mac and unless you use G series as a stand-alone with Lightning DS on your iPad, it is just not worth spending thousands of dollars for an endpoint.

I have quite the opposite experience. The Aries G2 was a big difference from the mRendu with LPS (that frankly gave about the same performance as my Mac mini directly).

I started running the 6.0 beta firmware a couple days ago. It now allows upsampling when Roon is the source. I always wanted to hear what the Auralic algorithms sounded like.

In fact Roon now reports that the Aries G2 is doing the upsampling. Very cool. 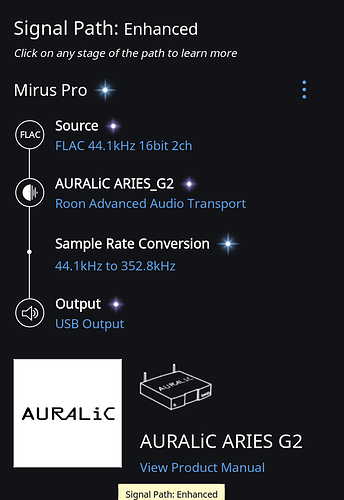 I Have my G2 connected to a Schiit Yaggy w/ Analog 2 Update via AES and it feeds a Schiit Ragnorak Integrated. My only experience with streaming prior to that set up was with a PS Audio Direct Stream Bridge II. The PS Audio DAC was fed by JRiver on a Baetis Revolution server. The sound was excellent but the dollars are quite a bit higher than the new set up with the G2. Dollars set aside the G2 really was impressive. My high res music and Tidal both sound real and I’m enjoying listening to my music so much I hate to hit the stop button.

Has anyone compared the G2 to the DCS network bridge?