Anyone compared a Pi 4 to something like the digital out of an Auralic Mini?

I’m thinking of having a little play with the new Pi 4 as a Roon endpoint, I have the Auralic Mini doing this duty at the moment but I think its overkill for just streaming Qobuz as I do now. So I have a cunning plan! If I can get a comparable SQ from the Pi 4 on USB out feeding my Mojo DAC I can sell the Mini and put the cash towards a proper separate Roon core server (so Roon is available whenever I want to play it and I’m not using my MacBook for core and control when it is being used for other duties pretty much all the time).

I wondered has anyone had both these options or compared them? I know it seems a retrograde step to go from a dedicated bit of hi-fi to a DIY SBC solution - but USB is USB and aren’t these expensive streamers nothing but computers with some clever board isolation? (glad I didn’t say that in the Auralic group!

I have not heard an auralic but I have used an Allo digione, use spdif not usb, but it sounds fantastic. Anyway, I think you have a great plan and can’t wait to hear your findings.

I’m interested too in your findings.
I’m using a Pi 4 USB with ADI-2 DAC and it works fine (RME has a good USB implementation), and I would expect the same from Chord Mojo.

That’s heartening news both, thanks! I’ll update this post as I go

On the ADI forums, there are reports of pops and clicks with a Pi3b, the Pi4 is reportedly solid via USB.

@Tim_Woodward nothing like a cunning plan! Good luck, and report back

Well she’s up and running without too much trouble, love the Flirc case!

I am having a bit of bother with getting the WiFi to work so thought I would take the DAC to the device instead and plug in my headphones to just have a quick listen. That was four hours ago and the Mojo batteries just died!

I’m actually quite gobsmacked, i expected perfectly respectable usb output, you know, perhaps a little glare or hardness, maybe a tad bright, but perfectly serviceable. Instead I am getting a sweet top end, loads of detail and plenty of slam… I haven’t hear the little fella in the main system yet, through my amp and speakers, but the HD600’s I only normally use for critical listening and almost exclusively classical - and so far I am unexpectedly impressed, At this rate I might need another little Pi for the bedroom as I’m pretty certain she out performs the usb output on my MacBook I usually use for critical listening.

Anyway, bed calls and tomorrow I’ll be hopefully checking her out against the AURALiC Mini in the main system - but it’s looking (and sounding!) very good so far! 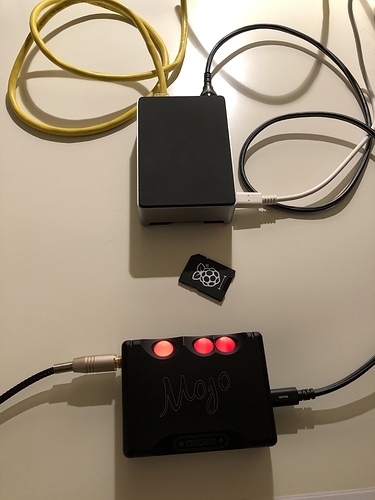 Well, I thought I better report back! After eventually getting wifi to work I could place the Pi in the main system, again using the Mojo as a DAC and with a recently purchased Audioquest Pearl USB cable (nicely run in on with a week or so’s headphone use - and yes it did need burn in, I know, bloody crazy but there you are - £25 for a USB cable, nearly broke my heart!

). So I’m now listening to a Hi-Fi Test playlist I made yonks ago (when I used to play a lot more with switching components in and out) and, well, how can I put this… and not to put anyone off buying an Auralic Mini as it does so much more than the little Pi Roon endpoint, but… Wow!

This sound is astonishing! I’m not sure I could explain it without all those old audiophile cliches but its blacker between strands for sure, like the music is etched, detailed and all that - its lifted right out of the speakers. You can hear right into the mix, the Mojo seems able to lock onto the finest of detail now and make proper musical sense of it without ending up with a load of digital glare - like I say its etched, transparent maybe. Just lovely. I’m chuffed!

I know USB has a lot to do with your DAC and how it handles what’s shoved at it, and we can’t really say why some combinations are better than others, even if we do rationalise the measurements and give it names. Noting the difference between my old stock USB cable and the Audioquest nearly got me into checking out the various USB ports and maybe Ethernet vs wireless - but I just stopped myself in time! My name is Tim and I’m a recovery audiophile…

So you are basically using the Pi in place of the Poly?

Well I was only listening with headphones as I couldn’t get the wifi to work and there is no Ethernet near the main system, so I just pulled the Mojo from regular DAC service (which I do whenever I want to listen with the headphones) and thought I would have a listen whilst waiting for some support. But yes, I was thinking of a buying Poly, but after hearing this I couldn’t possibly justify £499! So I am thinking of getting another Pi4 and maybe a battery pack? Sort of DIY Poly yes!

I was impressed on headphones, but it wasn’t until I got the Pi into the main system that the magic really happened, the system was obviously underperforming before and it now really sings. I certainly can’t fault the Pi4 USB out into the Mojo.