Anyone having an issue with the Sgt. Peppers 50th anniversary set?

The set remains unidentified. Roon shows discs 2, 3, and 4 despite that disc 1 is there, organized exactly the same way in a disc 1 subfolder. Of course, disc 1 I’d really love to listen to. Tried to have it rescan, etc.

Hi @James_I. Can I check which edition you have? There are at least two disc and six (4 CD + 2 BD) disc versions of this set. Have you ripped them yourself or was this a download. Can you verify that both the tag metadata for disc number and the folder structure make sense?

It’s the version with 4 CDs and then a BD and DVD. Only the CDs are ripped and in that folder. The metadata for disc 1 makes sense - it specifies disc 1 of 4, and it’s the same as the other 3 discs that do show up. The folder structure is just 4 subfolders, one for each disc.

James, it would be really useful if you could post screenshots of your folder structure and the metadata (using your preferred tag editor). If I can’t see anything obvious from that, I’ll hand this over to the support team.

Thanks Joel. I will do that ASAP. My clients seem to think they have priority over my Roon listening today… 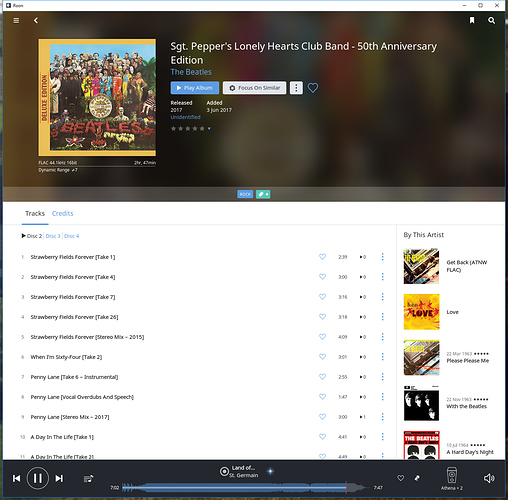 Screen cap of Foobar with most of the tracks from the CD Set: 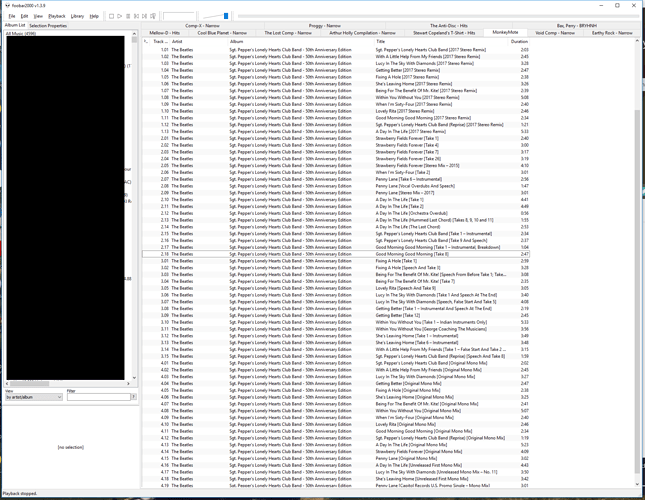 Metatags for all the tracks in disc 1: 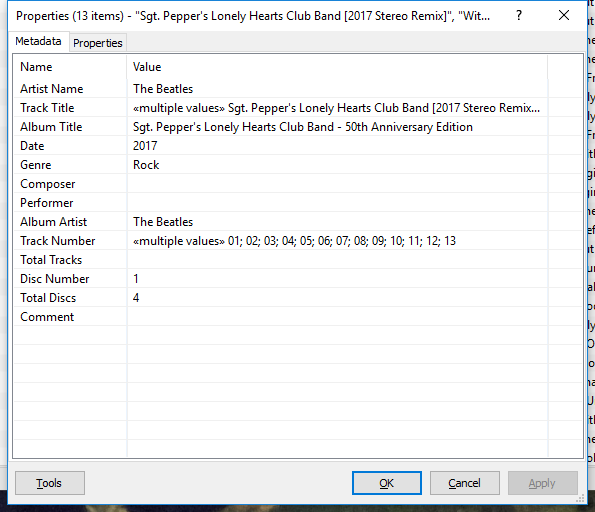 Metatags for Disc 2 as a comparison: 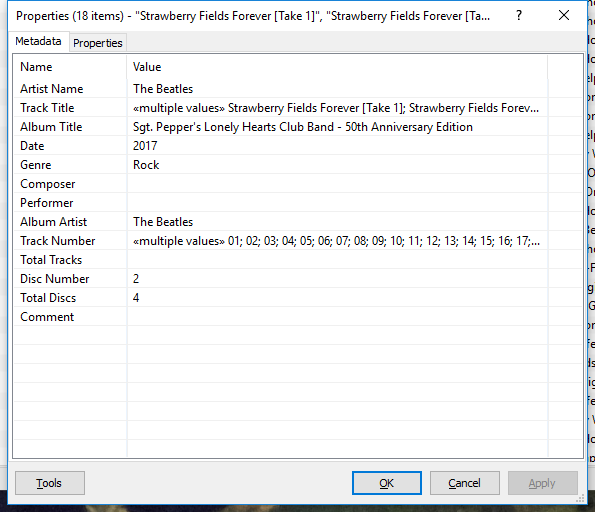 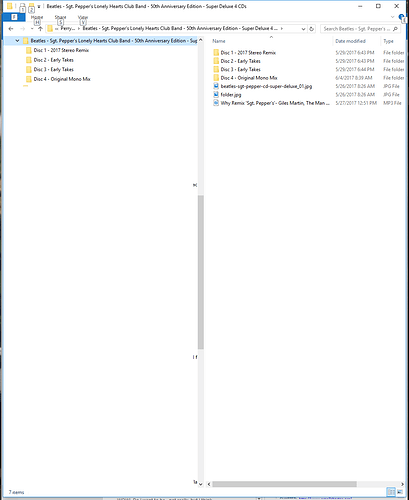 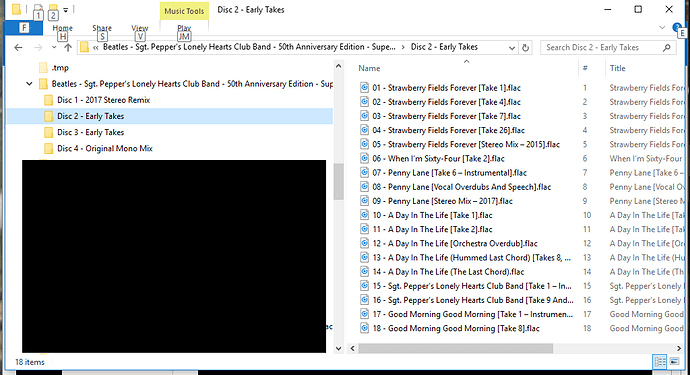 Hi James, the obvious thing is that your folder structure does not follow the Roon recommendations for multi-disc sets. Please can you try renaming the individual disc folders to CD1, CD2, CD3, CD4 and see if that solves the problem?

Sort of tried that - changed “disc 1” to “CD1” but left the additional information (the contents of the disc) also in the folder name. It didn’t work. Tried rescan but no change. While it might work to just use the foldername “CD1” this eliminates the information regarding what is contained in each disc. Given the rest of the folder structure is pretty clear, and the metadata clearly identifies each disc number and how many are in the set, I’d expect Roon to be able to get this.

I love Roon and I want to make it work with my collection. But I’m not going to eliminate useful to critical information in order to do so. Roon should be able to identify this from what it currently is. Especially since it finds discs 2,3, and 4.

So you didn’t follow the guidelines… I’m not really surprised that Roon couldn’t make sense of it.

I can’t argue that I didn’t follow the guidelines precisely. But I don’t think the guidelines should be so stringent so as to render critical information unavailable. It doesn’t seem good software design to require me to eliminate from a folder name what is in the folder. This would be even more damaging if the multi-disc set was like the recent Bowie sets that were different albums. Sure it wouldn’t matter if one only EVER interacted with our collections through Roon, but that’s not practicable.

So, point being, I just don’t think Roon should require NOTHING but “CD1” in a folder name, and it doesn’t seem like it really is necessary, given it identified discs 2, 3, and 4 with the same format, and the metatags in the media clearly identify the tracks as being disc 1 of 4.

Could`nt it be that disc 1 has been allocated to a different album under a different name ? Have you browsed your Beatles collection just to see if such an “unknown” album is not hiding somewhere ? This frequently happened to me in the past, when I thought that an album was lost, whereas it was errnoneously assigned a new name. If this is you case, you can merge it with your current 2-3-4 album.

As for your folder structure, it is perfectly correct, as I have dozens of multi-disc albums similarly organized. Your discs are correctly identified by disc numbers. Using CD1, CD 2, etc instead of your current won’t change anything here. I do not understand Roon position here.

Could`nt it be that disc 1 has been allocated to a different album under a different name ?

BINGO! Thanks Andre. Disc 1 wasn’t showing up because Roon saw it as a duplicate of the other 8 releases of this album that I have - so when I went to “other versions” it was there marked as a duplicate. But only Disc 1 standing alone.

Still I think it should have combined it with the other 3 discs. During the merge process Roon seemed to object that I was making this Disc 1 because it was also a duplicate of the mono versions that make up Disc 4. So I don’t think Roon metadata is aware of this release.

Given the rest of the folder structure is pretty clear, and the metadata clearly identifies each disc number and how many are in the set, I’d expect Roon to be able to get this.

Hi @James_I, perhaps, but “clumping” (the official term) of your music into albums is actually a very difficult task to do cleanly, quickly, and effectively over collections of all sizes.

Precisely because of the existence of duplicates with the same file tags, it’s critical that we narrow clumping to a localized area of your folder structure; but we have to cope with good metadata, bad metadata, inconsistencies between tags and folder names, no tags at all. It’s horrible.

I understand why you want to keep your folder structure the way you have; unfortunately, in this case, it’s incompatible with our algorithm (which is not something that we change lightly). I suggest that the best course of events is to merge the two separate “albums”. Please let us know if you require any assistance doing this.

HI Joel - that’s what I did. By no means do I intend to diminish the difficulty of coding Roon to accomplish all of this. It’s fine as a workaround to have to change folder names. I’ll just expect, some day when you declare Roon “mature” that it will be able to handle this without workarounds. For now, though, I’ll just kick back and enjoy the music through Roon!