Anyone with an idea about the text and a question 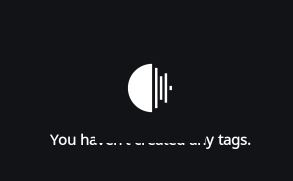 topic says it all … happened after I payed with sticking all my ‘LIVE’ tracks to a new tag named LiveTags and since then I see this.

@support
Perhaps on an upcoming build could someone remember to adjust the placement of the text and of animated graphics? T.I.A.

Another thing. I added more but 8000 live tracks now and get a thumbnailed view. Is there any change to turn this into a listview? 8000 items is really uncomfortable this way, especially since live tracks mostly share the same album pic.

Thanks for reaching out, @StefanB!

Can you verify what screen you are on when you see the issue reported? I’ll be sure to pass this along to the team for further investigation.

Another thing. I added more but 8000 live tracks now and get a thumbnailed view. Is there any change to turn this into a listview? 8000 items is really uncomfortable this way, especially since live tracks mostly share the same album pic.

When viewing the tag you can select the dropdown where it shows View All and select View All Tracks. This is the equivalent of going to the Tracks browser and selecting the tag.

Can you verify what screen you are on

I think it was because (first time) my slows Synology came close to 100% cpu utilisation. After having added the +8000 tracks to the new TAG roon became somewhat clumsy. So I tried to switch to the TAGs menu and there this display was taken. Took some minutes until it was gone while the complete menu/screen was empty. Looks as if filling up the items for each tag isn’t done chunked or similar but the display remained without any defined tags shown until roon populated them all (that’s what I think did happen).
roon was still responsive at that time, since I reached for the tags menu which did not show a single tag being defined yet.
After roon populated the tag with the +8000 items all previously defined tags did show up though.
A 416play syno … nice enough roon works at all, and I’m happy it does. And I’m aware it’s way below what roon recommends, so I’m happy I know found at least 1 workflow which backs up your recommendation. And I can live with that.
This tag is mainly designed for working on my collection, so nothing I would bother too much. Since I know how to get this solved … a faster machine for the roon core.
So it’s also likely one won’t see this partitial text with the pumping roon busy icon in front, since on a faster machine it’ll be gone within seconds.

thanks for the view all … view all tracks …this works as wanted.

@dylan Back with some more info in general about this.

Did a small animated gif … which does show what happens.

Watch for the “This tag is empty” message.
It depends upon the number of tags and the amount if items / tag.
Means in this example (choose because I wanted to short and fast animated gif) it’s next to invisible in realtime. If I use this upon a tag with 8000+ tracks it takes minutes.

The problem I see is a missleading notification, especially since one’s entitled to work with roon while this happens. Means you can still look at differnt tags, you can even select them and go into EDIT mode and delete them since being empty.

Perhaps the message could get turned into something like “be patient … loading” and only in case there’s nothing in the tag the message should say “This tag is empty”.

Thank you for sharing this gif with us, @StefanB!

I’ll be sure to pass this along to the tech team so they can take a closer look at this.