I’m just using this one as an example. Looking in allmusic, it has the album and a review. However, when I search in Roon it can’t find it and no review appears. Any help appreciated.

I have full metatdata (review, pick tracks, etc) and I can find it searching for “Selected Ambient Works 85-92” 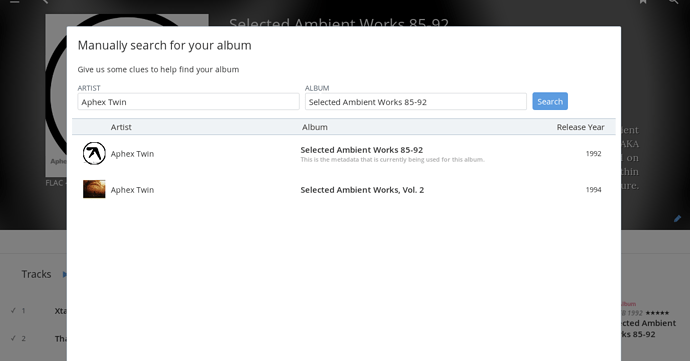 Wondering if something in your album tags is breaking the search? Let me know what you have for the album search ok?

Works on my CD rip of it. 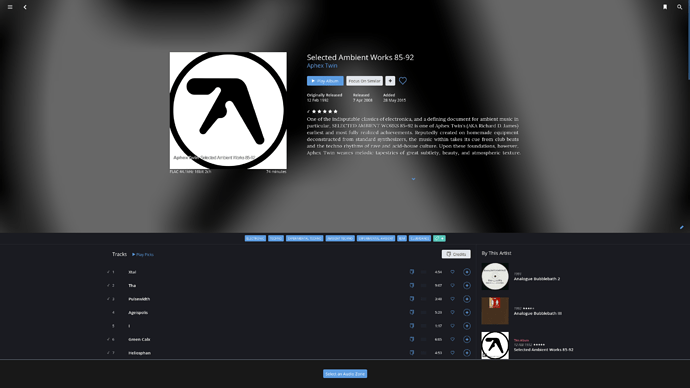 Nothing at all was coming up when I do the exact same search as you.

I’m wondering if it’s an Internet connectivity issue. I’ve had a problem with some web pages loading fine each time (bing.com), but other pages being very temperamental as to whether they load. Sometimes they won’t, other times they do, sometimes there is a wait. This is on a new Win 8.1 machine connected by ethernet to an apple extreme router, in turn connected to my Tecnicolor modem/router (supplied by my ISP Plusnet). On my MacBook which connects to the same network via wifi, there are no issues.

Networking is my weak point when it comes to PCs. Anyone have any thoughts what’s going on?

I just turned on my music PC for the first time since last night, and the album is now correctly identified and tagged. Does Roon do a re-scan for certain items on startup?

Edit: I’ve changed my DNS servers and that seems to have done the trick, for now at least. I have around 1800 unidentified albums in Roon - possibly because of the internet problem when it was doing the lookup. Is there an easy way to get it to scan my library again?

Edit 2: I’ve tried disabling and re-enabling all of my watched folders, but this doesn’t help.

Does Roon do a re-scan for certain items on startup?

Metadata is updated for your albums automatically every week, but only for the current identification. The match itself doesn’t change unless you select the album in the album browser and choose “re-identify” (or if you identify it yourself manually).

I have around 1800 unidentified albums in Roon - possibly because of the internet problem when it was doing the lookup. Is there an easy way to get it to scan my library again?

You could focus on Unidentified albums (under Album focus >Inspector), select all the unidentified albums, and choose re-identify, but if a lookup failed because of a network issue we should already be reattempting when you’re back online. Let us know if you’re seeing otherwise.

Dunno if something has changed recently, but Roon knows nothing about Aphex Twin the artist or Selected Ambient Works (I just added this album to the collection and noticed it unidentified and unidentifiable with manual searching)

Strange indeed, even though the album is identified historically 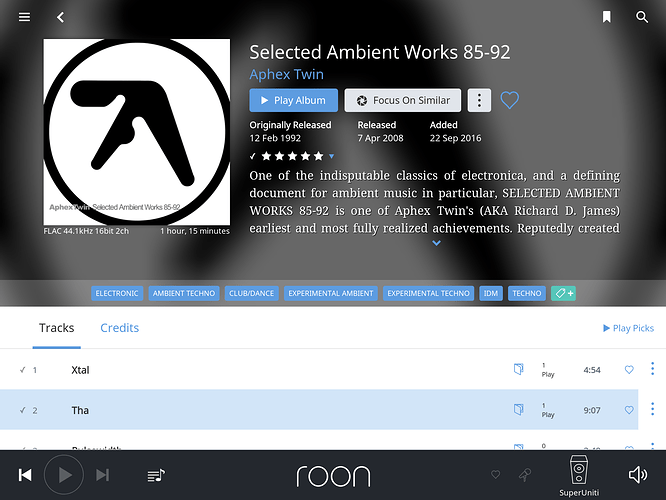 identifying it comes up with no matches 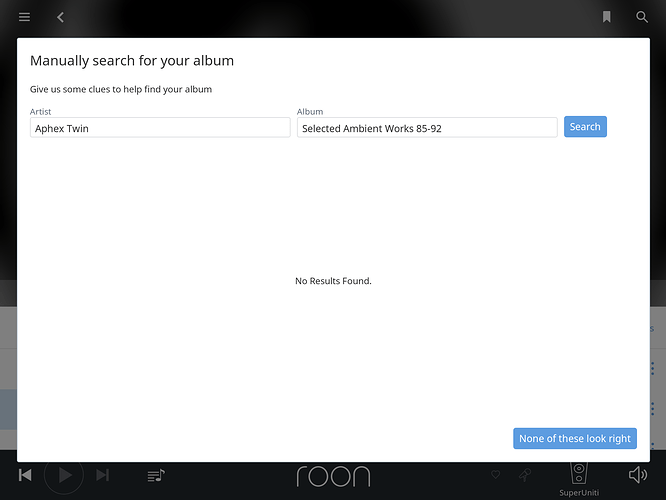 It’s not a connection problem as it works with other albums.

I’ve noticed the same too. There doesn’t seem to be any metadata available for any Aphex Twin albums.

Let’s flag @joel to look into this. 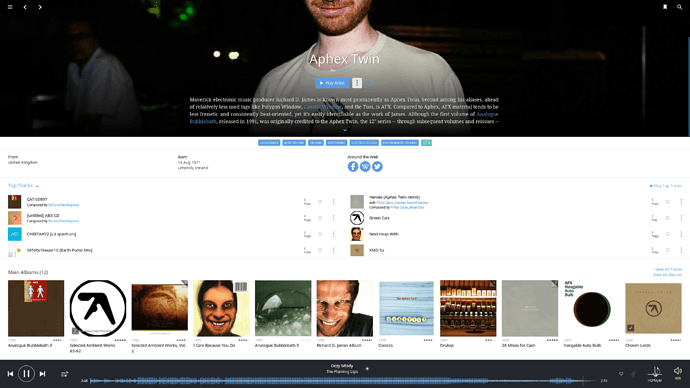 Yeah, that’s the same for me. If you identified the album previously, it worked and the metadata is there. However, if you go and try and Identify it now, the album won’t show.

So people adding the album now are out of luck. Us lucky ones that did it before are fine (at least for now).

Could it of come under AFX? I remember about half my Aphex Twin catalogue imported under that name and I had to manually edit some albums.

Good catch. But we shouldn’t have to know that.

Here’s what we get when we try to Identify. Nothing. 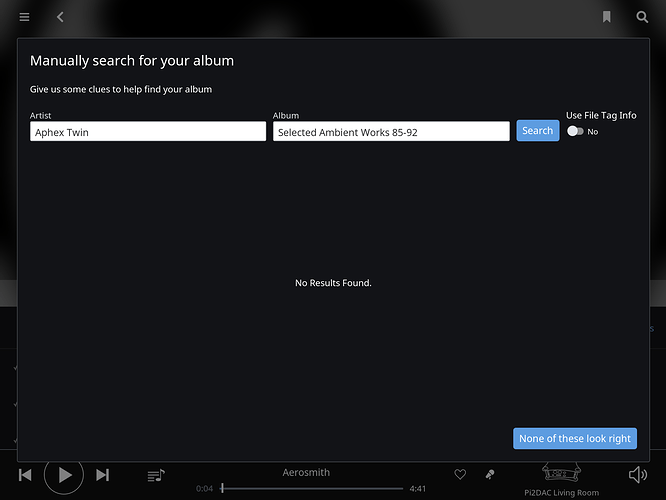 Here’s what happens when we leave out the Album and just search Aphex Twin. No Aphex Twin artist at all. 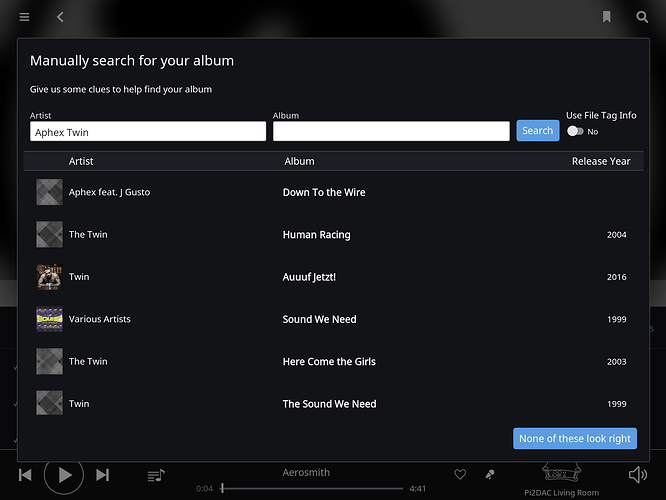 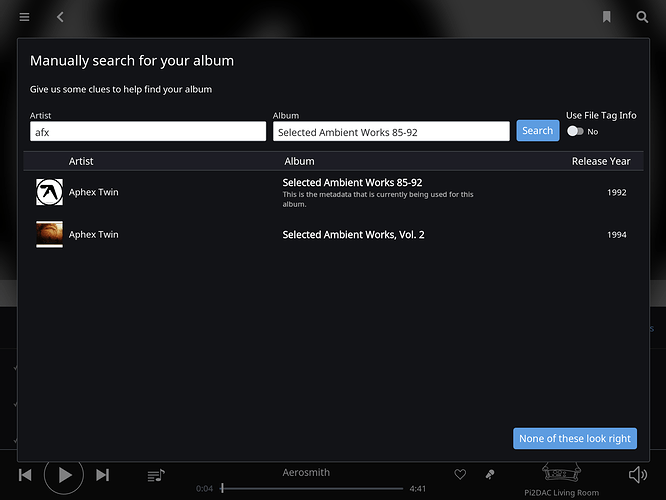 I think we need @joel to explain this one.