Yikes, Spotify paid her 23 Billies for the HiFi ad !?

And Spotify moves at a snails pace to their customer requests .Not a good look and I think their app on iOS is terrific.

Ironically, the post below yours lists the new Billie Eilish album…still not on Qobuz. Very much alive on Apple Music.

It is there on Qobuz. It was up ‘early’ for me because of my timezone (as I wrote).

It’s there now (on time, when you factor timezone…) on Qobuz US: 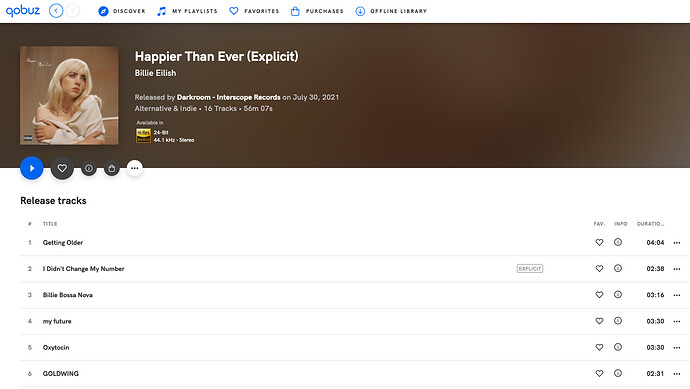 Not in Roon though !!! Had to listen via Qobuz integration on my system and not Roon. It is rather good though. Girls done well again.

Of course! This is a weekly issue, not a Billie/Apple/Qobuz issue, so not even worth discussing in this thread.

The technical reason for the weekly Roon delay of TIDAL new releases was explained 3 years ago. I don’t know if Qobuz is quicker or same:

I know what the reasons are , was just stating its missing. It’s still doesn’t make it less annoying.

2076, just in time for the USA’s tricentennial.

Yeah, really…When you increase your active user base by 22% YoY and still lose $23 million, you have a poor business model.

Well, they are still the leading streaming service, by a wide margin, with a $50+B market cap; they are doing just fine.

You have take the numbers with a grain of salt, especially with Apple Music. Apple has been aggressive in bundling Apple Music with stuff like cell phone subscriptions, which they count as a ‘paid’ subscriber.

Speaking anecdotally, I work with a bunch of kids (Millennials) and every single one of them has a paid Spotify subscription. I don’t know a single person that pays for or uses Apple Music (outside of myself).

Here are the numbers: Spotify is the world’s biggest music streaming platform by number of subscribers. Users of the service simply need to register to have access to one of the biggest-ever collections of music in history, plus podcasts, and other audio content. It...

I have only met two users of Apple Music. Everyone I know uses Spotify and a paid sub.

It is true, lots and lots of people around use Spotify, still, I’ve met more than two AM users. Myself have stopped using Apple Music 2 years ago, because after using ROON for local files, ROON had introduced Qobuz streaming and I switched.
Now, that lossless is finally here, took me a couple of days to re-adjust my habits. I still will use ROON for my local music, but for music that I do not own, Apple Music is all the way!
Do I miss the integrated collection, metadata and few other things with AM? Yes I do, but Music comes first!

Not surprising that young people should prefer Spotify as it is as least as much about sharing stuff than listening to music. I’m probably too old to get this. Spotify is in the business of collecting data and selling them - young people apparently don’t have a problem with that, nor with audio quality, nor with the fact that , of all the streaming platforms, Spotify pays artists least. Deplorable, really. With young people, true hifi is dead, as I’ve sadly come to understand with my own teenagers at home.

Don’t agree with that at all. In 50+ years I can count the amount of people that cared about hifi on one hand, yet I know more who care and love music than that. The two are not mutually exclusive and to think so is very elitist. One can enjoy music without any hifi. Spotify and streaming has replaced radio for a lot of people. You can’t blame the punters for something that’s being undersold by the industry.

Our parents probably said that when we all had walkmans and cassettes.

I’d be interested in Apple Music if there was a viable means to actually use their service without giving up my iPhone or iPad as the streaming device.

I have listened to their CD content and some hi-res content via iPhone, USB to DAC and was, hmm, impressed, sort of. But hated that I had to get up to change album etc. Laziness on my part.

Would like to see Roon with Apple Music support. The apples in Apples court I guess.

We obviously have different experiences. In my salad days (the 1970s) I honestly don’t remember anyone who was not interested in getting the best sound within certain financial limits. Sound as such was important then. If it still were, Spotify couldn’t possibly thrive, especially when you listen to your music on cheap earplugs.
Back in the day we all had to save up to buy LPs, and treated those objects with great respect. In a way we were all collectors. Now, it’s different. Anything you want is but a few clicks away, which in a way is great, but also destroys the power of true discernment, and invites people to consider music as just another commodity to be tossed aside once your appetite has been sated, which would explain why people support Spotify with its very average SQ and its minimal respect for artists in terms of what they actually pay them. I don’t see why you think I’m being elitist here.

To most people under the age of, oh, let’s say, 30-35, music seems like little more than wallpaper these days.

Oh, I’m sure some of you will respond about how much your son/daughter/niece/god-child/whomever really, genuinely, cares about sound quality, and/or just absolutely adores their vinyl collection. That’s great, but, I’m not talking about audiophiles who are much more inclined to try and push their habits & hobbies onto loved ones; No, I’m talking about the other 99.7% of the population with the Beats or the white knobs hanging out of their ears.

They simply don’t care…And guess what? Most of your grandkids don’t really want your audiophile furniture, either.

I know, I know, it stings, but, Apple makes, what is it, around TWENTY-THREE or FOUR BILLION dollars annually on Airpods alone?? Absolutely bonkers.

How far are you sitting away from your gear? I’m using a longer USB cable and can control my iPad from where I sit. SQ is great, it helps that the iPad produces minimal electric noise. To my ears AM via iPad (to DAC via dongle via USB cable) sounds better than ROON + Qobuz (I’m running Roon Core on a down stripped iMac connected to streamer via ehternet).

I could use a multipurpose USB cable as a skipping rope with my kids. I had done this but with kids it’s a little tricky. I sit 3 meters from my setup.

I’ve found a possible work around. I have an older iPad, and if it has switch control, I might be able to control it. It’s on iOS 9.??? I think switch control came with iOS 10. Waiting for the drained battery to charge to allow it to turn on. FUBAR old iPads