I just now looked at the desktop Qobuz app for the first time in awhile. They’ve added the autoplay feature that the other services have had for some time . Also noticed the My Weekly Q playlist(maybe an unfortunate name) which I’m listening to right now through and iFi dac attached to my Mac through Sennheisers. I have to say it sounds fantastic straight from the app. I do have an approx. 70,000 track local library but I’m starting to think maybe I should cut out the middle man and fall back to Jriver for the local stuff and Qobuz to stream. I also have Apple Music through the bundle, forget what they call it, but this is a demonstrably better sound than the AM desktop app and it auto-switches as well. 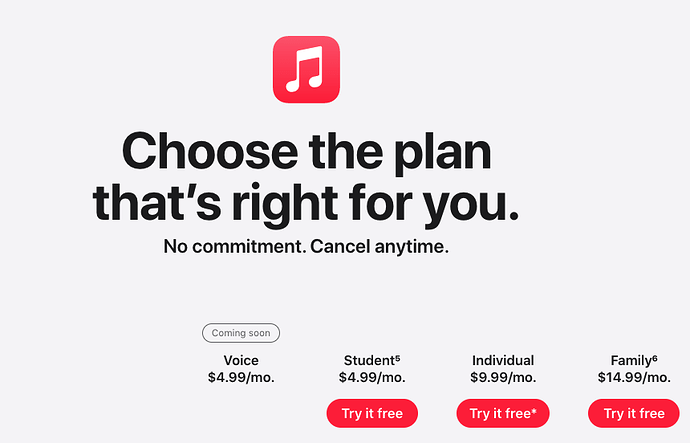 Here’s a little context on streaming revenues. The YouTube take is interesting/alarming

Here we go with the current year update. This data set is isolated to the calendar year 2019 and represents a mid-sized indie label with an approximately 350+ album catalog now generating over 1.5b…

Made by: David Lowery (musician) - Wikipedia 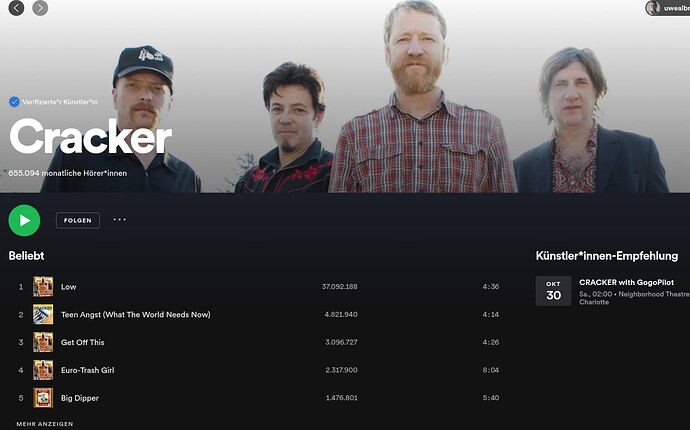 Certainly a fighter for the artists, with economic and also legal expertise, who in the fight formulates some position in such a way that it is easy to open clever other views and back them up with better facts. From this proven mathematician I would have expected sometimes more serious calculations. In the fight for rights, however, it makes sense to exaggerate one’s own position before making the intended comparison. There is certainly justified criticism of the payment. It just sometimes hits the wrong opponents. Both Napster and Spotify are the pioneers of paid streaming, not the gravediggers for what is more up for distribution today. The billion-dollar increase in customers and money is no longer coming from Apple Music or iTunes. They’re going that route now: up to 14 months of apple music fake-hi-res for free. Until then we will see more technology that can really do Hi-Res. Remember lossless is not Hi-Res. Qobuz does it better! 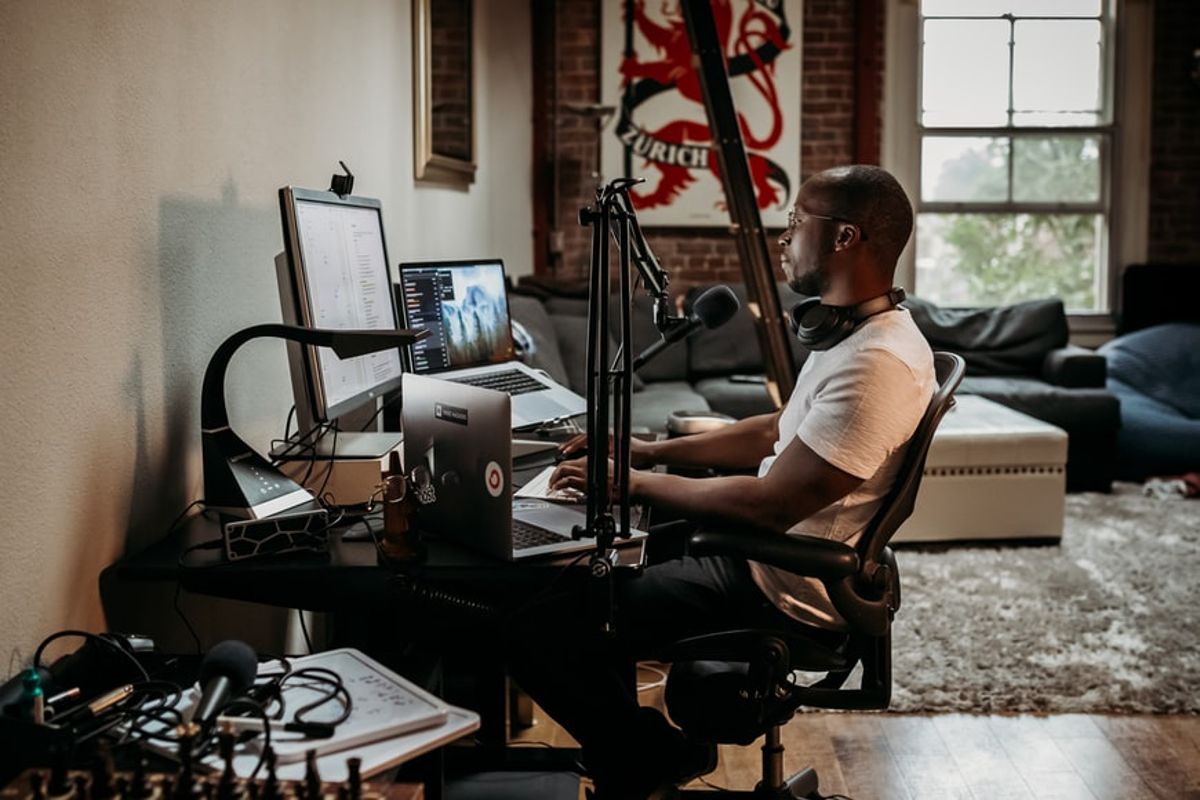 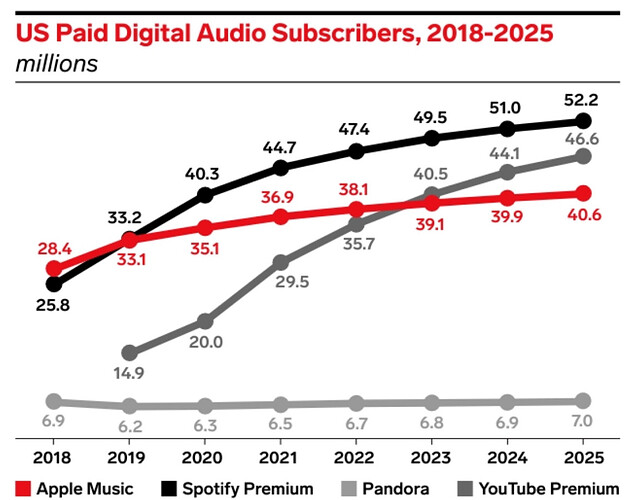 and now apple music more than one year for free… 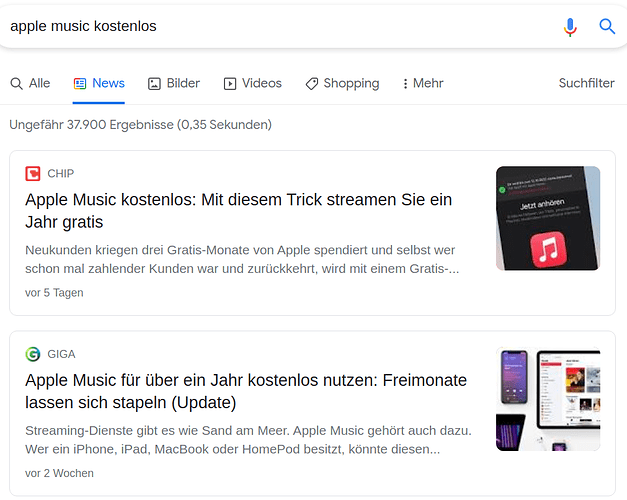 I also have Apple Music through the bundle, forget what they call it, but this is a demonstrably better sound than the AM desktop app and it auto-switches as well.

I’d be careful with claims like this one. To my ears Qobuz does NOT sound “demonstrably” better than Apple Music, Amazon, Idagio, or Tidal. They all sound the same, as they should.

Whether or not you agree, one’s ability to hear a difference between music played on one streaming source and another depends to at least some extent on the equipment you use for your comparison.

Of course, you are absolutely right in that the vast majority of people “don’t give a hoot about lossless, let alone hi-fi” nowadays. Similarly back in the 70s and 80s, hi-res was something for the enthusiast with some money to spare. Most people back then were content to listen to music from public radio stations through cheap mono transistor radios. That doesn’t mean to say that ‘lossless’ (Redbook or hi-res) music is irrelevant. Many people do hear the difference and are of the opinion that the difference is worth paying a premium for.

Admittedly the gap between ‘lower fi’ systems/devices and so called ‘audiophile’ systems has narrowed significantly since those early days. However, if you compare lossless music with lower quality music through the internal DAC of your mobile phone or laptop and cheap ear-buds as opposed to through ‘decent’ DACs, amplification and speakers/headphones it is hardly surprising that some of the nuances of the respective music streams are lost to you.

Of course, I do not know what devices/systems you have used for your comparisons, nor what age your ears are. My comment may not be applicable in your case. I personally have no desire to move to Apple music, and it has been a while since I gave up on Apple music. However, I moved from Spotify (MP3) to Tidal (lossless) a number of years ago specifically because Tidal sounded significantly better on my main hi-fi system (less so on less good devices). I thought the difference worth the extra money it cost me.

I would contend that if your ears are relatively young and healthy and you have a decent music playing system, then it is not too difficult to hear differences between lossless and compressed music streams. Of course, whether or not you believe the differences justify a premium cost, whether or not you actually enjoy listening to music or actually care about the sound quality of the music you listen to is an entirely different matter and entirely up to each individual and their individual circumstances.

I am not as young as I used to be and my ears consequently not as discriminating, so it could well be that in a few years time I could potentially be happy with Spotify or Apple music. ‘Unfortunately’ for me, I cannot envisage music listening without Roon, and so I am probably locked in to Tidal or Qobuz for the duration.

There’s a joke about Porsche cars: young drivers have the skills but can’t afford the insurance. Strikes me in audio, old(er) men can afford the equipment, but don’t have the hearing skills. But it’s actually not very difficult to hear the difference between AAC 256 and 16/44, not even for old men with even mediocre equipment. Now, where did I park my Porsche?

Now, where did I park my Porsche?

Not remembering unimportant things. A privilege that comes with age.

The statement was made after comparing the two side by side, same streaming rate, same volume, same equipment. Only difference is the app used. perhaps something to do with how the two services interface with the dac. And yes I did make sure the dac was set to the proper streaming rate when using AM. I demonstrated to myself that the Qobuz app sounds better. I may be old but I can still hear.

Just because somebody’s hearing is diminished doesn’t mean they can’t delineate changes. It just means the entire base line is moved, and they will/can hear changes within that spectrum they can hear. I have severe tinnitus (sometimes to the point of not really enjoying the stereo at all) and am 57 but it doesn’t mean I can’t hear subtle changes as long as I’m paying attention.

I agree with everything you say. On a decent system there is a perceivable difference between lossy and lossless files. I’m 59 and I can hear that difference, but, perhaps due to my age, only through my main system in a dedicated listening room. I’m hopeless when it comes to distinguishing between Redbook and hi-res (24/96 or 24/192). Only yesterday I was listening to a piece streamed through Idagio, and after a couple of minutes I began to think that that there was a problem with the recording. The music sounded somewhat flat. Then I noticed that I hadn’t switched to lossless on the Idagio app; it was set to mp3 as I had used it on Carplay during my commute. Once I had set to it lossless, the recording improved noticeably.
I thought the post I responded to claimed that the SAME file (meaning: the same lossless file) sounded different when played through Apple Music and Qobuz.

The only possible reason, then, assuming that as you say, everything else is the same (loudness, bit rate, no DSP, …), the two services use a different master.
I have just compared the album Agitata with Delphine Galou played through Qobuz, Apple Music, and Amazon Music (all 24/96 as verified by my DAC). I cannot discern any differences. (Streamed through iPad connected via USB to DAC).
This is as it should be, because if it wasn’t that would mean that streaming services manipulate the sound somehow. It’s well known that many listeners respond well to some brightening of mid-range frequencies.

Even if my hearing hasn’t diminished my memory certainly has!

Perhaps your hearing was once better than you can recall now

With the two combined I’ll never make a subjective judgement!

With the latest iOS and macOS updates and features, I can Airplay2 from iOS to macOS.

macOS is connected to my RME ADI-2 DAC.

On macOS, in Audio MIDI if I (manually) change my DAC’s sample rate to 96kHz, interestingly, the 96kHz test file played from iOS to macOS also passes…

There is no cable between iOS and macOS. All over WiFi…

Anyone with an RME ADI-2 can verify.

Source is iPhone. macOS is the network endpoint in this test.

For background, in case anyone hasn’t followed latest updates: 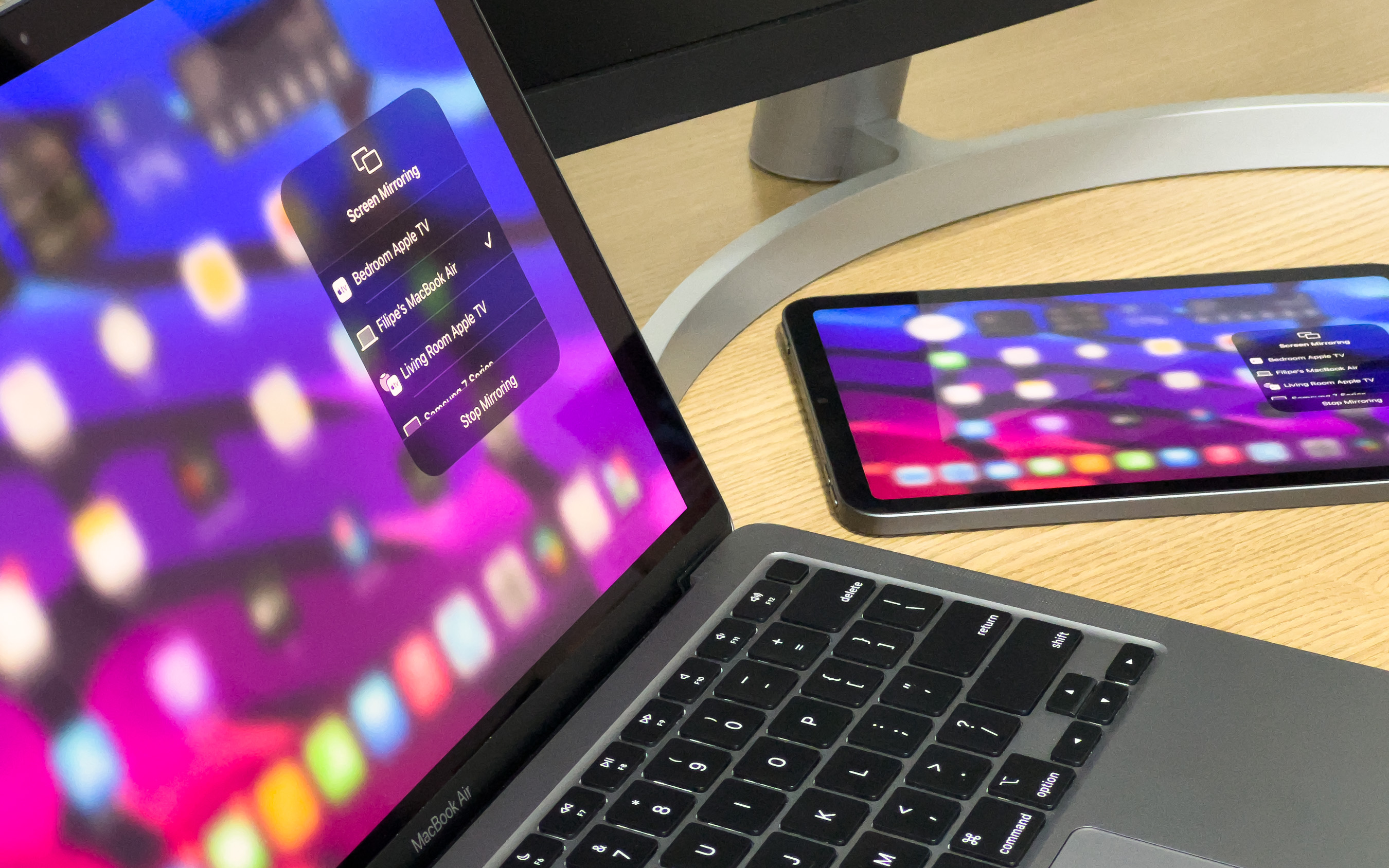 You can now AirPlay from iPhone or iPad to Mac with macOS Monterey, here's how

Read on as we detail how to AirPlay from an iPhone or iPad to a Mac without any third-party apps using macOS Monterey.