In my early days of using Roon, I often visited the Discover tab for inspiration about where to start building my queue for the evening. After a while, I started to notice the same fairly narrow set of entries in Discover. As an example, for some reason, Herb Ellis shows up all the time, even though he appears exclusively in a supporting role (never Primary Artist) on only 5 of 900 albums. There are other curious examples too, of course. Since the new Radio algorithm in 1.4 appears to be more random and far-reaching, can a similar improvement be applied to Discover?

Yes, please. The discover page is one of the most promising features of Roon but, alas, also one of the most disappointing. As Jim said, the same artists appearing over and over again. You guys can do better.

Another thing to consider is giving the user some way to indicate what is wanted out of discover. For instance:

Along the same lines, I’d be all for a “Surprise Me” button. Would be very cool to just be able to flip the system on and have Roon drive for a bit. Could be a very good way to discover some of those hidden gems in the library.

Since the new Radio algorithm in 1.4 appears to be more random and far-reaching, can a similar improvement be applied to Discover?

Yeah, I’m loving the new Radio, but is Play Genre still using the old algorithm? I spooled up Christmas tunes while decorating the tree, so I wasn’t paying that much attention, but it seemed more narrow and repetitive than the new Radio.

I’m not a big user of Discover. But I could see that changing if Discover was able to include Tidal Albums or Playlists not in my Library, but similar to music that I already had.

The other feature I would love to see is a pane or two in Discovery based on particular users inclusions in the “What are you playing now” thread, or perhaps favourited from LastFM.

Even a purely random selection would be better than the present version, with the same artists and albums appearing over and over again (cf. “Bach is stalking me”)

Bach Is Stalking Me Roon Software

For me, he’s on every Discover page at least once - often twice. Staring at me… with such stern… indifference. Perhaps judging my music collection and trying to (not so) subtly influence my choices. Look man, I want to listen to something like Zu’s Codor Todo, not “O Mensch, bewein’ dein; Sunde gross, choral prelude for organ” or the musical offering: [image]

Count me in, discovery needs the same love as the new radio and recommend from stuff not in your library if you have a tidal subscription.

not sure this is the right thread, but Discover is surfacing christmas/holiday recommendations. it’s the end of february, so seems like the algorithm ought to be smart enough to filter “holiday”, after say, 12th night. 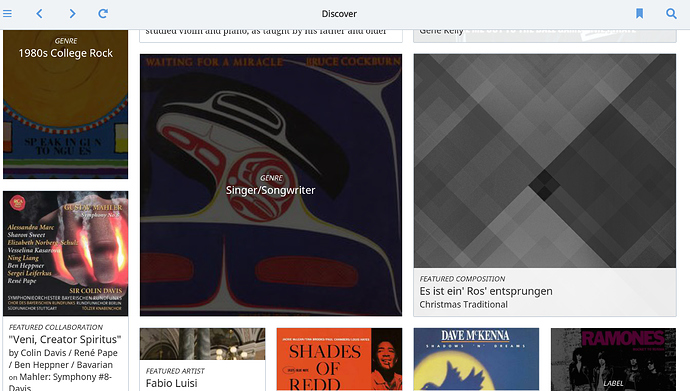 I didn’t notice this thread before. I agree, Discover is an amazing idea with great potential that feels entirely neglected - more of a placeholder rather than a fully fleshed function right now. I have occasionally looked at it but right now it feels mostly just like a random spinner - I could do the same by closing my eyes and scanning my Artists list with random mouse movements.

Using the Radio algorithm or something similar would be a good start. I would also like to see it done with reference to what I’ve been listening to lately, or if I set it otherwise, to dig deep in neglected corners of my collection. Or both, in separate feature areas .

My grand vision for Discover is that is would work a little like the old Yahoo! home-page; with various configurable functions and features that I could lay out like the front page of a newspaper (trying to remember what that was…).

So I could lay out and choose from various discover functions:

I’d love to have it really represent a targeted, user-specified music magazine.

Let’s give this thread a healthy bump. It is an old thread and newer versions has been rolled out since the last posts. Did some searching, but found nothing more recent in regards to Discover.

I am a fairly new Roon user and believe I joined while on 1.6. Can’t say I have ever felt the Discover feature doing what I expect it to do: Letting me discover the hidden gems of my collection. Instead it is repeating much of the same suggestions over and over, even if I have recently listened to the artist or even album very recently.

If there was one thing I’d love seeing added here, it is a better filter on last played. There are probably many more things you could tweak it’s performance with, but this is the most basic one for me which currently seems a bit out of tune.

During the trial for roon I got stoked for discover without having a chance to really dive into it. I am now disappointed. I thought it was going to be about actual DISCOVERING of music. Its not. Everything I clicked on was already stuff I had in some way or form listened to or heard. That was great and all but not exactly what I thought it was. More of a rediscovery really. This might be good for folks with huge locally ripped and stored music libraries that do not use a streaming service. I have tidal so that I can expose myself to more new music. Radio seems to be somewhat close to what I was thinking of. Needs work.

Discovery is about discovering your own collection. Keeping you in touch with stuff you have not played for a while or added to your library and not played. It’s never been about discovering new music. That’s down to Tidal, hyperlinks and Roon Radio.

Discovery is about discovering your own collection.

This is true, and I appreciate the theoretical value of such a feature. Sometimes a bit of inspiration is needed for “where to start” on a given evening. However, Discover seems to recommend the same ~10% of my library over and over again.

Perhaps with only ~15k tracks, my library is not sufficiently large for the algorithm Roon has implemented.

If you play them then it will start to change.

Great, while you’re at it how about doing something with ‘Focus on Similar’?

As it is now, it’s mostly useless.

As you can see they were working on a new discovery update back in 2017. I think there are some big updates that got held off for the Qobuz integration. Also believe remote core access has been in the works for longer than that. Would be pleasantly surprised if both of these rolled out in next update.