ARC is too verbose

Actually that is probably the “main artist” info as provided by the metadata provisioners, or your edits/tagging.
This is the remastered version of the same album from Qobuz: 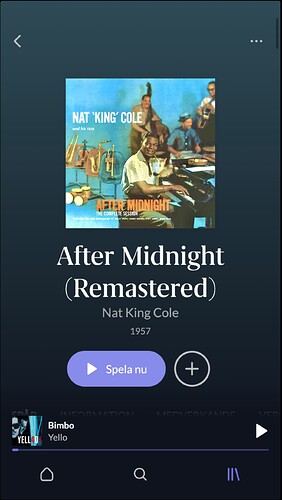 I just noticed another bug though, the typeface is different on the Album view, compared to Now playing: 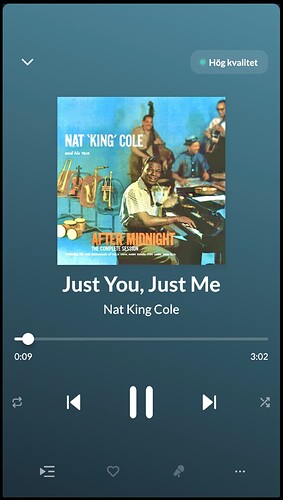 It’s 2 primary artists (Nat King Cole and the Nat King Cole Trio) and 2 composers (Klage and Greer). In the remote it looks like this:

By default if there is a Classical or a Jazz genre tag then roon will display composer credits. Probably because of font choices in the Arc GUI this design choice is contributing to an overly busy, cluttered screen.

Removing the genre to remove the clutter doesn’t make any sense. But you have some limited control how composers are displayed in settings: 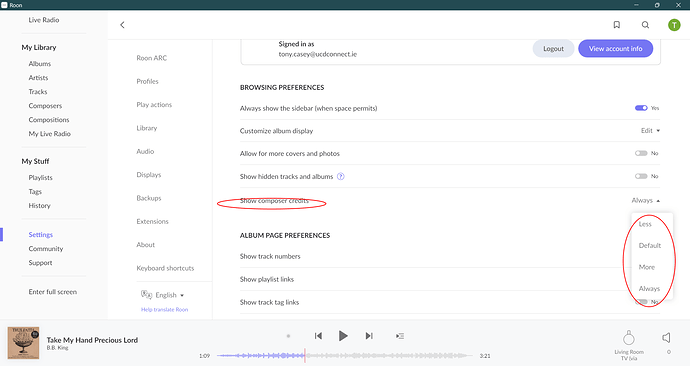 I have composers set to “always” because I prefer that on a lap-top. I can understand why some would prefer to be able to have that set as “never” on a small phone screen. I would also like that. But I don’t think you can set these display options on a screen-type by screen-type basis.

As far as duplication of the primary artist and the primary artist’s band is concerned. That has never really worked in roon giving very cluttered album screens unless you are prepared to edit one out according to your preferences.

The small phone interface of Arc is making these design flaws that were always there more obvious to more roon users I suspect.

I also have composers set to always in the Remote, and my above screenshot from the remote shows primary artists first and then the composers separately. That’s fine and not the issue. I just showed that screenshot to illustrate the album’s metadata.

To me that is he wants the option not to see the composers at all. But I suppose you could interpret that as he wants to see both the artists and the composers but separated on their own display line somehow. Perhaps the OP @Doug_Hannah? could clarify?

It can mean either, that he wants a setting to control the composer display similar to the remote (which I believe is not available in ARC) or that at least it should not lump primary artists and composers together.

IMHO it is always incorrect to lump them together like in the OP’s ARC screenshot. Even if ARC had a setting and composer “always” was enabled, it still should not display them like that in one lump.

And, as i don’t, i’d like to know which album you explicitly mean?

The album in the OP’s and my screenshot. Nat King Cole, After Midnight: The Complete Session.

I.e., not the “Remastered” version in your screenshot, that’s a different Version on Qobuz

That is not how I interpreted @Mikael_Ollars question either. I interpreted that as provide some examples where artists and composers are separated.

Yeah sure. But the point is that in the precise version that the OP and I showed in the screenshots, the display is as shown, and it’s bad.

You don’t seem to be really addressing the point? There are any number of reasons why different versions have different tags. I see that all the time.

Can you screenshot some contrary examples to the OP where there are both artist and composer tags that are separated in Arc? It’s an interesting general observation that in Arc they are not separated but it’s not entirely clear that your point is on topic which was the issue you had with me.

I suggest we wait for the OP to respond.

We seem to be misunderstanding each other. It’s precisely my point that different versions may have different metadata, which may then display differently. Like the “Remastered” version of the Nat King Cole album obviously has different metadata, and therefore it is not a surprise when the display is not the same.

I am not saying that there are occasions in ARC where it shows them in two separate fields. What I am trying to say is that I have other albums where Primary Artist and Composer is populated in the credits, but the Now Playing screen only shows the Primary Artist and NOT the Composer. E.g.:

The metadata in this album is edited by me because it was the one I had at the top of my list, so don’t be surprised if you don’t have the same. Nevertheless, as you can see, the track has a composer but Now Playing shows only the primary artist

Ok. Now you are now describing something else which is strictly off topic as the OP’s problem is Arc. But just to close this off. I never see what you are describing on a lap-top. Only Classical and Jazz will by default display composers. If you want to see composers then you need to go to settings and set the composer visibility to “more” or “always”. On a lap-top your example will display both artist and composer credits if the composer display is set to “always”: 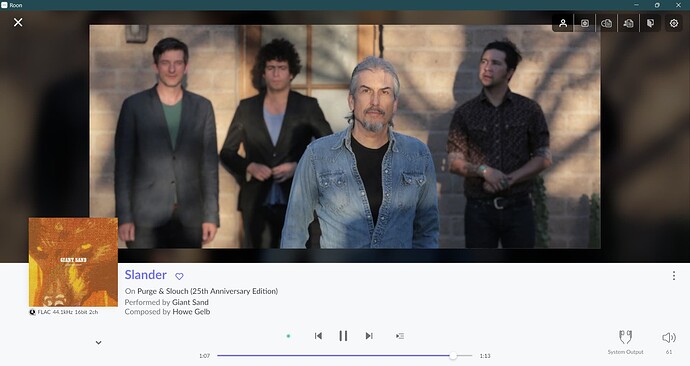 I never use a phone with roon but I seem to remember that there are several change requests asking for composer display and other display features on a phone. I don’t use Arc because I don’t have a use case and it conflicts with another application I do need. It is possible that Arc doesn’t work the same way as a lap-top either so maybe another change request is needed to split the display of artists and composers.

It doesn’t sound as if there is a solution for the OP whatever he meant. Just a can of worms.

. Now you are now describing something else which is strictly off topic as the OP’s problem is Arc

I don’t know what you are saying. I am talking about ARC all the time. And my screenshots of the Giant Sand album are from ARC.

The OP clearly described the problem:

There are two things to take from this:

(Plus, we don’t know why it shows like this for the version of the Cole album in the OP, but not in, e.g., the Giant Sand album)

It is not at all obvious to me that you are talking about Arc all the time when the issue is that roon appears to have different behaviours depending on what you are using to interface to roon. That is, various combinations of a phone / laptop / 2.0 and Arc. I haven’t tried a tablet.

I have got Arc up and running temporarily and I can confirm that with the Giant Sands example on both a 2.0 and Arc phone that the composer is not displayed even if the composer visibility is set to “always”. However with a lap-top the composer does display. I believe this is a known issue with several change requests. It would appear that 2.0 display issues on a phone have been carried over to Arc. As I understand that Arc is a mobile re-write there may well be other display issues created as the OP has highlighted. It doesn’t look as if there is a satisfactory solution for any interpretation of the OP’s issues.

Well I mentioned ARC and its behavior in every single post, except the one at the start where I clearly wrote that this screenshot was from the remote, and I explained why I was showing that one, specifically to make clear the difference and what the issue with ARC is

Clear enough to yourself then.

I did my best

Yes. There is probably not much can be done for the OP except a feature request or wait for a future release. But let’s wait for the OP’s input otherwise this thread is already too verbose