It it possible to override this mistake in Roon’s metadata or do I have to wait for them to fix this?

Mistakes like this are not unexpected but they are really annoying.

Can you not go into Album Editor and change the name of the artist?

What menu is the Album Editor hiding under?

This thread raises a question. Will metadata mysteries and errors submitted here be changed?

In 2017, there was a spate of metadata errors reported followed by an similar number of “fixed” responses. Lately, no such confirmation is being sent. And, in a few posts, the suggestion given (don’t recall by whom) was to report it to Rovi/Tivo.

So, I don’t know if Roon is doing anything with these reports. And if not, I guess we’re left with DIY.

Sorry that you have a problem here. However, we don’t actually seem to have a Bill Hulley in our metadata database; though we do have stub album-level metadata from TiVo for the album by Bill Hullett:

Is your album identified? It’s possible that this misspelling is coming from your file tags.

The All Music entry looks fine. My tags also look fine. I just checked them with Tag Editor. How do I check if my album is “identified”?

Where is ‘Focus on Similar’ hiding?
The only places in the UI I can find three vertical dots gives a menu with 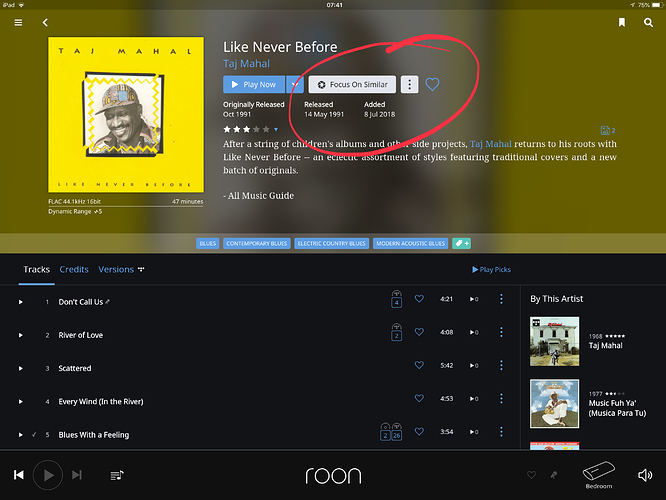 We ought to find out why this is wrong before ploughing into editing.

@JOHN_WILLS If your album is not identified, there will be a blue Unidentified link as per this picture.

Finally, is that ARTIST tag the track artist or album artist? If the former, what is the value of your ALBUMARTIST tag (it may not be labelled as such).

I’m running Roon Remote on my Android smart phone. The UI is different than your screen capture. I don’t have the Focus On Similar option. I do have a menu with 3 vertical dots but it only has the 4 choices I listed.

I edited the tag and Roon picked up the change. All is well.

You won’t get the best from Roon with a smartphone… a tablet is much better. Glad your sorted though…

I’m traveling on business. I was running Roon entirely on my MacBook but I ran into a bug so I switched to Roon Server on the MacBook and Roon Remote on the phone to avoid the bug. When I get home in a few months I will switch to the tablet. I didn’t bring the tablet with me this trip.

3 posts were split to a new topic: Composer name misspelled