Odd behavior here. On the Bill Evans artists page “Top Track” and “Albums” are missing. It jumps straight to “Appearances”.

When I search on the individual albums they are in Roon, for example “Waltz for Debby”. And the albume has Bill Evans listed as an artist twice, “Bill Evans / Bill Evans”. And those linked pages have the same issue. Albms not listed. 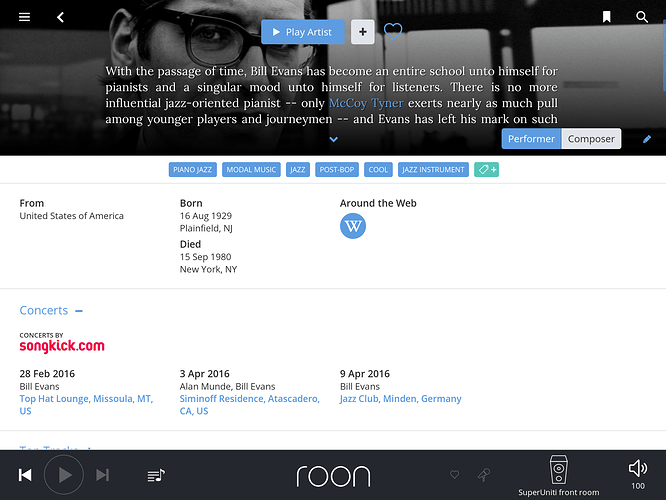 It will be great to catch him in concert again for those of us too young to see him play live when he was alive the first time.

Bill Evans, the pianist, is mixed up with a Bill Evans, saxophonist. This results in only 4 tidal albums shown in Roon viewing the artist page!! 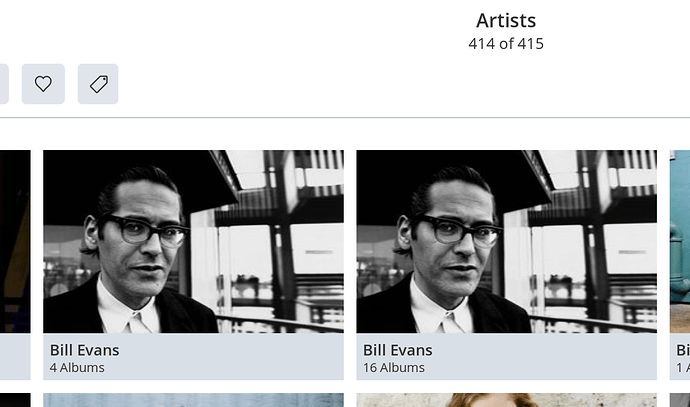 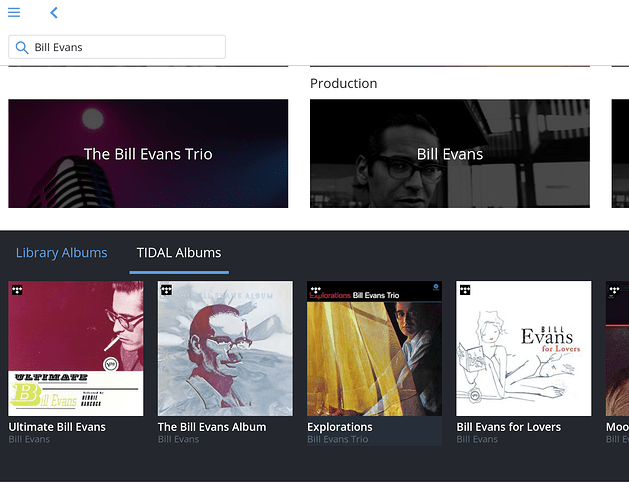 I already cleared the tidal cache but this didn’t help…

So how can I get all the correct Tidal Bill Evans albums in the artist overview page?

This is disconcerting. Roon’s core feature is presenting music we own to us in a user friendly interface. Major problems like this should not happen with major artists for no apparent reason.

Thanks guys, we’ll fix this.

this issue is still there… when will it be fixed?

One presumes that an updated version would have to be downloaded and installed to make any changes - have you had one in the last 5 days?

There should be no app update necessary for metadata. Roon’s database should be updated several times per week and these updates pushed to your library automatically. No update of the app was needed to mess it up in the first place. It just happened for no appararent reason about 5 days ago and the last update was about 3 weeks ago already

This is now fixed for me. Thanks, Roon.

it’s not for me…
I still get the results from Bill Evans the saxophonist, who’s on tour it seems

. Still only the same 4 (wrong) Tidal albums showing on the artist page. The only way to get to the the other Bill Evans albums on Tidal is by using search.

@fritzg are you seeing the same? The screenshots are a few post above
thanks

That is the problem I had. It is gone now and back to normal. though “Bill Evans” is mentioned twice as the artist (both links go to the correct artist page).

We fixed some Bill Evans related metadata issues in the last week. It can take up to 2 weeks for those changes to filter down to your library, but let me know if you’re not seeing any change here in that time frame ok?

Hmmm. It was fixed me 9 days ago. See above. And now I have the problem again. Very odd.

Now it is back to normal. Very odd behavior.

All will bring me to these 4 albums only…

I own 8 plus a few more tidal albums I faved yet these are not on the artist page. Luckily all do show up under “albums”.

My Roon albums are correct, but the TIDAL albums are not. They are by the wrong Bill Evans. This is all very odd.

This continues to be a problem. The Bill Evans entry is a complete mess. The problem seems to change every few days. @mike @vova