Will we ever get a decent display of the picture of an artist? 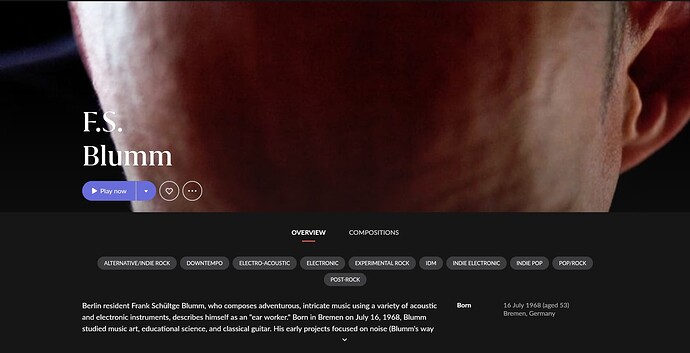 Funny, this is my artist page for F.S. Blumm… 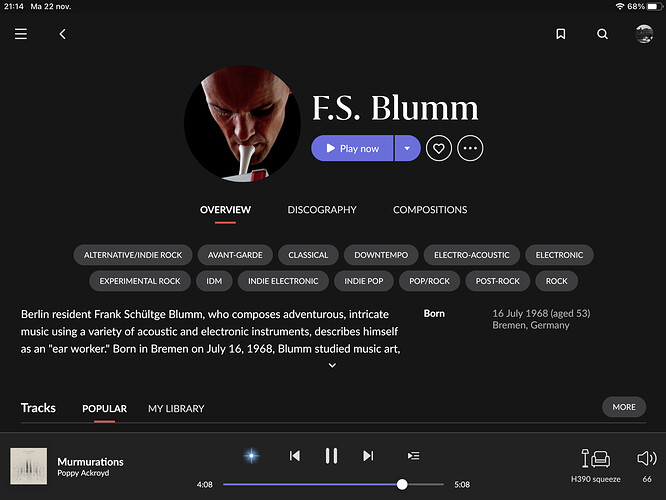 Strange that you’re getting the banner photo instead of the circle one. What version of the Roon client is this from? Is this desktop or tablet?

David, if click on any of his albums and then on his name, you will get the banner too.

This is what I get.

Then, if I go into an album and then click his name, I get the banner.

It’s a mixed bag.
Some albums when you click his name take you too a banner and some take you to the small circle avatar.

…it’s not peculiar of this artist.
in general, i guess depending on the picture size, you can get circle, banner, or a continuous switch between circle and random.
for example:

the problem, here, is that tha banner view is … unbearable in 90% of the pictures…

I noticed a few artists didn’t even have a picture,all it showed was there initials

At the risk of telling you something you may already know, you can add your own images to the artists. Search the internet for an appropriate picture, download it to your PC. I use a freeware program called Irfanview to edit the image by either altering the resolution to something like 1200 x 700 and/or cropping the image to get the perspective I want. Then in Roon under Artist > Edit, you can select Add Image. Select Browse for Image and select the file you just created and bingo you have a great looking banner image for your new artist.

Yes, i know it.
And i do it, too.
But… with the last UI interface, the picture is a very large stripe, and i find very difficult to adapt the pictures.
Besides, i used to do it already with older roon versions, where the aspect ratio was different… with the result that most of the custom pictures now look orrible.

i think that the new UI solution simply does not work: it’s not a custom pictures problem, most of the roon pictures does not sustain the large aspect ratio…
and such an extreme ratio simply cannot work both on a PC monitor and (say…) a smartphone controller.

and i’m not going to change THOUSANDS of pictures to correct a bad UI… that maybe (hopefully) will change in the future.
i actually now add custom pictures when they are totally missing, or are of awful quality…

I tend to agree with you. However, there’s a Roon initiative in Beta right now that is using their so-called Valence to correct artist images. I’ve spent some time correcting a few of the images. They’re trying to provide images that work for the desktop/tablet apps as well as phone apps. I don’t know how well this is going to turn out, but I know they’re working on it.

Totaly agree,the 1.8 update is a disaster,broke more than it fixed