Artists and albums acting up

Why is Amos Lee here? And why isn’t the Norah jones album Little broken hearts? 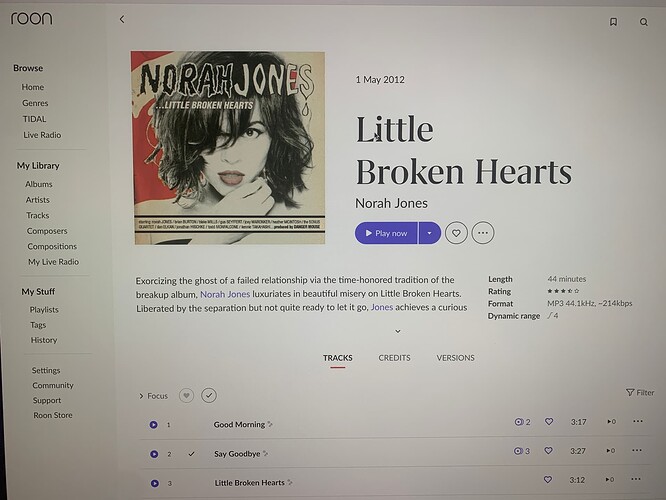 On Focus I see the Joni Mitchell 75 Birthday as well and 2 Anoushka Shankar (her sister) albums, Even a Keith Richards Album where she is credited - Crosseyed Heart 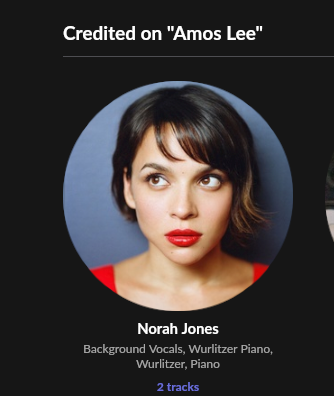 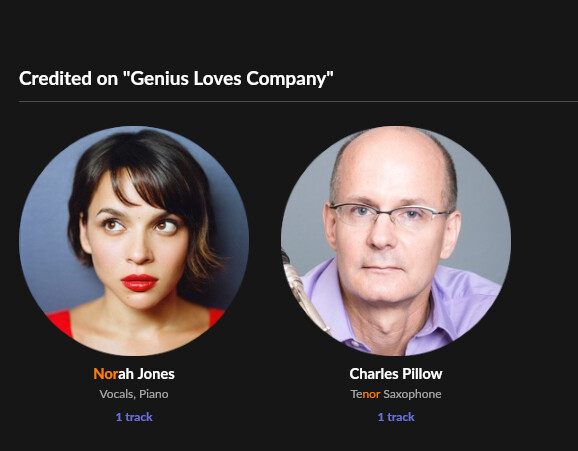 Little Broken Hearts shows for me , maybe check the credits are correct

Thanks for the feedback
I got these results by clicking the artist and then albums in my library. I’ve always done that. No focus or anything else. Just two clicks. And I’m using this as an example. MANY other of my artists are acting up as well. Maybe some settings have changed? Has Roon changed?

As an edit, Norah Jones is the primary artist on little broken hearts. That should be enough to show up under artist in my library.

The blue oval with “Norah Jones +” only comes from focus as far as I know.

I am using a Win 10 and iOS remote app, maybe it’s a Mac OS thingy

I’m fascinated Please post the series of clicks/taps to achieve this image ? I can’t reproduce it without Focus

I’m on an iMac as my support ticket says. Not on a remote.
In artist I select Norah jones. Then I select albums in my library. Same way I’ve done it for years.

I am on Windows 11 and I cannot reproduce your screensshot without “focus” either.

Regardless, roon lets you navigate your artists by focus, funnel, search, browse and probably a few others besides. It returns different results in every case. No doubt there are rules and reasons. Maybe someone knows them? 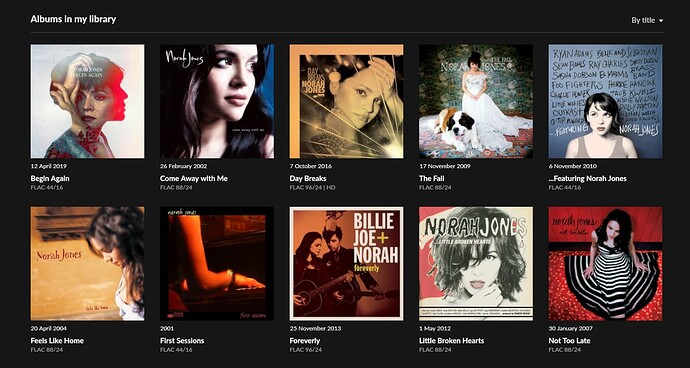 V.20
Let’s get over the fact that yours doesn’t look like mine. That’s not my question.

The explanation is above. Somehow you have “Focused” hence including Credits . The album view now shows where Nora Jones is credited. The albums you comment on fit that criteria.

Filter does just that showing a match on “Nora Jones”

Solution ?? If not I can be of no further help

I do appreciate your help. It’s frustrating. How do I turn off focus? I’ve always used artist>view albums in my library.
That returns what my photos show above. Why amos lee? And why not little broken hearts?

Focus is a tool , you must select it . That is why I am confused how you are getting into Focus without selecting it.

Selecting an artist “picture” from Artists in the main menu should give you a Overview/Discography of the artist . It seems you are not getting that. In Discography you will see all her albums , all her collaborations on albums not strictly Nora Jones etc . Depending on what Tidal/Qobuz/ or Local Has.

The original view you posted is by using Focus hence as per the first reply it includes anywhere Nora Jones has a Credit even Keith Richards !!

Its how you are invoking Focus is a mystery hence my question about versions and what keystrokes you used to get where you were.

Roon should present the same interface on all platforms (except certain phones that are toosmall to show) . So using a MacOS or windows ought to respond the same , WHY is the question .

I suspect something local . If you post the Keystrokes I will try and replicate it on Windows 10 and iOS , maybe @tripleCrotchet can try on Windows 11 . At least we can find out what is causing it to help Roon support

not showing up under artists

For some reason you are on the My Albums view when you are trying to find an Artist (by focus). Nothing wrong per se, but it relies on your albums being identified correctly and/or properly tagged if not. 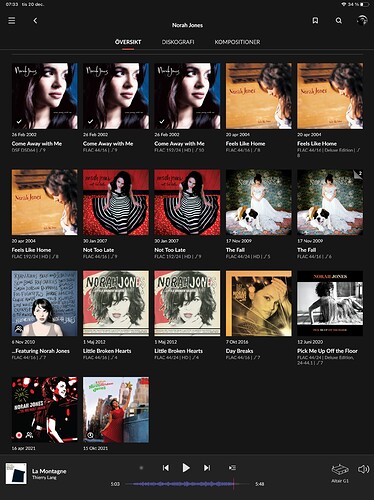 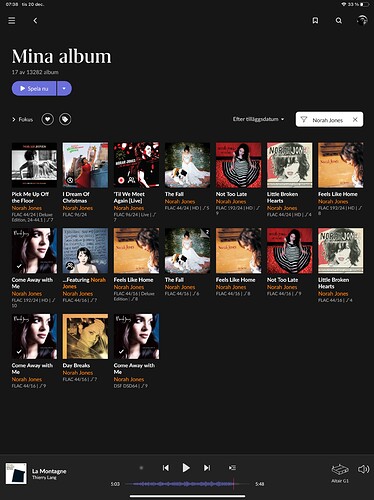 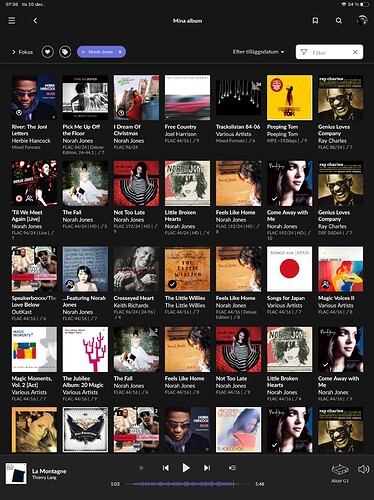 But @Daniel_l says he is NOT using Focus , that has been the debate , I can’t replicate the Blue rounded button without using Focus , so my guess is he is inadvertently using Focus but how we have yet to bottom 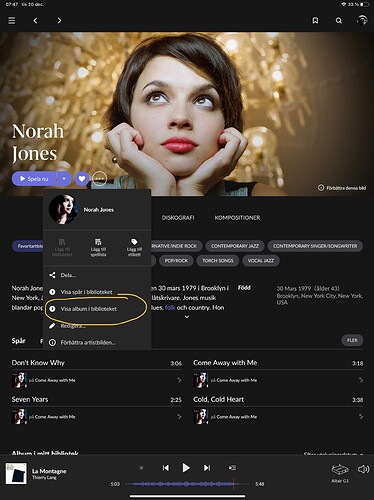 I have obviously never used it if not , but that is still Focus at that level I guess

I use Discography and the Library Icon

I have obviously never used it if not , but that is still Focus at that level I guess

No, been there as long as i can remember (doesn’t say much to be honest

And yes, your approach is yet another way of presenting her Jones’s albums: 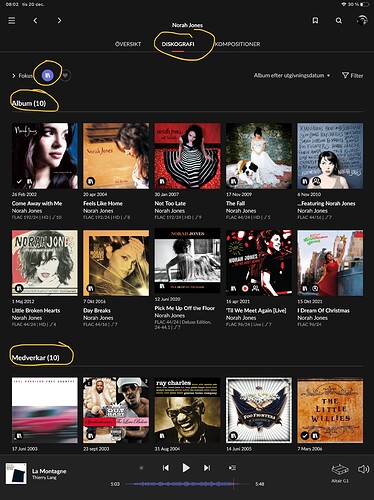 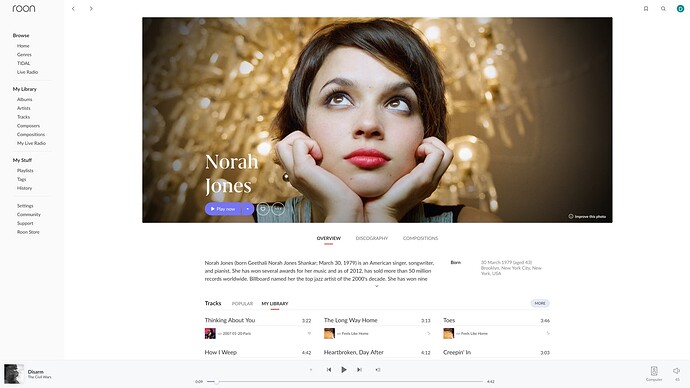 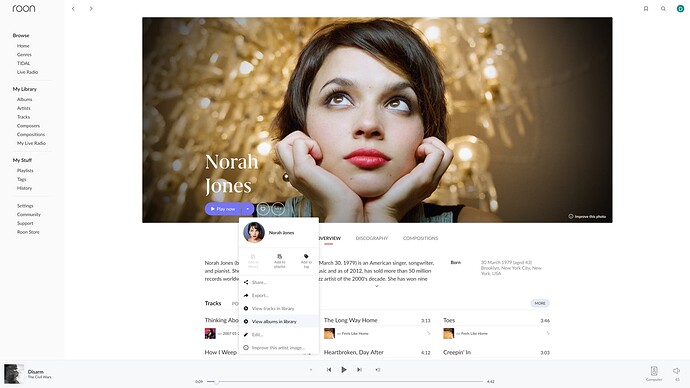 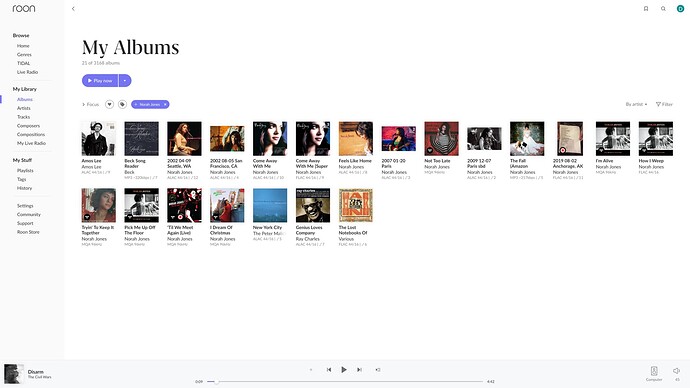 Three clicks. Dont know why Focus is coming up.

The the second part of the question is why doesnt this album show up? 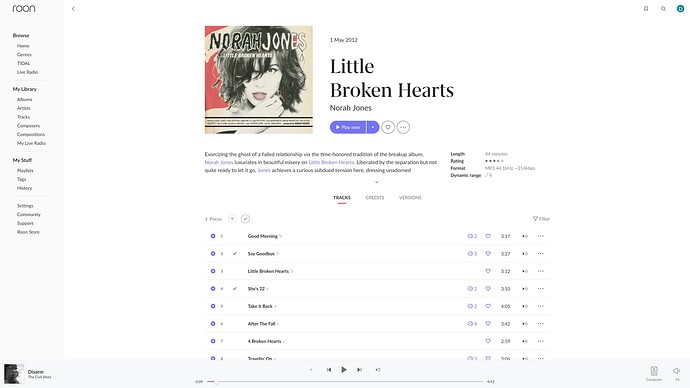 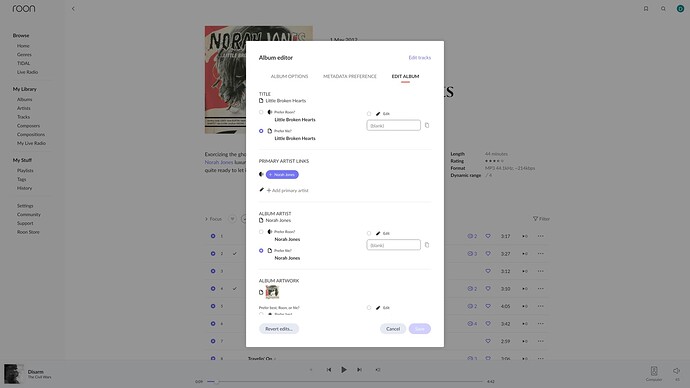 I hope this clarifies things.Thanks again for all your help. Im very confused at this behavior.
Thanks
Dan

Three clicks. Dont know why Focus is coming up.

The answer is given by your screen shots, going from the “context menu” (for an Artist) to “Show albums for artist” takes you to the Album view, with a Focus on the said album artist.

The the second part of the question is why doesnt this album show up?

I see you have made edits (or set prefs for various parts of the metadata). This makes it a bit complicated to find deviations. But, the album seems Identified? Don’t remember if you need to expand the review to see status, but a nice, quick view is selecting Versions for the Album. That usually gives a hint to it’s location and general health.

Edit: Oh, i see now! You have “messed” with Album Artist in the album edit dialogue, set to “Roon” and Little Broken Hearts WILL be listed under Norah Jones’s Album list.

Three clicks. Dont know why Focus is coming up

Because the way you are accessing it IS by setting a FOCUS on the album screen. Notice the blue focus bubble circled in the Album Screen shot.

You should try going straight to the Albums screen and type norah jones in the filter option (or hit the / key and start typing). See if you get the results you want instead.

Edit: Oh, i see now! You have “messed” with Album Artist in the album edit dialogue, set to “Roon” and Little Broken Hearts WILL be listed under Norah Jones’s Album list.

Thanks for the suggestion. I do use Album Artist in all my metadata. Maybe I thought of it wrong but by using Album Artist it would list that Artist under Albums.
I did switch to prefer roon as you suggested but it still not showing up under albums from norah jones. Others have said I may need to delete this album completely and re add it.