there’s something i do not understand.
if in the artists page i focus on genre / classical i get something like this:

image.jpg1874×812 564 KB
in the middle of true classical artists, there are in general A LOT of non classical ones.
for example, shirley bassey. she is not classical.
and if i go in S.B. page: 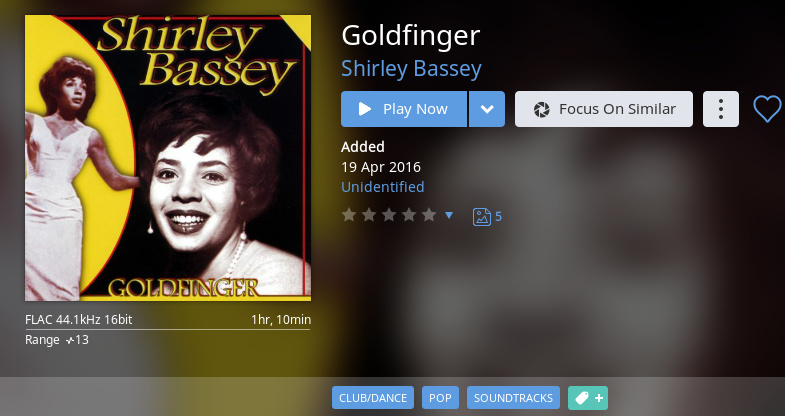 this same pattern applies everywhere. except that some artists are actually credited as “classical”. in that case, if you manually remove the classical genre, the artist could or could not be removed by the focus page, but i could not understand the logic.
anyone at the @support can give me some hint?

If you go into Edit for Shirley Bassey, there is a flag for classical. What does it show?

Film Score is a sub-genre of Classical.

and the same for suzie ibarra

do you mean this?

No. It’s the sub-genre on the artist, not on the albums.

@joel, i don’t understand
in the genres page, i can see stage & screen as a top level genre: 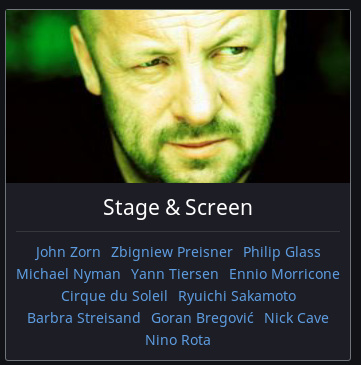 it’s not a classical subgenre: that would be meaningless… soundrack is hardly a genre, but even if you consider it a genre, it should be something transverse to all genres… jazz soundtracks, rock soundtracks, classical soundtracks and so on…

in shirley bassey case… if i remove FILM SCORE, she is removed from from classical. even though between her genres there are still SOUNDTRACKS and STAGE&SCREEN. so?

besides…i’ve made other discoveries. many pianists are credited with a genre KEYBOARD. which is a classical subgenre. so that… most jazz pianists of my library are now classical artists… 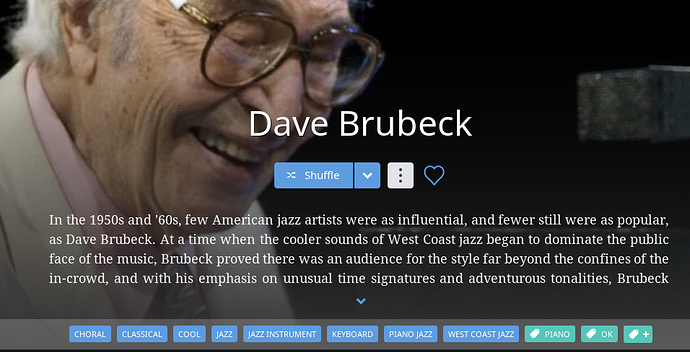 Another Classical sub-genre that doesn’t make any intuitive sense is “Vocal Music”, so it seems to be routinely misapplied to both Classical and Pop/Jazz. Confusingly “Vocal Music” is non-Choral but “Vocal” is American Songbook.

I have tried rationalising my genres, for example, deleting keyboard and replacing with “Piano Jazz” for jazz artists and also generally mapping my genres to roon genres. The motivation is improved radio as it is pretty obvious there are all sorts of cross genre leakages with the current schema. But I didn’t notice any difference.

in the genres page, i can see stage & screen as a top level genre

Indeed it is. The problem here is that, fundamentally, hierarchical genre models do break down. There are enough “classical” film scores to warrant them being in a classical sub-genre; many would fit in both Classical and Stage and Screen. And yes, sometimes the wrong genre is applied.

We currently use genres from TiVo. You can see the sub-genres of the Classical and Stage and Screen top-level genres on these pages:

yes… just found out.
actually, i’m not a genre maniac… and not at all a roon radio user. so, i did not really care about genres.

but now, after the WORK turn around we have talked (tracks with no composition… and it works!) i’m going through a massive tagging job. adding the WORK tag in all non-classical music.
and, doing the work, i was also checking the classical library status. that’s why i have seen this problem, that i actually had already noticed but did not care…

i’ve posted somewhere else about roon genres.
and i really find really bad that in roon knowledge base there’s no explanation at all of roon genres, their hierarchy, their logic, and how it interacts with file tags.
in my library, summing up fake FILM SCOREs, fake VOCAL MUSIC, fake KEYBOARD, it turned out that half of the artists were classical…