What is going on with the latest update? I used to just drag a jpg into the folder and it would scrap within moments and bang the artwork would appear on my streamer. Now I have to dig through the software to assign an image.

Also search is broken. I’m staring at the files right there in my explorer and yet it’s not in my library (when it used to be) and search brings up nothing. The tags are right.

Anyone else dealing with busted software?

How is you artwork settings setup ? (in Settings>Library>Import Settings

Have you got “Prefer Best” set

If your imported image is lower res than what Roon has imported from its metadata it will leave it out ?

Worth a test ? Generally I have not noticed this as an issue in 1.8.

Hey, Thanks for the reply. Unfortunately, “prefer best” is selected so that’s not it but I appreciate the help.

But if your image is lower res than Roon it will prefer its own and leave yours ?

It’s blank, not displaying anything.

I have a massive amount of bootlegs, Roon doesn’t have images for these albums at all and it’s a massive project to populate photos that are missing from the directories. Recognizes the Artists sure enough, it would be nice if it pulled random band photos in cases where there is no album cover art. As it is now, I have to dig into the individual album setting to point it towards a file i dropped in the directory. It used to just scrape the directory and use any old jpg in there.

Roon simply “asks” its metadata supplier it doesn’t have sources of its own just 3rg party ones.

The AllMusic etc sources tend not to deal in Bootlegs , just “normal” releases

So, if I understand, in versions 1.7 and earlier, Roon would display any old jpg in an album’s folder without fuss or bother. Now with V1.8, that has stopped.

How would Roon behave if there were several jpg’s in one folder? And where were these random jpgs being displayed? On Roon’s album pages?

I think the problem is that you are dealing with bootlegs. As @Mike_O_Neill said, Roon will not know how to find the correct jpg for the correct band.

As for searches, you might give a couple of examples; pictures help too.

Its long been established with most any other music software that a jpg named folder.jpg in the album folder should be picked up and used for the cover, if roon is not doing this even when you prefer your own, then thats just roon being crap, no way to justify it.

Roon would display any old jpg in an album’s folder without fuss or bother. Now with V1.8, that has stopped.

not the case, still working as it always has, subject to the preferences you listed earlier. I have quite a few Unidentified albums and they all display ‘folder.jpg’ as they should.
Note that when you select ‘Prefer Best’ things can get unpredictable, with which jpg Roon considers to be ‘Best’ and if Roon updates the artwork during a metadata update.

In the past I have found the ‘Metadata Preferences’ to be rather sticky, needing a restart of the Core or a fresh import of an album (Clean the database before import) to take effect.

Roon is supplying band picture and bio for my bootlegs. It knows who the Grateful Dead are.

Miraculously the picture feature is back to working for me. Perhaps restarting software and computer a few times over the last day fixed this.

However search is still not finding albums that are tagged quite properly. I even discovered a case where tracks from an album, with track numbers included are completely ignored.

This is highly frustrating for something that worked flawlessly since I subscribed months ago. 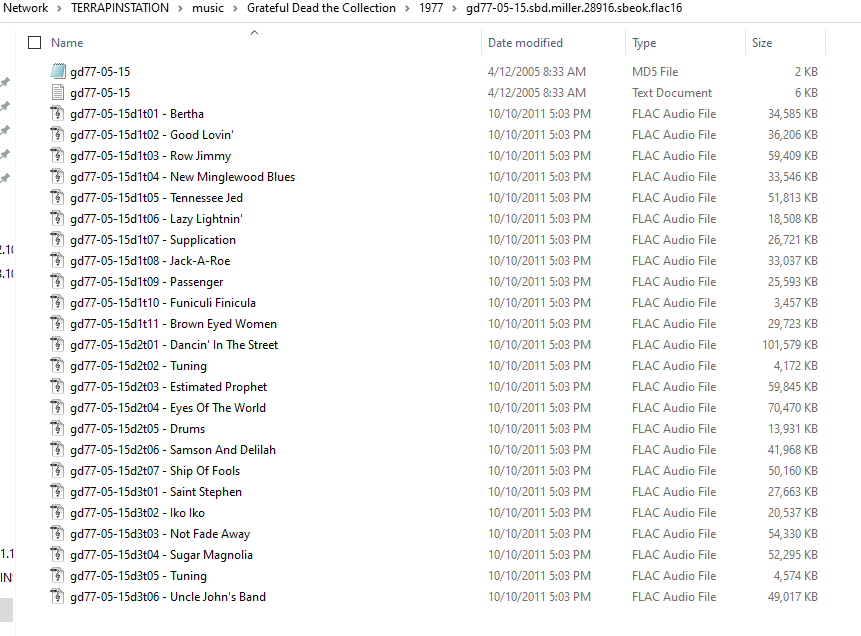 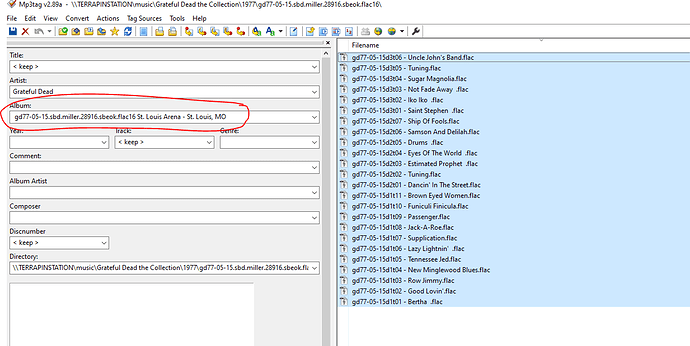 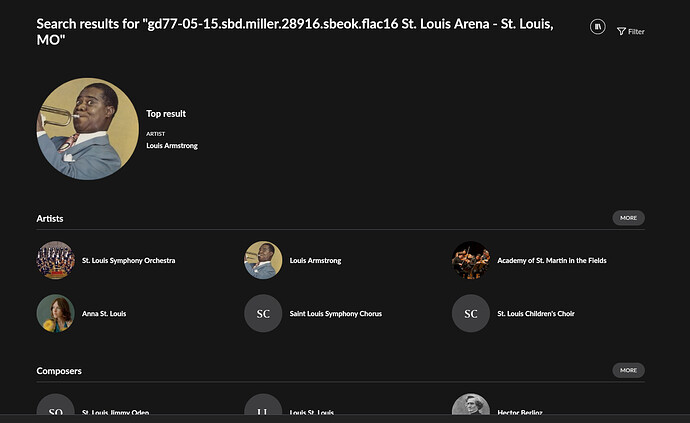 There is certainly an issue with Roon search whereby an exact match to your search string can be completely ignored in favour of something else it thinks is a closer match. This issue has been raised before along with the somewhat pedantic nature of Roon search, which is exactly the opposite behaviour.

There is something else going on here because it doesn’t show in my library either. If i do partial searched "gd77-05 or the like) it doesn’t pull it either. I could nuke the thing and see if it gets it in a new scan but audio profiling my 10TB music catalog takes days. I wish there was a feature where I could manually rub Roon’s nose into a directory like a dog’s nose in S#@$*

It’s not like I can just click from the file to play the show as a one off either. I’ve been on board with Roon until this snafu, I’m rethinking this because it’s a massive hole unless I can figure it out.

Closest to this would be using the filters in Track View. You can filter by folder Path.

I was maybe thinking a little more obscure

even I have heard of the Grateful Dead