Assignment of "live" attribute to tracks

I just added a “live” album to my library and am confused about how the tracks are given the “live” attribute by Roon.

I have not set any metadata to indicate (or not) if the album or tracks are live. The discussion is about Roon’s determination.

You can see that Roon has determined the album is live. Great. However, only one track (3) is flagged as live. Why aren’t the rest? Doesn’t a live album infer that all the tracks are live? You could certainly have a “live” album with some studio tracks, but I’d just think that the default would be they’re all live.

Since I haven’t set any metadata in regards to liveness, is this another example of Roon getting lousy metadata from its providers? 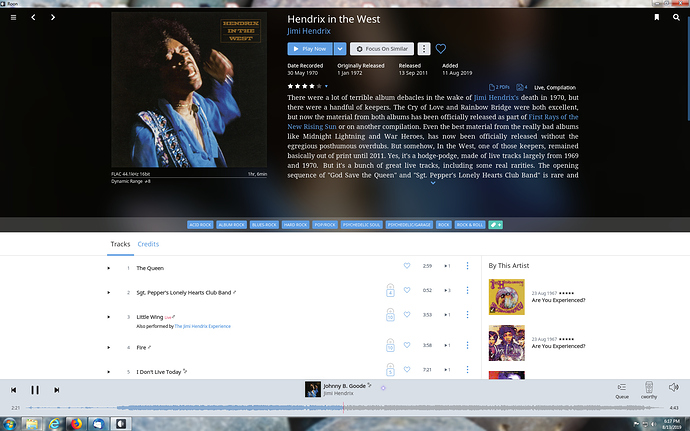 It looks like this is bad data coming from one of our metadata providers. We are going to look into this and reach out to them.

Just another example of Roon being a slave to metadata instead of a master of metadata. Sad, very sad but not as sad as us paying for this metadata bondage.

Well, right now the alternative is to do without Tivo/ROVI. My vote is to keep them.

What about some scenario where Roon sets all the tracks to “live” if the album is live? I realize you don’t want to override in some cases, but I’m thinking that if I have an undentified album, and I tell Roon the album is live, that I don’t also have to go and tell it each track is also live.

You can select multiple tracks in Roon and set them all “Live” in one edit operation - you don’t have to edit each track individually.

Selecting all the tracks in an album can be as simple as selecting the first, then choosing “Select All” from the “1 selected” drop down menu at the top left of the screen.

Perhaps if all tracks are marked as “Live”, then Roon should also automatically mark the album as “Live” - that sounds like a Feature Request to me. At the moment, having set tracks to “Live”, you also need to do a separate edit operation on the Album, to set it to “Live” also.

Everyone is a slave to metadata one way or another. Please explain how Roon could become masters of metadata without it requiring the Roon service to change its pricing.

For starters Roon Labs could apply some of its research into artificial intelligence that they have using for their precious and much promoted Roon Radio feature into improving metadata. And that’s just the tip of the iceberg.

Besides I am paying Roon Labs to do figure it out, Roon Labs is NOT paying me.

A few metadata sources that I am not sure are presently being used by Roon:

@dylan, just fyi, the album I listed here isn’t at all unique. I was going through some of my live albums to see where else I could augment performance metadata and at least half of them were like this with the tracks not set to “live”

I get that and many of mine are categorized as multi artist compositions and so roon then shuffles within that mislabeled file.
Happens when i try and shuffle my whole library…invariably the shuffle process gets stuck on one album…but yes all my stuff is live and never categorized that way

I’m not asking Roon to the fix the metadata providers errors, I’m asking Roon to fix MY metadata and to not add errors to my metadata, as I outlined in this post:
ERROR DOES NOT COMPUTE!