Audible ticks and pops during playback

I’ve been hearing random ticks and pops consistently materialize over the course of a few years. The fix is either: disconnect/reconnect USB cable from DAC or go into Roon audio settings > Device setup (gears icon) > show advanced settings > toggle Use Max Buffer Size on or off, depending on which state it’s in. Enabling this setting doesn’t fix the issue. Toggling it on/off breaks the connection which then temporarily alleviates the noise when I start playing music again.

The constants that have remained in the system have been the DAC and the powerline filters. The other components have been introduced later, including Roon versions and Mac OS updates. Still the ticks and pops remain. It seems to be a USB issue since disconnecting/reconnecting the USB cable temporary fixes it. But the ticks/pops ALWAYS come back – regardless of streaming Tidal or playing local files via NAS.

I’ve read a couple posts on this subject but any solution doesn’t see pertinent to my setup/equipment. The fact that this happens to others, however, suggests it has something to do with Roon, and/or compatibility with my DAC, which uses an ESS Sabre 9028 chip. Any help is appreciated.

Does this issue occur with all endpoints, or just the chain described above? If you play to System Output of the Core machine are there similar ticks and pops?

Hey @dylan, I’ve never tried anything but the chain I described, since that’s the only thing that I listen through. I suppose I could try to see if it does it using the Mac as the output device. If I’m lucky, when it starts happening I’ll switch over to the Mac, but that might effectively break the connection and stop it from happening. I can try to check.

I should say that it takes a bit for the ticks to start happening once I’ve stopped them (sometimes 30 min or more? Seems like it, I’ve never timed them.) So it isn’t all the time (thank God) but it is consistent. Happens every time I listen.

2011 MacMini is not going to be giving you the best speed for roon, and wifi and power line networking also won’t be doing you any favours.

As Roon’s capabilities expand this is going to leave lesser spec’d cores struggling to keep up.

Perhaps you can screen shot some playback settings for that zone and signal path shots while you are hearing these clicks and pops.

Higher bitrates are going to be likely to cause this than lower redbook rates.

Definitely let us know if you see the same behavior in that configuration. Knowing whether or not this behavior occurs only with this endpoint or for all endpoints is definitely a great data point for better understanding where this behavior is stemming from.

As wizardofoz suggested above, screenshots of Device Setup as well as a screenshot of the signal path when this is occurring would also be great data to have here.

Thanks. I’ve listened to the Mac itself to see but so far no ticks. Let’s assume it only happens when going through my DAC. Are there things I can try to get rid of the issue?

Attached are screenshots of the signal path and device setup 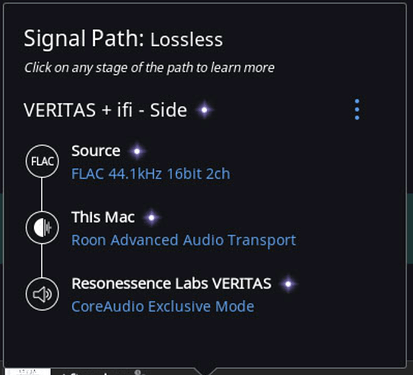 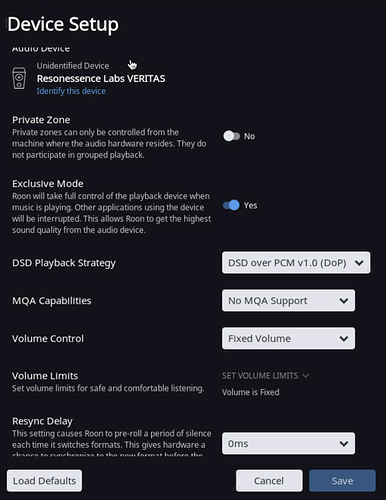 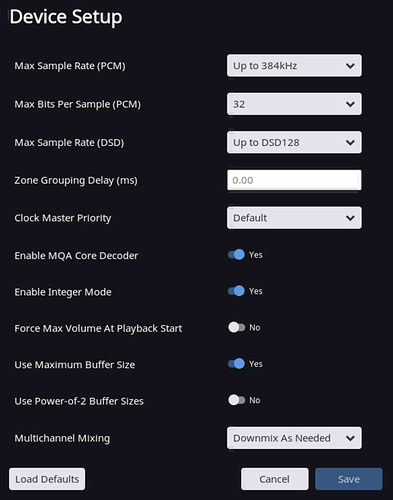