"Audio Device in Use" message

Network Details (Including networking gear model/manufacturer and if on WiFi/Ethernet)
Roon Server streams to Devialet amp via Ethernet (both connected to a DLink switch).

Description Of Issue
I would like to report an issue with Roon server (running on Antipodes DX music server) streaming to Devialet D400 amps via Ethernet. The issue I have found is every 3-4 days I encounter a strange situation where when I launch the Roon app to play a song, it will then automatically initiate a “wake up call” to the Devialet amp (to power up) but then once the streaming starts it comes up with “Audio device in Use” message (implying as if the Devialet is already committed to another input source) and it refuses to play until I do a Roon server reboot on the Antipodes DX.

I checked the Devialet amp status and it is definitely powered up and locked into the Ethernet input and not doing anything else. I don’t have any other input connected to the Devialet. The only input for the Devialet is streaming via Ethernet. Once I reboot the Roon server, everything is back to normal and I can play, stop, switch off, using the controls on the Roon app without any problem. This would be ok for 2-3 days, then the problem would re-surface and I’d have to reboot the Roon server all over again. This is very annoying.

It’s possible that you’ve hit upon an issue with Devialet, RAAT, and 1000Gb/s ethernet. Try a search. There are some things to try though: 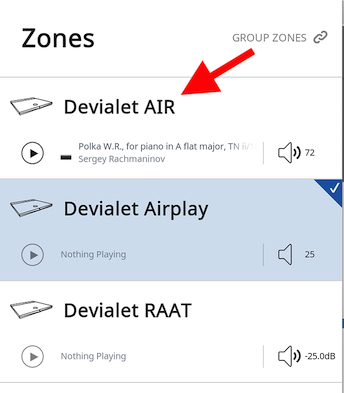 Thank you so much for the tip Mike.

Trying option 1 now and we’ll see if that will solve the problem.

BTW, what is Devialet RAAT and can I get this on my D400?

I‘m not too up on all the Devialet models and hardware configurations, but I think if your units have the Core Infinitely upgrade fitted, you can update to firmware 13.1.3 and DOS 2.2.4 which offers Roon RAAT. Please check this with Devialet.

The next time your system is in this state, could you try the following tests?

A) Change the input on your Devialet amp using the Remote. Then try starting playback to the Devialet zone in Roon.

B) Place your Devialet amp back into standby mode using the standby control in Roon’s volume widget. Then try starting playback to the device using Roon.

Thanks for the response John.

Will try it next time and let you know what I find out.

I tried (A) and I got the following message: “Roon lost control of the audio device because the input was switched”. The same message when trying (B) and ©. It just would not switch to Devialet-ETH (ethernet) zone.

Once I restarted the Roon server, everything went back to normal and played to the zone without any problem.

Have you noticed any changes to this behavior with the Roon 1.7 update?

I have sold the Devialets hence no idea.

Thanks for following up.