Audio devices and Library not available after 2.0 upgrade

Haven’t received the 2.0 update pop-up, so downloaded manually from roonlabs.com. Roon 2.0 not finding any audio devices and no music is showing in my library. I’m logged into Tidal and an external drive with local files is connected. I can still run 1.8 but it seems unable to download any updates, returning an error message when checking, and is only pulling through local files from the external drive, no tidal tags. 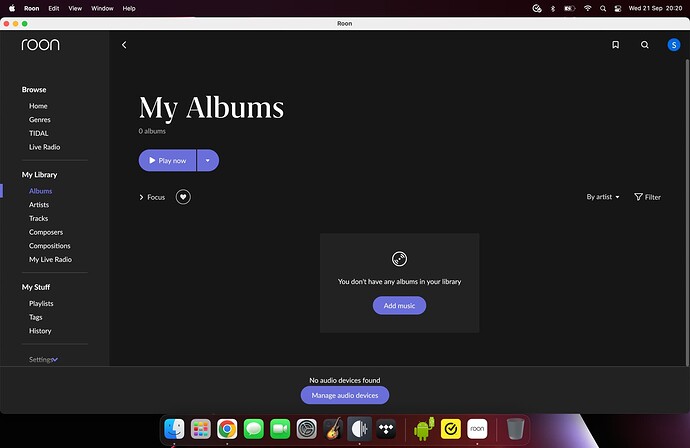 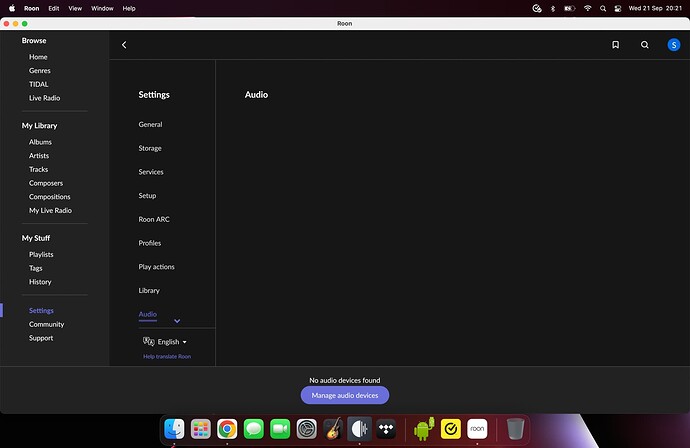 after discovering that the autoupdate on the Core has failed to install any updates for 4 months, I manually updated to version 2.0 resulting wiping out all of the library, including album and playlists. Tidal was unable to connect to the Core, and attempts to replace the library ate up my backups without any results. Ultimately gave up on 2.0, and downloaded 1.8 Legacy. So with that, guess what? I finally have a Legacy 1.8 Core that will not allow me to connect to Tidal, won"t recognize any audio sources, won’t connect to any of several Roon certified audio devices, and does"t have a library - all in one day. Tomorrow is another day. Just as my audio life has been truncated by today’s events, so may Roon be removed as well.

Your issue sounds nearly identical to my issues (as a result of multiple, recent 2.0 downloads & and a 1.8 legacy that didn’t work either).
I FEEL YOUR PAIN!!!
Roon has been so glitchy as of late … after having worked so well for months before.
Might be time to put it out of it’s misery … but I’m hanging on by a thread thinking they may just figure something out soon

Hi @Stephen_Cooper1. Frustrating right. Waiting on some guidance, presume everyone is busy with this. I’ve reverted to 1.8 legacy and its recognising the audio devices but not pulling any of my Tidal library through. We’ll get there I’m sure (eventually).

Agree @Jay_Boatright. Been very crashy of late, particularly my android remote. The gremlins that can appear in these upgrades are annoying and can truly test a man’s metal. But as much of a battle that it is, I think it’s worth persevering. Hang in there dude, we’ll get there I’m sure!

Had another look today, and was successful in downloading and activating Legacy 1. Here is the sequence I used. 1. Removed the Roon core from the application menu and dumped into trash 2. Removed the Roon icon from screen menu and dumped into trash 3. Downloaded Legacy 1.8 and moved it to Application folder in the hard drive 4. Opened up ( double clicked) Legacy from the Application folder icon and the sign-in screen opened 5. BEFORE entering signin information- clicked " backup" on the bottom of the sign-in screen ( followed the popup screen to pick proper backup folder) 6. Waited for backup to complete, and 7. THEN sign -in with user, password 8. Sign-in now available for music service (for Qobuz only) , once completed took me to the operational Legacy core 10. Signed up for Tidal through the services menu ( successfully, with all previous albums and playlists). 11. Legacy was now recognizing and linked to all my audio endpoints, all Qobuz and Tidal music was restored, and all my previous settings were restored without further intervention

Thanks @Stephen_Cooper1 for sharing that. As luck would have it and as if by magic, on launching 2.0 this morning, everything has resolved.