"Audio File Loading Slowly..." message for some endpoints while others work as expected

Thank you for running those tests. I am taking through the logs now, and I do see quite a few abnormal traces listed in them, so I am going to go ahead and reach out to our QA team who will be able to provide further analysis for this issue.

Do note, it may take a bit of time for my request to reach their queue, but I think it’s best that we loop them in and request their expertise for this case. Thank you in advance for your patience here, and I will reach out as soon as I have any further info to share.

Can you please let me know those two pieces of info when possible?

Hi Noris, thanks for getting back to me. Here’s the screenshot - it will take a little longer to configure an Aires over ethernet.

Hi Noris. So, now Conservatory Roon (Aeries Mini), the iMac Core (Study headphones & Study speakers) and the Orbi router are all connected to the same gigabit ethernet switch. The Aeries Mini is outputting via analogue (!) rather than USB.

After a few dozen end-point switches wirelessly from my iPhone XS, without rebooting any network device or anything except the Aeries mini, not only are the Conservatory Roon and Core endpoints solid, but so are all the endpoints I tried (including the iPhone XS).

Could the problem be interference between the two Aeries Minis over WiFi?

I can’t really get ethernet to either rooms where the Aeries Minis live, except perhaps ethernet over mains.

Thanks for your on-going help.

Secondly, I can now successfully play over AirPlay to grouped RoonConservatory+RoonDayroom+Phantoms+Homepod, which hasn’t worked for months.

Could this problem stem back to September when I bought the second Aries mini, and they have been intermittently colliding over WiFi ever since?

BTW, I believe that all of this is independent of the iPad disconnecting problem reported Remotes are losing connection to Core machine and iOS remote connection trouble, which is still happening.

Thank you as always.

So, I spoke too soon.

On going back, Roon Conservatory claimed to be playing (with play time progressing), but no music emerged. Roon Dayroom refused to play, then rebooting Aries Mini did play, then went back to slow loading.

It’s like there is some buffer which gets reset when I make a configuration change, and when it’s exhausted, chaos ensues. 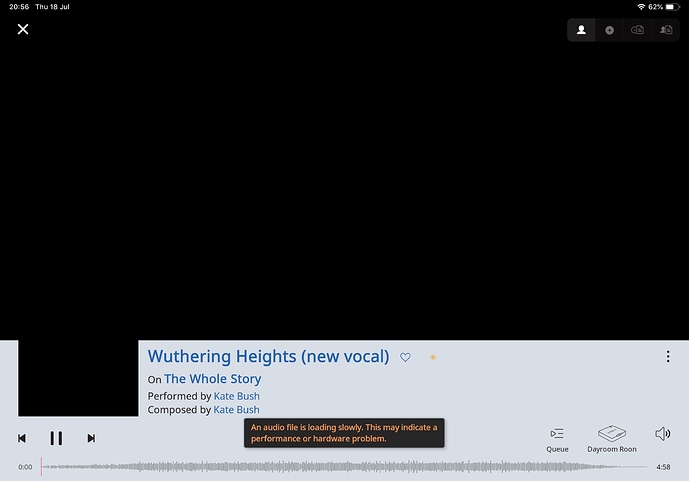 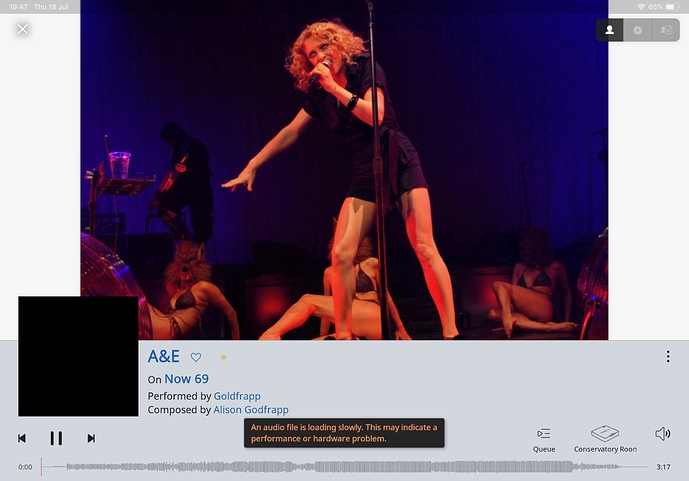 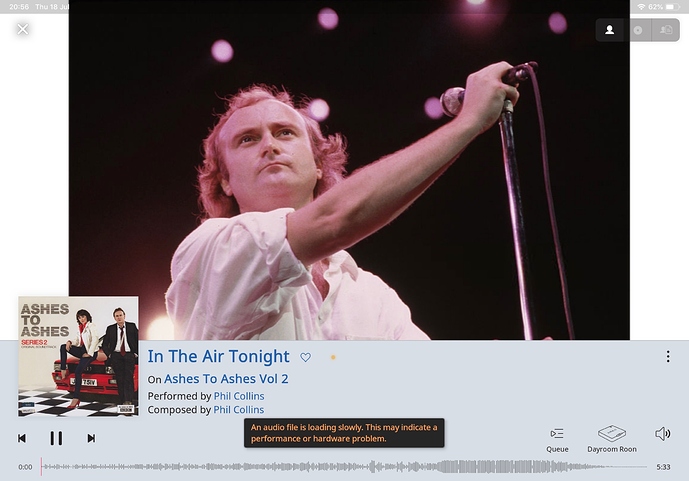 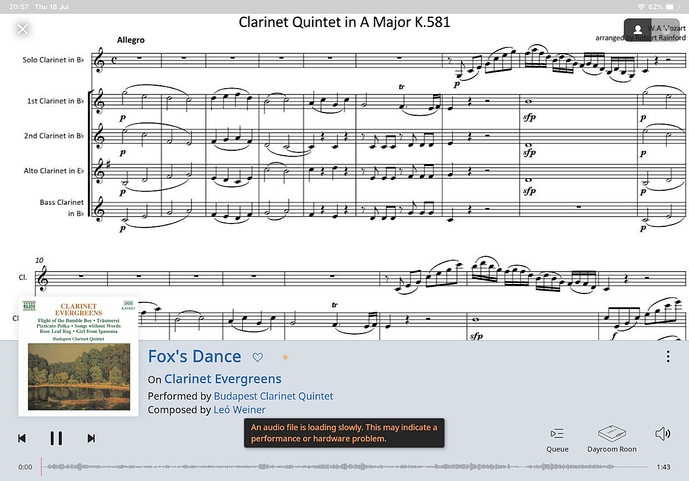 Thank you for the update here but to properly troubleshoot this issue, we should try to only change one variable at a time to see where the issue lies. I am a bit confused as per your latest posts, let me try to clarify a bit:

As I mentioned, it would be best to take troubleshooting one step at a time and see where exactly it stops working. By this I mean:

If you can perform this test, it should give us a good data point. I should also mention that the symptoms you are describing may also be an indication of an unstable network setup or an issue with the router itself. As such, I would reach out to Orbi and ask if they can run a diagnostics check on all of your Orbi gear just in case there are any hardware issues in this regard.

Hi Noris, thank you for your update.

I take your point about changing one variable at a time. It is significant I think that following reboot or reconfiguration all end-points can be completely solid for a while: the problem takes time to rematerialise.

To clarify on the points above:

I have powered-off Roon Conservatory for the time being (reverting to Chromecast in that room).

iMac Core, Orbi Router and Roon Dayroom (via power line) are connected to the same switch.

I’ll let you know how it goes.

Hi Noris, with the configuration above, music has been playing perfectly between Dayroom Roon (via power line) and Conservatory Chromecast. And I’ve just walked around and successfully transferred to:

So, it seems that all is good with just one Aries Mini online.

Hi Noris, yesterday music was playing fine from Conservatory Chromecast when I had a Core crash: is there a way to upload the full dump?

I restarted the Roon app on iMac.

Then I had several timeouts on Dayroom Roon (perhaps that’s not surprising?): 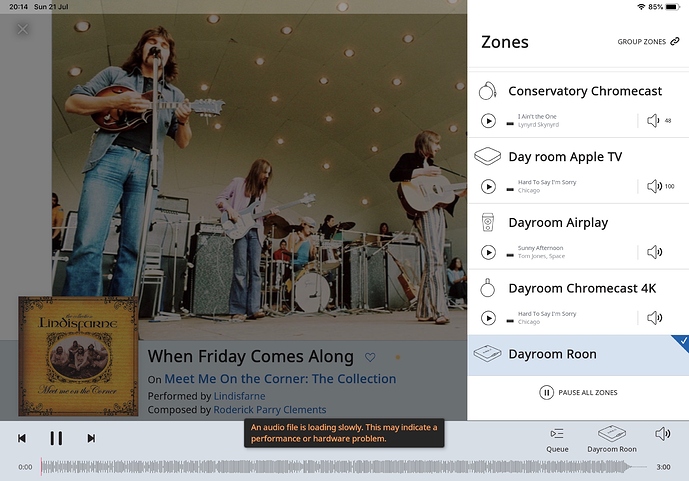 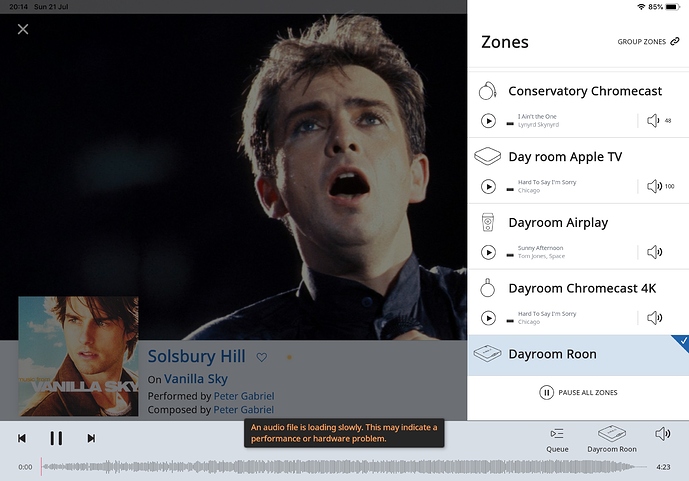 I then switched zones to Barry’s iPad (paired with a Bluetooth speaker), and after a few minutes walked outside. At this point the iPad probably changed access point, I imagine from Orbi Dayroom to Orbi Garage. The music stopped playing, and in the Roon app on the iPad the end-point Barry’s iPad had disappeared: 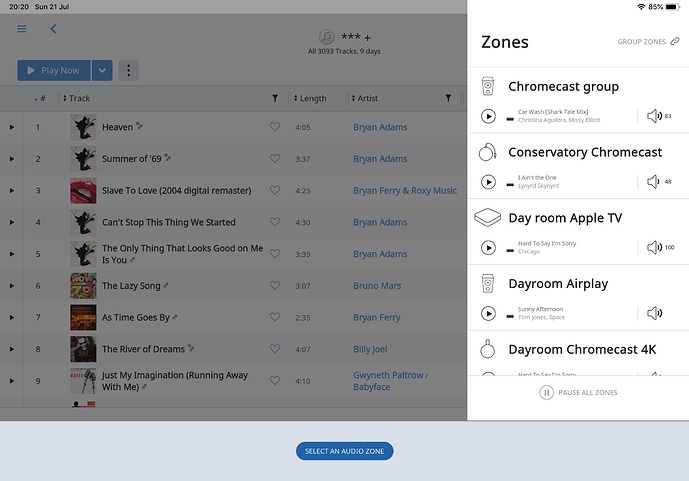 Using the iPad, I switched zones to Conservatory Chromecast, which (as always) performed flawlessly.

Thanks for your continuing help with this.

it seems that all is good with just one Aries Mini online.

Thank you for confirming this aspect. Since the Dayroom Aires is working as expected, we should take a closer look at the Conservatory Aires, possibly reinstalling the firmware on the device would be a good next step.

yesterday music was playing fine from Conservatory Chromecast when I had a Core crash: is there a way to upload the full dump?

Yes, if you wish you can upload a log set to Dropbox or Google Drive and provide a link, I can take a look that way. Also, diagnostics mode is active but I do not see a new report yet, next time you boot up your Core I will be on the lookout for any new reports.

After sending the crash log over, I think it’s best that we try to verify the behavior of Roon with a fresh database as a temporary test. You can set your old database aside by using these instructions and I would be curious to know if they help mitigate the amount of issues you are seeing:

Thank you for sending the log over, I can confirm that I have received it.

Please try the second part of my instructions when you have a chance, I would like to see if the same issue occurs with a fresh database. Note, please do not restore from a backup once you set the old database aside while we run this test.

Hi Noris, sorry for the delay.

Firstly, I have swapped out the Netgear Orbi WiFi in favour of Linksys Velop, so the timeout issue is not being caused by idiosyncrasies in the Orbis.

I now have two Roon folders that I can switch between. The new one has scanned the same music folder. I have not bothered to synchronise iTunes playlists, and it does not have all my custom artist images.

Starting from the skeletal Roon folder, I could not provoke the timeout switching between Dayroom Aries (ethernet over power line in, USB out), iPhone XS and Lounge Chromecast.

Switching to the full Roon folder, I generated timeouts after a few switches:

Switching back to skeletal, I could not provoke timeouts.

Switching back to full, I did provoke timeouts:

So, it seems that my full Roon folder is part of the cause. Also:

I do hope that this update provides you with more to go on.

PS: I remembered that I had Memory for Photos/Artwork set to 2048MB, so I set it to Minimum. This seemed to make things worse rather than better, and generated:

I changed to 1024MB: this generated more timeouts. 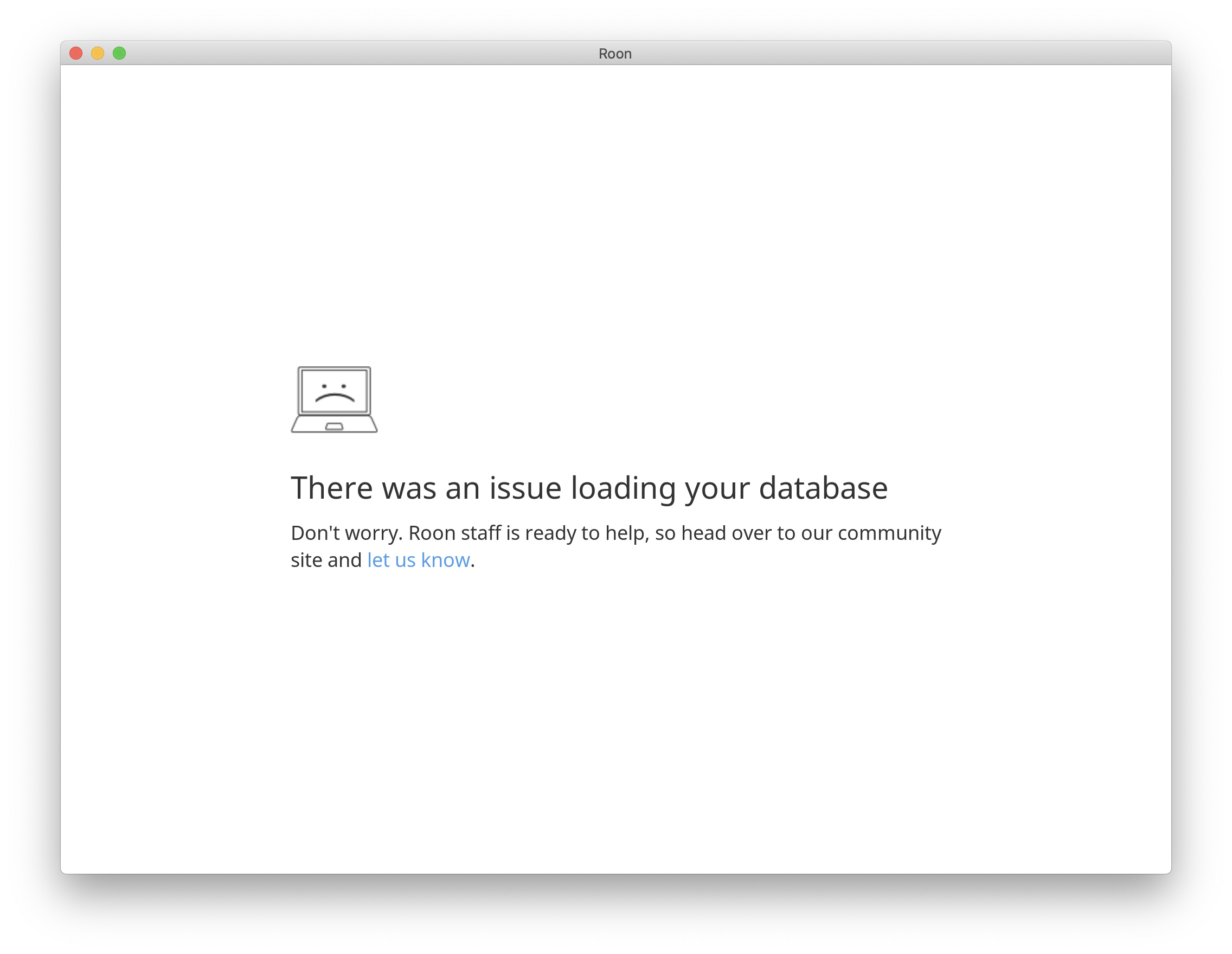 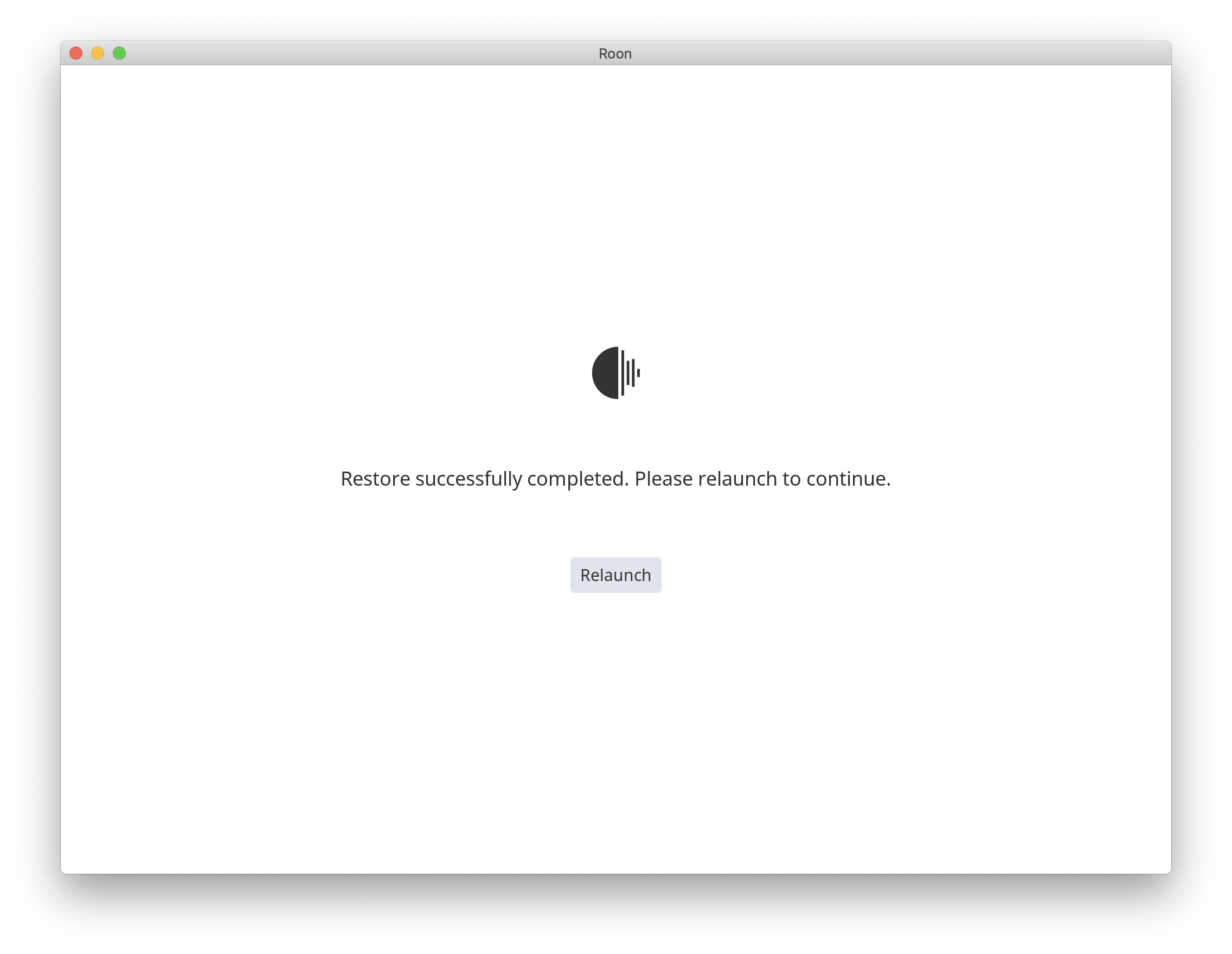 Then I get a continual blue busy circle: 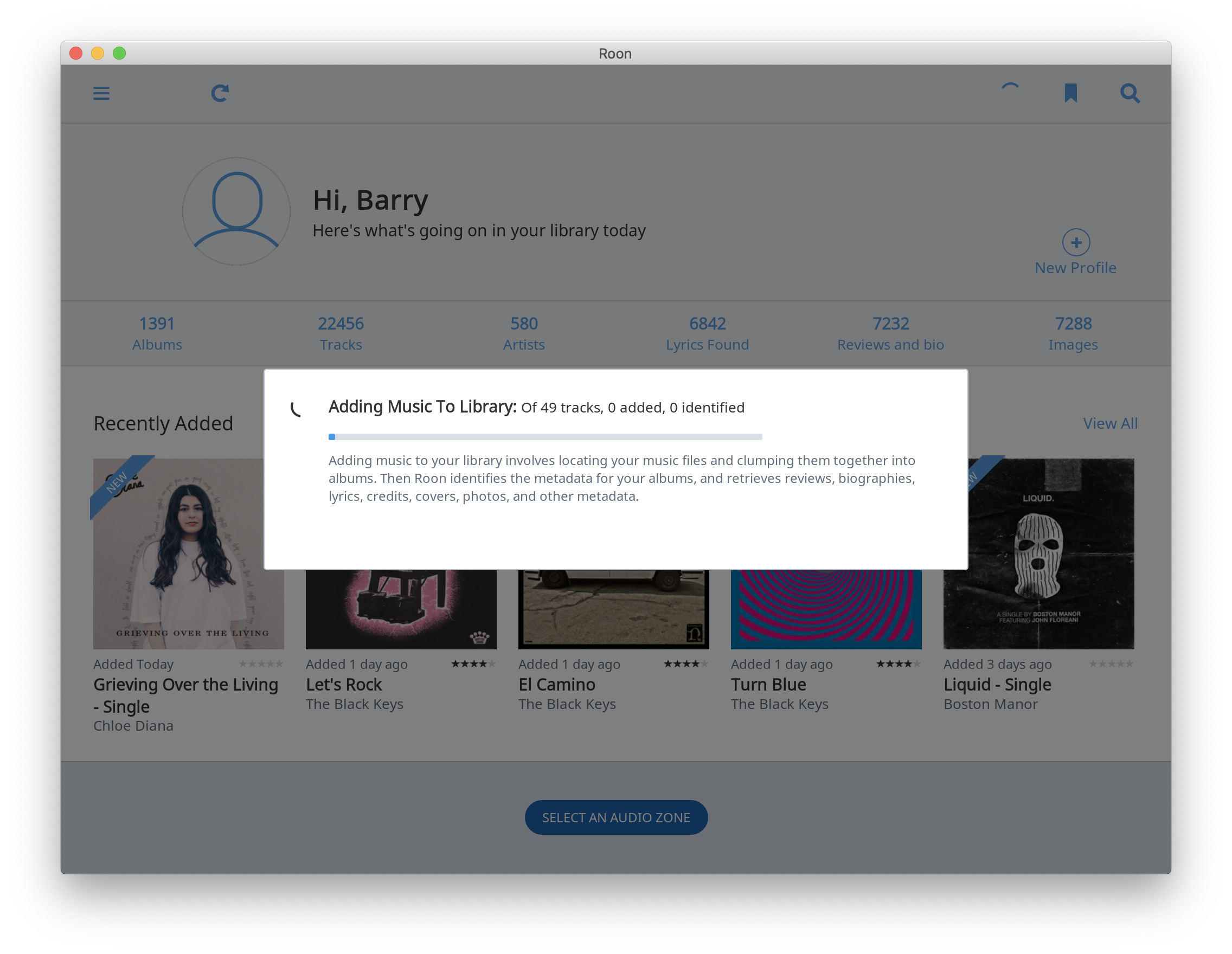 Music is still playing through Chromecast endpoints (but see my tale of woe at https://community.roonlabs.com/t/audio-file-loading-slowly-message-for-some-endpoints-while-others-work-as-expected/73373/19)

Is it just me?

The busy circle is still spinning

I have just tried to enable diagnostics mode for your PC’s new install, but it appears that the diagnostics are not coming through. Can you please send me a manual copy of your logs by using these instructions and send them via Dropbox / Google Drive / Send.firefox.com?