I’ve got the audio file loading slowly problem, but the other fixes don’t seem to work. I have DSP turned off, and I’ve disabled all other zones (except my MacMini, which is the server) to prevent any chance of a group zone throwing things off.

This only applies to hi-res files, not regular CD rips or Tidal. It also only applies when I’m trying to play through my Oppo UDP-205. Generally, the first song on the album will play for a few seconds, stop, and Roon would try to queue up the next. Sometimes the next song attempts, and sometimes it has to skip a few more before trying to play again. Roon then gives up trying to play.

The signal path does show “Audio Distribution – audio is being distributed to multiple outputs” but I promise it’s not! There isn’t another output.

Could you post screen shots of the audio setup tabs for the oppo zone and also the audio path while playing.

Also the specs, year model etc of your core machine. Also include the connectivity path being used to get to the oppo…lan/wifi/hdmi/usb etc

Could you provide a screenshot of your signal path pop-up? That should give us some insight into what is happening. Also, the “Audio Distribution” stage you’re seeing in the signal path is normal on on OPPO units, it’s accurately describing what’s happening on the device itself as it has analog and digital outputs.

I’m running a MacMini with a 2.6 GHz Intel Core i7 processor and 16GB of RAM. The Oppo is connected to my network via WiFi. I’ve attached the pictures you requested.

Oh, and I discovered Tidal isn’t working either. Not sure if that’s a new development or not – my Oppo is pretty new. 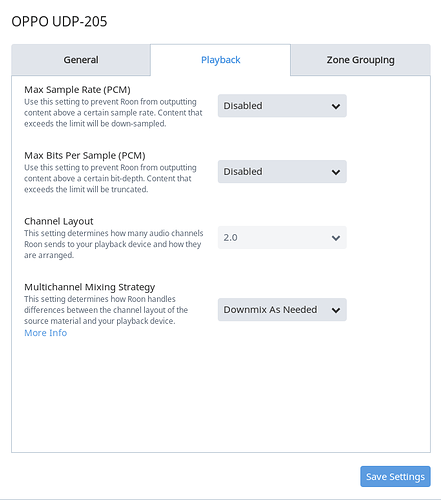 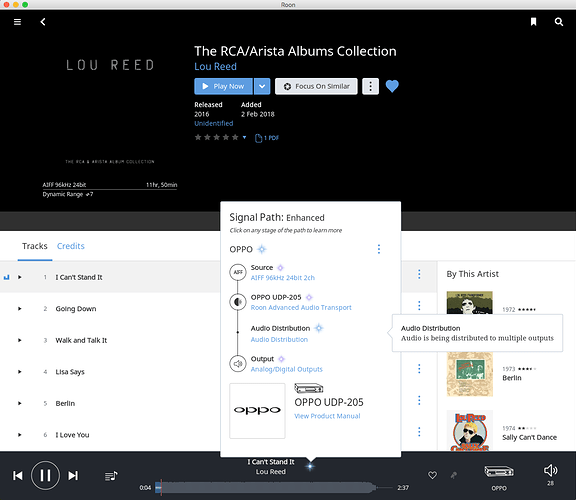 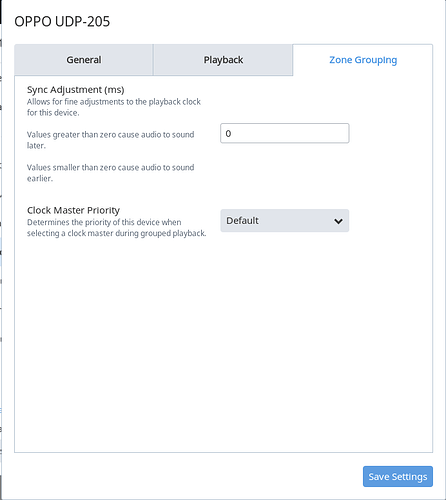 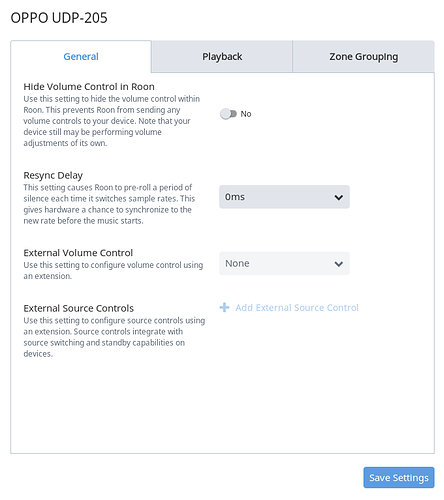 Is there a way for you to temporarily connect your OPPO UDP-205 unit to your router using an ethernet connection? The behavior you are describing is most often caused by WiFi related issues. Thus for troubleshooting purposes, it would be helpful to eliminate the WiFi connection as a variable in your setup to see if the issue is resolved or is happening somewhere else in your system.

Thanks, John. Moving to a wired connection has resolved the issue, though the signal path is still characterized as “enhanced” because “audio is being distributed to multiple outputs.” I’d really like to have no DSP at all. Is a clean reinstall of Roon worth trying?

When using the OPPO UDP-205, the “Audio Distribution” stage in the signal path will always be showing. It is not applying any DSP to the signal, all it is doing is showing that the signal is being outputted to both the analog and digital outputs of your device.

Thanks, John. That sort of conflicts with the KB page here that says an all-purple signal path will will be the purest.