Is it on Roon or on Auralic ?

Can you post a screenshot of Roon’s “Signal Chain” popup during DSD playback on the Aries? That will tell us what’s going on.

That means that your Aries thinks it’s connected to a DSD capable DAC. Since it’s reporting DSD capabilities to Roon, Roon is sending DSD, and then the Aries is DoP packing it and sending it to your (non-DSD-capable) DAC.

Try turning off the “DSD over PCM (DoP V1.1)” setting in Lightning DS: 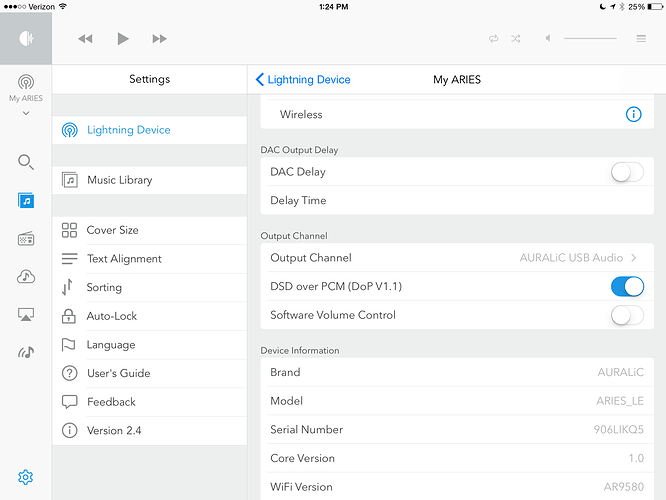 As mentionned in my first post, native DSD is already disabled on Aries.
It plays white noise if I send it DoP files in upnp or open home mode
If it is on the Aries to tell Roon its DSD setup, then there is a bug in Aries firmware.
I will reboot everything, just in case, before getting in touch with Auralic.

Yes, it is on them to report the capabilities to us properly.

I tested just now, and my Aries is exhibiting the same problem. We will be in touch with them.

You can have Roon hide the slider if you don’t want someone to actuate it by mistake (Settings -> Audio -> Gear icon -> Hide Volume Control in Roon).

This should get you the result you are looking for until they can push out new firmware. I’m emailing our contact over there right now.

EDIT: just sent the email. They probably won’t get it till Monday (since it’s already the weekend in China), but they are generally pretty responsive to our requests.

I just got a response from Auralic’s CEO. He says they will be fixing this issue for their next firmware drop.

In the meantime, the workaround that I suggested should have you covered.

Thanks for having informed Auralic.

As I am in the middle of reviewing Roon for for french magazine www.audiophile-magazine.com, it is not a big deal not having DSD right now.
Support and answers to issues on this forum are also part of the review