Auralic’s Aries G1 Transport – How Important is the Bridge? Maybe more Important than the DAC?

I’ll answer that question first up by admitting that for me, the G1 has been far more important than I previously realized in my pursuit of audio quality. You could find the same – it depends on the system of digital input being used for your DAC. In this house it is hard wired, not wireless, with quality Canare cabling being used to carry the balanced digital signal out from the G1 and hard wired input to the G1 being from the home network…

Bear with my while I relate my recent audiophilia journey and the reasons for my re-admiration for the G1 will emerge.

Moving from a Meridian system into ROON over 4 years ago required a bridge so the first unit was the smaller Auralic Aries. Next move was a better DAC in the form of an LKS DA-004 modified by Rick Schultz. Several headphones were tried during this journey starting off with a Sennheiser HD800, then the 800S and finally the Focal Utopia. Headamps were the Auralic, the Violectric V281 & V280 and finally the Audio-gd Master 9, a unit which surprised me with the difference it made and had me reassessing the importance of the amplifier. At around the Violectric/Focal Utopia mark I purchased the Aries G1 to replace the smaller bridge. All moves were positive with some very nice sounding music (generally classical), the result.

But the audiophilia bug kept nagging me despite the superb AQ having reached the stage where well recorded CD quality FLAC files sounded just as good as hi-rez.

Could the highly regarded and well reviewed Audio-gd R8 DAC improve things further? Unable to resist, I purchased one and set it up in the main headphone system so, with a passive balanced splitter feeding the LKS and the R8, a simple switching of the Master 9 could compare these two toys.

The result was I could hear absolutely no difference in the sound between them, something which frustrated me and annoyed some posters who owned the R8 and found it difficult to accept what I said. All sorts of suggestions about what I was doing wrong followed with the only plausible one for me being that it was unfair to compare the well bedded in LKS to an R8 with only a few hundred hours on it. BUT, the audio quality of the two DACs remained identical and a few hundred more hours of bedding in for the R8 made no difference.

Well I’ve finally woken up to what is going on with the digital to analog processing here.

Both DACs are receiving a balanced digital signal from the Auralic’s Aries G1 Wireless Streaming Transport, a unit very positively reviewed for its ability to deliver a quality digital output, stripped of heaps of jitter. So the following DAC has its hard work already done and sophisticated units like the LKS and Audio-gd are overkill!!

Therefore it is unsurprising I hear no difference between these two DACs but it also is not a valid conclusion to say there is no difference in their processing power because neither is really being challenged!

It all opens the question about how simple a DAC can be following on from the Auralic’s Aries G1 Wireless Streaming Transport? And a very simple one might indeed do the job as I inadvertently discovered (but did not realise) recently when I bought a used Schiit multibit Bifrost DAC for a friend and was highly impressed with the audio it generated in this system. I did not listen for long so did not compare it to the LKS but now wish I had as it might have prevented me from spending more in a useless attempt to improve AQ with a “better” DAC.

So folks, no need to be upset at my claims the R8 is no better than the less expensive LKS. In different circumstances it might indeed be better but there is no question it is no better in this system. That in no way reflects adversely on either the Audio-gd or LKS. BUT it does reflect very positively on the Auralic’s Aries G1 Wireless Streaming Transport, an expensive device, but one which can do far more for a good system than I previously appreciated. 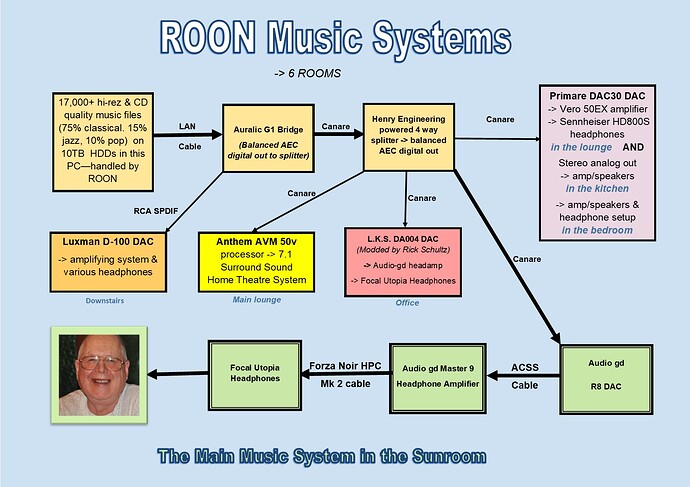