is wrongly identified with “ave maria” composed by caccini & schubert (???)

but it’s a song by redondo & paiva.

i cannot correct this, as it’s a problem in the composition identification. no way to change it. 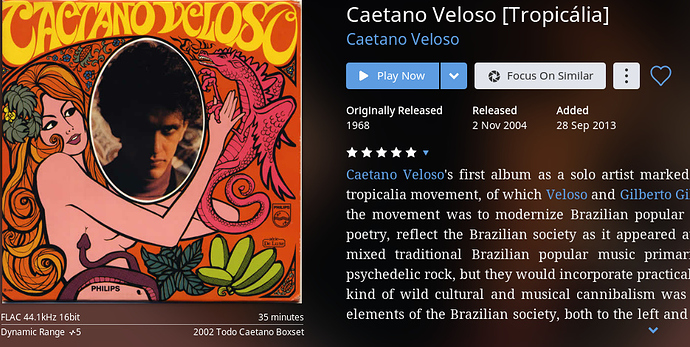 is a song by caetano veloso, wrongly identified with ave maria by caccini. 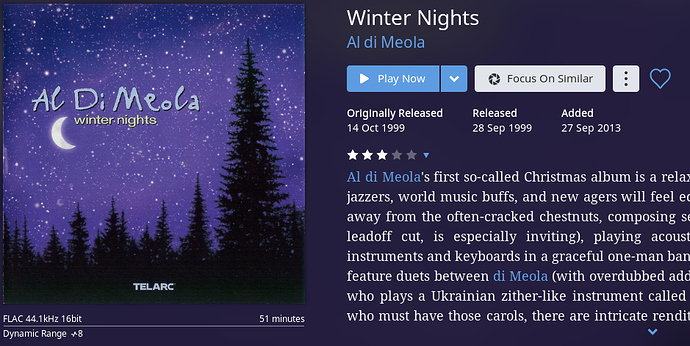 should be gounod’s ave maria (after bach) but it has been identified by roon (again) with caccini’s ave maria.

i’ve reported some of these wrong composition identifications.
at the moment, it seems to me that there’s no way to correct them on users side.
everything would be much easier if… there was a way for users to manually identify a composition.

I see that there’s an “un-merge Compositions” facility in the Library settings. Does this help to break false linkages?

Hi Geoff
no, it doesn’t.
-you can merge compositions…
-…and you can un-merge the merged ones with the corresponding facility in the library settings.

but you cannot correct a wrong track-composition association in this way.

the very same happens with composers: you cannot edit the association.
but in that case you can edit the composition, remove the wrong composer and ADD the correct composer (if you are lucky enough and he/she is already there in your library).

i have A LOT of bad track-composition associations… and i’m sure that i’m no exception. that’s why i asked (i think somewhere in feature requests) a way to identify manually a composition (in a way similar to album identification… a search engine in roon DB for compositions matching a track).

and i have noted similar problems in other posts (tracks with NO composition associated, even though composition exists associated to other tracks/performances).
but i have to say that at the moment i had no reaction form the staff members…

The criticisms you make are fair and need to be reported, exactly as you are doing. Ultimately they will help improve Roon.

I suspect that the absence of reaction to your feature request suggestions is not because the devs are ignoring these issues, or think the suggestions have no merit. My understanding is that the work to develop an improved identification and grouping experience, particularly for Classical, is progressing methodically. Some of the pieces required have been put in place “under the hood”, without affecting what we see. It may be that final decisions about the extent of user control and access haven’t been made.

For the moment, the most we can do is draw instances where Roon gets confused to the attention of the devs so they can understand whether the changes they are developing are sufficient. Thankyou for doing so.

in my opinion, the wrong track/composition and-or composition/composer association should be considered a BUG. it makes the program working non properly, as it creates wrong links between performances, or does not create them when there should be one…
in a sense, it spoils what (in my opinion) is the main feature of roon itself.

maybe i am a bit too severe… but it’s a (personal) fact that in 80% of new albums i add to my library, there are errors like those. i can’t tell about the complete library (thousands of albums imported), but statistically…

and i can say that asking every time for a DB correction in the metadata problems section of the forum is not so exciting.

these are 2 different “ave maria” compositions 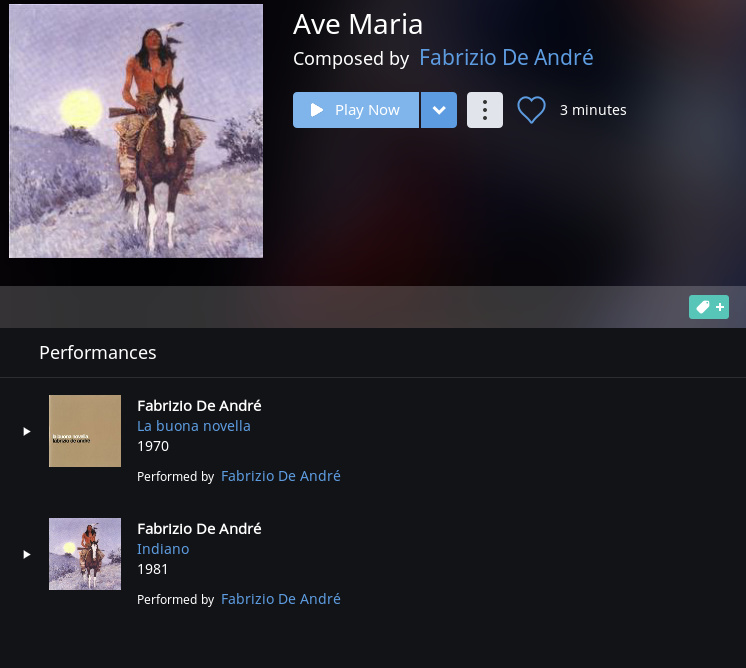 image.png1086×91 7.31 KB
the track is credited to … everybody: gounod, bach, schubert and anon.
the composition link takes to: 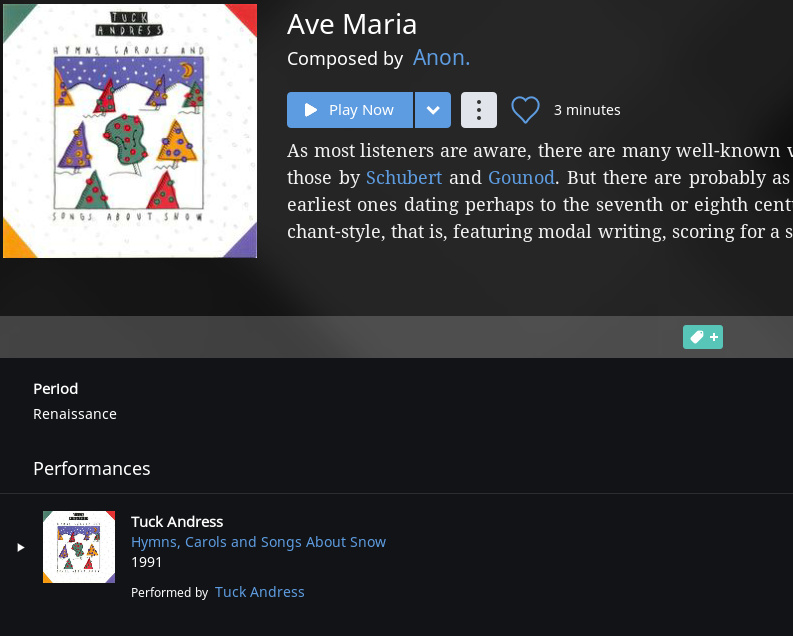 but actually it should be schoubert’s ave maria. 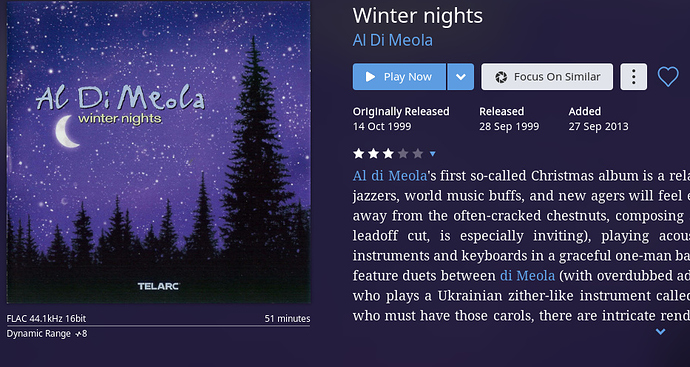 this should be gounod’s ave maria. but in roon database it links to caccini.

image.png1082×86 7.22 KB
this is a caetano veloso composition “ave maria”.
but in roon it’s attributed to caccini 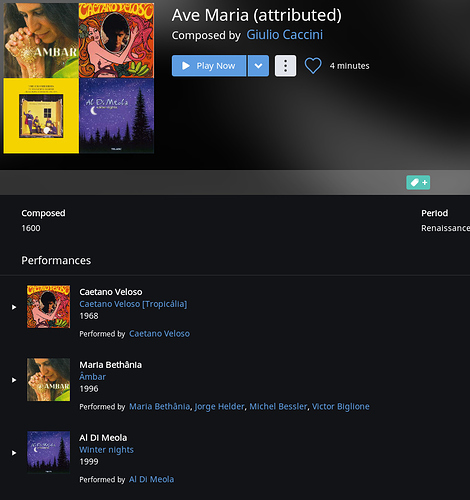 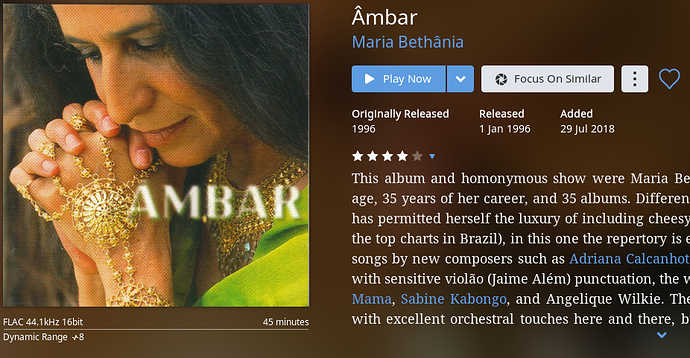 this is a composition by paiva / redondo.
but in roon is again attributed to caccini 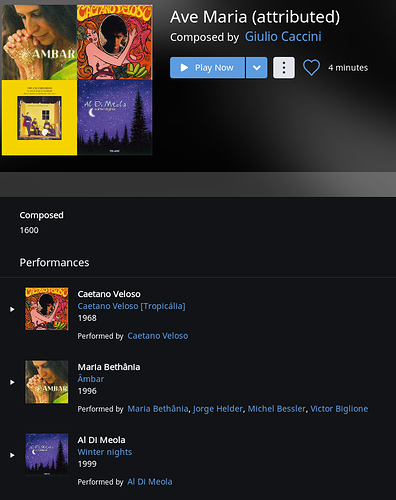 Did this ever go anywhere?

I find it really hit and miss whose Ave Maria is attributed. Mostly it’s a mashup between Schubert, Caccini and Gounod/Bach. Both The Cranberries (To the Faithful Departed) and Aaron Neville (Warm Your Heart) do the Schubert Ave Maria but meta-data attributes Caccini. I cannot see how to break these bad composer links when they happen.