The review for this album is not for the actual album but for a budget reissue. It also has the wrong album art. 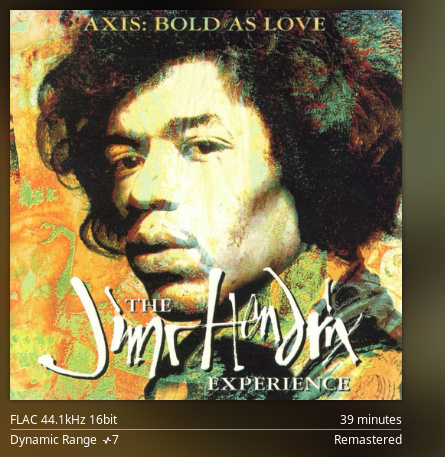 This is the album art I see and it is correct for me (ie it is the CD I own and ripped) but you are correct that the description of the release is incorrect. There have been so many reissues over the years of Jimi’s albums, many with different album art. I presume you mean it is not the original album art if that is the version you have ripped?

I bought that series of reissues on CD when they came out and they all had redone album art with fancy booklets and the original album art inside.
The alternatives presented when you Edit the album don’t seem to have artwork with them so you can always add your own.

Hi guys. As I posted recently in another thread, at this time we don’t offer alternative cover art; fundamentally, this is because the current system is more focused on albums rather than specific releases (though there is some crossover in terms of identifying the correct tracks on a particular release). We’re working on a new system which should allow us to present different options here.

It’s actually the first time that I’ve seen the artwork above and, whilst matching Anthony’s CD, it certainly isn’t what would be regarded as the canonical artwork for the album (which is what we strive to achieve). The reason this has happened is that Rovi’s definition of the “main release” for the album, from which we pull the canonical artwork, doesn’t have a hi-res image; so we pull the image from another release instead. In this case, unfortunately and unusually, the artwork is not canonical. I’ve asked Rovi to review their metadata here.

As for reviews: again, sometimes our algorithm gets it wrong. This is also something that our new system should handle in a much better way, but there’s not anything we can do to change it now without huge knock-on implications throughout our entire database of millions of albums. I’m sorry about that. [FWIW, the review for Bob Dylan / Bringing It All Back Home in my library really annoys me as well as providing motivation to sort it out.]

Robert, perhaps this URL will help? You can paste it from clipboard as a new image in the Album Editor.

Agreed, not the canonical cover but it is the one that matches the CD on my shelf. This is very important for the significant other in the house for ‘her’ CDs, so those always have exactly the same cover as the CD we have, to avoid confusion when browsing Album view.

This is very important

Edit: We’ve actually got two copies of Elvis Costello’s Armed Forces: a US one and UK one, which have different covers.

As you noted, the art you have is from the first round of Experience Hendrix reissues. I suppose I agree that one’s art should match the cover one has, though I personally perfer to have the original art wherever possible. I hate it when, for example, the original art is obscured by a “Special Edition” banner or some sort of sticker touting a hit track. Also, FYI, the edition you have has weird mastering choices (I think by Alan Douglas) and is far inferior to the original Reprise version. The current Sony/Legacy edition, which is for sale on Amazon for less than $10 has superior mastering by original engineer Eddie Kramer (though still not as good as the Reprise IMO).

@joel, you say that there is a database issue with fixing this. Is there a reason why one can’t manually edit the reviews or add one’s own? I have literally hundreds of albums that are identified yet have no reviews at all. In some cases the AllMusic review isn’t picked up but in most instances, AllMusic has no review at all. I’d love to be able to add my own.

We’ve actually got two copies of Elvis Costello’s Armed Forces: a US one and UK one, which have different covers.

Interestingly, my discovery of the review and cover art issue came because I discovered some corrupted tracks in my rip of Electric Ladyland. When Roon originally imported that album, it used the original Polydor naked ladies art but the re-rip chose the US cover instead. My Axis was old the Reprise CD that was ripped with the original art. Somewhere along the line that got replaced with the Universal reissue art. I had already fixed it with a similar high-resolution version to the one you posted.

Also, FYI, the edition you have has weird mastering choices (I think by Alan Douglas) and is far inferior to the original Reprise version.

Yes probably, but I waited ages for these to become available as Remastered versions on CD. Problem is it is only in hindsight that the decent remaster is revealed and there is much debate as to which sounds the best and from which ‘master’ tape it has actually come from. And of course being actually able to purchase the ‘best’ sounding remaster in whatever part of the world you are in is another story in itself sadly.