B25-B44 Strange behaviors in "My History" [Investigating, Ticket In]

Ok, it’s probably part of the sync problems you already know, but looking at the “My History” section of Roon, for the tracks played on ARC (both downloaded and played offline, and streamed from the core) you can see some strange situations:

The problem is that it doesn’t always happen in a systematic way. I ask the staff and the other beta testers if you can test playing the tracks in various ways, always checking the consistency of the listening history

OS: Android
Core: Windows
All tests were done with local files (I don’t use streaming services)

Hi, @Daniele_Piancastelli, sorry for the late reply here. We were able to find several problems in that area and put in ticket for the dev team.

Thank you for reporting these.

Thank you @ivan ! I’m monitoring this part more closely and have found another error:

A few days ago I played, directly from the core, some new albums that have never been played. In the “History” tab they were reproduced at 100% but, in the album section, the count of the reproductions of the single tracks remained “0”

B31: I see no improvement here. Usual problems both in the “History”, and in the count of the reproductions of the tracks

B40/1107:
a few steps forward here:
yesterday I listened to 2 songs online (B39) and today I listened to 2 albums downloaded with the core offline (first album and half of the second with B39, last part of the second with B40). I also tried the “repeat” on a song by listening to it 3 times consecutively to check if the track count was increasing correctly.
All tracks were played once except the “repeat” track which was played 3 times. While listening I paused and resumed listening several times, as well as closing and reopening ARC several times in addition to updating to the B40).
Tonight I connected ARC to the core and checked the listening history:

Another error detected yesterday on the History section: I was listening to music from the core on two different endpoints while browsing ARC on my smartphone. There was a core crash and when I came back the music had stopped on both endpoints but the 2 playback lines were already appearing in the “Hystory”. I resumed listening by finishing the songs and another 2 listening lines were added to the “History”. The track count is also increased by +2 although, in reality, I only listened to the songs once.

I am having inconsistency in the tracks played remotely in ARC showing up as credited played in the track history, although the album shows up in the recently played section.

Ok, this is weird.
Now many of the tracks I talked about in the previous post have disappeared from History and the playback count has decreased

You can compare the screenshots here with the previous ones 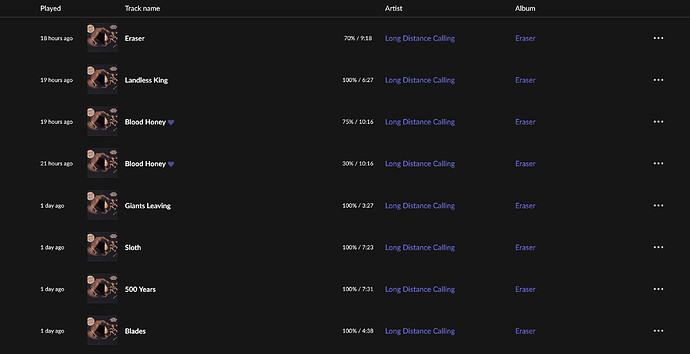 Thank you for flagging. We’re looking into this.

I did some tests to verify the cases of duplication of the track (I was connected to the Core):

I confirm that even with the latest ARC and Roon builds the problems are still there:

tracks played but not counted / visible in the History (this also happens with sections played in roon and not only with ARC), tracks added to History and counted in a first moment and then disappear on a subsequent access to the core.

I also had a new case where, synchronizing the history between the ARC and the core (some songs had been played offline) and deleting a mistakenly duplicated track in the history, all the history that ARC had synchronized just before was gone.

I don’t know if the roon team had taken the time to tweak something before the release of builds 44/1119, however this unfortunately doesn’t work yet

I haven’t read anything about this in the latest beta release notes, so just to confirm this problem is still here

Any updates on this?

We merged several tickets with ARC 1.0.1, 1.02, and 1.0.3 to improve sync stability and target specific playcount recording bugs that appeared under certain queue conditions.

That said, sync won’t be instantaneous for phones with memory pressure, or phones experiencing intermittent or poor connectivity (particularly if they haven’t been on the home network in some time, as ARC will rely heavily on cached data).

However, reviewing your reports and taking a pass-through of ARC diagnostics reveals some evidence that your troubles with ARC are ongoing. We definitely want to pinpoint what’s going wrong in your specific case with the S9.

If you don’t mind, can you please bring us up to speed with the most recent symptoms of your history mismatch between Roon and ARC?

Hi @connor
with the latest builds it seems that things have improved. To be honest, while the previous builds i tested them almost exclusively in offline mode and synchronizing the core even a day or two later, i used the 75 exclusively online. For now, the only anomaly i’ve managed to reproduce is the one you see in the attached video.

As you can see, when i come back in ARC “My Hystory” updates by adding the track and adds another one when the same track ends as if i had listened to it twice.

I don’t know how Roon manages the tracks listened to (each track being played is assigned a unique key which remains valid until the track ends or skips to the next one in order to always consider it the same?).
Here it seems that Roon interprets them as two distinct plays.

Hi @connor,
I tested ARC in offline mode for two days and the situation is worse than when i use it online (previous video post):
The problems are mainly 2:

It’s all captured in this video.

The test scenario was:

let me know if you need more details

I report another anomaly found in these days:

Playback with Arc connected online to the core, of albums or random tracks. Some tracks have not been recorded in the “My History” section (consequently no +1 to the play count) 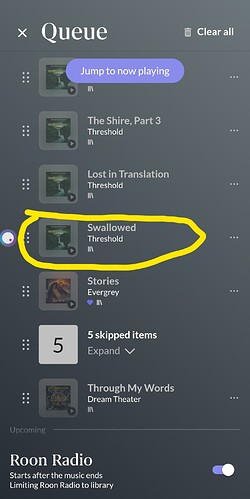 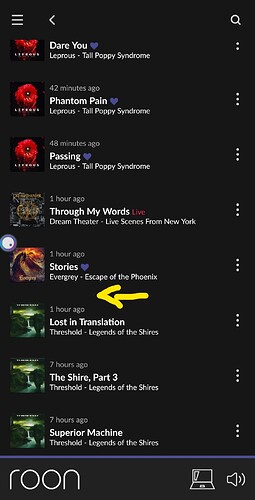 Tracks played in Arc and not added to “My History”:

Other anomaly:
the following tracks were played on ARC on the afternoon of November 20th and appeared regularly in the “My History” section.
In the evening the sever was turned off and when i turned it back on November 21st they were gone and the count reset (it happened again in the past but with tracks played directly in Roon):

Also this morning, when the server was turned on, most of the tracks played yesterday in ARC disappeared from the history

Thanks @Daniele_Piancastelli we are looking into this one. Really awesome documentation, it will make our lives a lot easier, much appreciated.