B475 update is in progress but is duplicating my music

Description Of Issue
The update is in progress and it is copying (i.e. duplicating) a myriad of my music on the external HDD on in the iTunes folder on my C drive.

Does anybody know what’s going on?

Can you say that again more clearly and in more detail so we know what is happening?

A screenshot of Settings>Storage and one of the file structure from Windows or Mac file explorer is usually very helpful for solving this.

Does anybody know what’s going on?

Can’t be known until there are more details. but the most common reason is a duplication of the file path(s) in Settings>Storage. If the files are co-located in more than one file path, Roon interprets this as “Oh, you want two copies”.

Can you share a screenshot of Settings > Storage as Scott suggested above?

Another problem is that Roon has spit many albums in two, ie the first song is separated from the rest of the album - so two albums are visible - I’ve been spending my time using the edit/merge function of Roon to reunite the albums.

I’ll revert with the duplication issue mentioned earlier (to look mire into it).

Thank you for your rapid offers to help.

PS @Roon - notwithstanding these issues which are a pain, I’m sooo happy that Roon is back !

My set-up is a simple one : My music is managed through iTunes (e.g. ripping CD’s, creating playlists) on an iMac. I have no subscription to a streaming service and prefer to rip CD’s. The iTunes music folder (approximately 2 terabytes of non-compressed AIFF files) is resident on a Lacie HDD (connected to the iMac via USB). I then play my music through Roon (using HQ Player).

The iMac is connected to a DAC - Black Hole 2 (from La Rosita) - via a USB cable; which then runs to a preamp (via RCA) and then to the amplifiers.

The iMac serves (i) as a juke box, but not as a server (I do not network my music to any other device), and (ii) to back-up and update my iPhone and iPad.

I spent several hours re-merging albums which had been split in two - so now, everything seems back to normal.

Curiously, when (in iTunes) I changed the cover art of an album for a better cover (which I find using Google), the album appeared spli in two again - an easy fix because I just had to edit/merge (again) … but Roon never did that before.

addendum: my Roon core is resident on my iMac (so I was affected by the Catalina upgrade) - is this set-up fine going forward or should I consider purchasing a SONICTRANSPORTER I5 CDR which would host Roon? This product is interesting to me because it is rack mountable …

Curiously, when (in iTunes) I changed the cover art of an album for a better cover (which I find using Google), the album appeared spli in two again - an easy fix because I just had to edit/merge (again) … but Roon never did that before.

Does this happen every time? Could you share some screenshots of this happening? Ideally, we’d want to see the following screenshots:

should I consider purchasing a SONICTRANSPORTER I5 CDR which would host Roon? This product is interesting to me because it is rack mountable …

I think it’s save to assume that you’re already considering a change of your current setup or you wouldn’t have asked for others opinions.

If you need/want full control over the software you can buy a server (eg. from Dell) or a barebone (eg. from Super Micro). If you don’t want to get too involved with OS/Setup you can also buy a rack-mount NAS (eg. from QNAP). Such a solution can be very flexible and serve different needs besides being a Roon/Audio server. If you just want a Roon/Audio server go for a NUC + ROCK or sonicTransporter and the likes.
What to choose depends on your needs which you haven’t shared with the community so far (besides your wish for a rack-mountable solution [and the possibility to run a Roon Core on it of course]).

Yes it happens every time.

For example, I changed the cover art of the album Rush - Vapor Trails in iTunes, and (when I returned to Roon) the album was split into two albums instead of one.

The split is always the same, one album with one (the first) song, and the other with the rest of the songs. 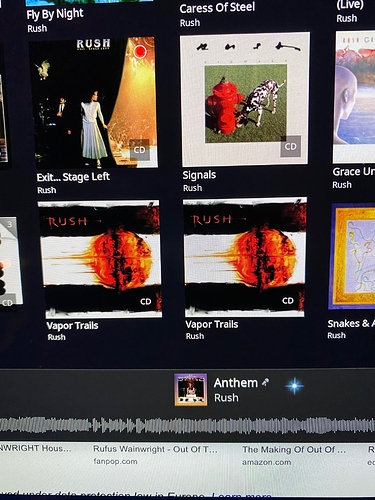 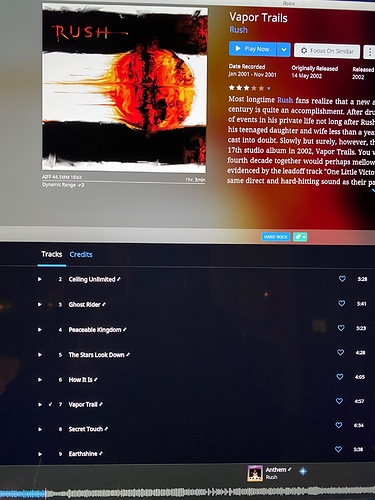 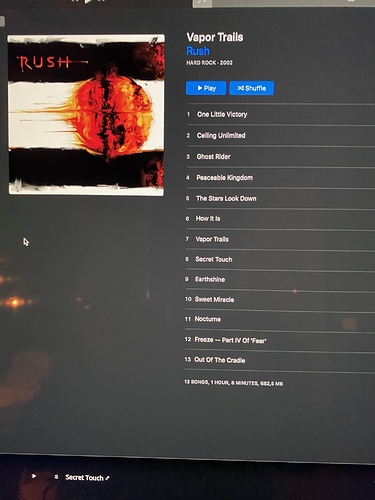 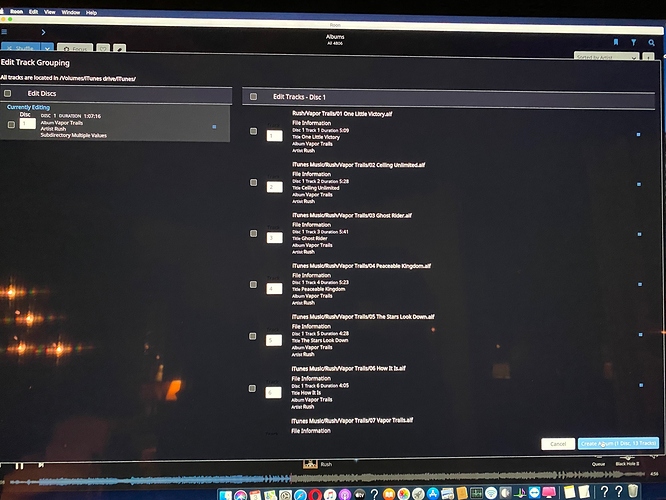 As for your questions:

I think the next step here is to enable diagnostics. First, I’m hoping you can do the following:

Respond with the album name, screenshots, and the time in your local timezone that you open Roon and navigate to the album and we will enable diagnostics for this incident so the team can take a closer look.