Bach Balk is causing large problems in my library

The album in question is one of dozens which are causing large problems in my library. It is “Six Sonatas Op. 12…” by Jean Baptiste Brevel, a TIDAL selection imported into my library.

This six-disc album does not have a single composition that is IDed. This is not altogether surprising since Breval is an edge composer (no offense to Breval fans).

But what is surprising is that ALL of its compositions appear on the Composition page filtered by the inestimable Johann Sebastian Bach (!) In other words, Roon thinks these six compositions were written by Bach. 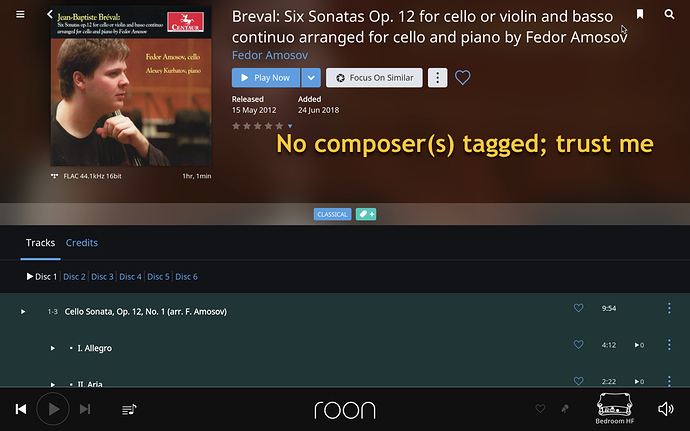 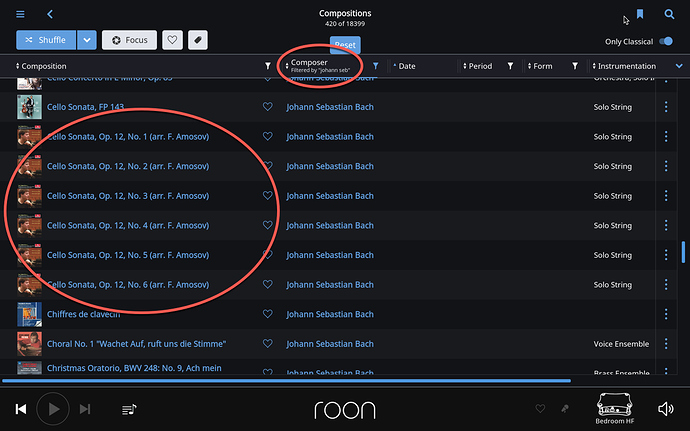 I have hand checked all visible tags and cannot find any Bach links.

There are about 200 such composition mysteries under the JS Bach composer. I am documenting this now before I rescan my library. Maybe that will remove the confusion.

Is anyone else experiencing similar issues? One tentative common thread among the other Bach misfit albums is that: each comp has no composer tag; and each is a TIDAL import.

Is anyone else experiencing similar issues?

To check out Breval, I added the referenced album to my library. It come over as 6 separate discs, which I merged into 1. However, when I bring up the Composition screen, none of the compositions in this release are listed, neither under Breval nor under Bach; which is what I would expect since there is no composer or composition information.

It is curious, and more worrisome, that our libraries are having such dissimilar results doing essentially the same thing.

@Rugby , thanks for the parallel test. I have since discovered what I think is a pattern. Namely, Bach appears as the composer on many compositions where there is No composer tag or edit.

Is there any way, @support ,to bulk unlink Bach’s name with such “non-composer” compositions? Can I change it to “Unnamed” or better, null?

The team took a look at this and, as Daniel found, we were not able to replicate this.

So we can better understand why you’re seeing things differently I have enabled diagnostics on your account. The next time the your Core is active the report will be uploaded to us. I’ll pass it along to the team from there and will be sure to update you on their findings.