Core Machine (Operating system/System info/Roon build number)
I’m using a Nucleus with a 2TB drive purchased from Roon, and my files are in the Data folder on Roon version 1.8 Build 778.

Network Details (Including networking gear model/manufacturer and if on WiFi/Ethernet)
The Nucleus is wired by Cat 6 to a Mac Pro Desktop (macOS Big Sur 11.2.3) using a Ubiquiti network controller and switch.

Audio Devices (Specify what device you’re using and its connection type - USB/HDMI/etc.)
Blusound Node 2i wired into the Ubiquiti network.

Description Of Issue
What is the easiest way to periodically backup my music files in the Nucleus Data folder to Dropbox or the hard drive of the Mac Pro Desktop?

You’re going to need to run a backup program from another computer. If by chance you use Macs as I do, I’ve used Chronosync (https://www.econtechnologies.com/) for over a decade (of course only the last few with my Nucleus+). Great software with continuous upgrades and improvements. I actually store the master copy of my music on a Mac and I’ll do meta data editing there if I need to. Then I use chronosync to sync the MAC master to my Nucleus+ SSD and an additional backup on my NAS. Of course you can go the other direction to backup from your Nucleus if that is your master. If you’re not using Macs, there are countless programs you can use from Windows and Linux machines but someone else will need to recommend.

VERY helpful Craig. We do use Macs. Many thanks, Joe.

Craig - If I can impose another question: How do you form your network share address or folder address to direct your Nucleus to use a folder on your Mac? I’m having NO luck. Many thanks, Joe

Hmm. First step is to make sure you can get to the right target directory on your Nucleus from Network in the Finder on your Mac. You’ll want to connect as “Guest”. If you can get to it from there, then Chronosync can get to it (I’m assuming that’s what you’re trying).

Then select the “Operation” in the middle of the window. I do a a “Mirror Left-to-RIght” and select “Synchronize Deletions.”

Then choose your target directory on the Nuclues by selecting “Choose” in the “Destination Target” side of the window. Should be able to select the right directory just like you were able to do from the Mac Finder. Then Select Options on the “Target Side”. Check the box for “Attempt to mount server”. Then check the box for “Login as:” and fill in “guest” for “Username:” Then save your work and and you should be able to see if everything is working by clicking on the big left to right arrow in the middle of the Chronosync window.

For reference, here’s what my Chronosync synchronizer window looks like: 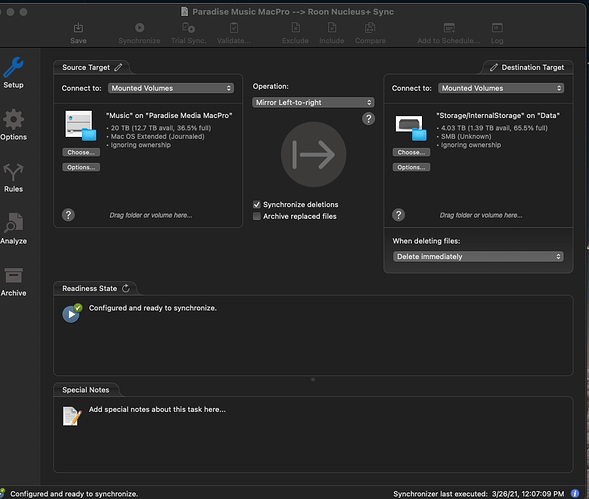 And here’s what the option window looks like when selected on the “Destination Target” side of the window. 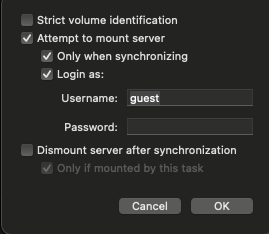 Once you get this working, then you can set a schedule for this syncrhonization in Chronosync. Hope this all helps…

Thanks Craig, looks to be an elegant solution.

It IS an elegant solution, Craig. AND your explanation of how to set up ChronoSync was clear and worked perfectly for me.

Can ask if have your Nucleus playing from the music files in the onboard Data file or from the master file on your Mac?

My Nucleus+ is playing music from my internal (added) SSD in my Nucleus+. Always want to play the files local to the Nucleus IMHO. Makes things simpler and faster by taking a variable out of the Roon play equation.

Makes sense to me, Craig. Many thanks. Joe

Craig - It occurs to me that there might be a problem with playing from the Nucleus and backing up from your Mac: When I select albums or tracks that I am going to be playing fairly often from one of the music Services, I “Add to Library”. As you know, this means that Focus takes that album into account in calculating my musical taste and the music is also analyzed for DSP. I think it also puts a pointer to the file in, say, Qobuz in the Library for quick retrieval. The “Library” in this case is on the Nucleus (as far as Roon knows), so that’s where all this info is placed.
However, when I then backup from my music file master folder on my Mac, doesn’t that wipe out the “Library” entries on the Nucleus?
Maybe the Roon monitor could comment on this as well?
Many thanks, Joe

Makes things simpler and faster by taking a variable out of the Roon play equation.

Simpler yes. Faster… well sort of… you need the speed for the database search which happens on the os drive, for local files. There’s still the network contact to roon or tidal which is a big bottleneck. Gig speed internet is fast but roon isn’t going to saturate your gig speed connection. A benefit from speed on the drive you have your tracks on is when you initially copy the tracks to the drive and maybe a little bit during the audio analysis. Otherwise that drive will probably never require more than 4-6mb/sec and that is for higher dsd rates. Most audio streams are easily under 2-3mb/sec.

To put that into perspective…

So not much demand happening with the drive containing the audio tracks.

You’re also ignoring what other traffic on your network may be slowing things down.

At one time my music files being accessed by my Nucleus+ were on SSDs in a Synology DS3617xs (very fast) NAS with a 20G pipe to the switch my Nucleus+ was connected to (and my network is all enterprise class ubiquity gear). I still had occasional delays and stutters depending on what was going on with my Synology. Of course if the only thing that mattered was the SSD and network speed without anything else going on, I’d never have had an issue. But that is not real world. I’ve never had a similar issue when I moved my music files to an added internal SSD on my Nucleus+.

I’ll stand by my statement that having local storage with your Nucleus for music is faster, more dependable and it is unarguably simpler.

However, when I then backup from my music file master folder on my Mac, doesn’t that wipe out the “Library” entries on the Nucleus?

The data Roon creates when analyzing your music and the music that you’ve integrated with qobuz and/or tidal will not be stored in the same directory as your music files (unless you’ve put your music files in the wrong place in the SSD that comes with a Nucleus. That’s a no no.). So no, a Chronosync mirror backup of your music from a mac to the nucleus’ local music storage doesn’t “wipe out” this data on your system.

Thanks, Craig. Again, that makes sense to me. There is, after all, a separate backup for all that metadata.