I’m also backing up to a usb stick attached to my nuc running ROCK. This back ups is really slow and causes music dropouts.
@support is this to be expected?

Here’s my set up 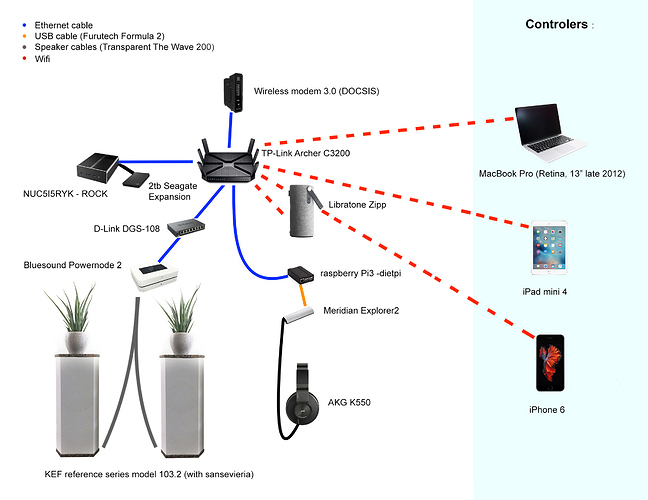 Roon databases are comprised of (tens or hundreds of) thousands of very small files. The write performance of most USB sticks is abysmal. The combination of both is a recipe for disaster.

In short: do not use USB sticks for backups.

Hmm lets hope the icloud backup way keeps working then as It seems the free dropbox option no longer holds my db.
Is a usb stick backup only very slow (it’s scheduled to run at night so this is not that important) or is it prone to corruption?

I have just installed a Samsung USB 3.0 64 Gb stick directly attached to my ROCK NUC 5i5 to use specifically for backups. My library has 20 odd thousand tracks (about 1700 ripped physical albums stored on the NUC, plus Tidal albums added to library). The backup took less than a minute and is just over 16 Gb in size. Doesn’t seem bad.

Based on personal, anecdotal experience, I strongly recommend having a local backup in addition to your iCloud backup — an inexpensive USB spinning HD should be fine for the purpose.

I recently had an issue with server-side corruption of my iCloud Drive that took literally weeks and numerous calls and escalations to work out with Apple tech support. In the end, no data was lost and my iCloud Drive is back in service, but if any “primary” storage had failed during the iCloud outage and what was on the iCloud Drive had been the only backup, it would have been bad news.

I’m also backing up to a usb stick attached to my nuc running ROCK. This back ups is really slow and causes music dropouts.

This isn’t expected. Most likely, something about this USB stick is interacting poorly with the NUC, whether due to the USB stick, the port, or the drivers.

I would try a different port or even better, a different flash drive. You could also try backing up to a different drive – the media drive, a network folder, etc. The goal is to separate the backup process from this specific drive, which may be hanging the system for some reason.