Backup is taking a long time + path for backup

I recently migrated my Roon core to from my MacBook Pro to a Roon Nucleus, which is connected by Ethernet. That part is generally working well, except for regrouping a few box sets from files that got separated into individual albums during the migration. The issue regards backing up the Roon Database, which previously was saved in a Desktop folder. Backup took a few minutes. Now, it backs up to the Dropbox but it takes about an hour. Is that strange? Also, I would appreciate help in understanding how I might set up backup to a USB drive connected to the Nucleus or a folder on the MacBook. What would the path for those be?

Dropbox backup is constrained by your upload speed. An hour is not unusual. Set it for 3am and let it happen automatically.

You should see a USB drive on the Nucleus as an available backup location in Settings/Backups/Scheduled Backups/Add/Backup Location/Browse.

If you make the folder on your MBP a network share, it should show up there also.

Great. thanks much. The USB Drive showed up as soon as I plugged it into the Nucleus and was very easy to schedule (and then reschedule the dropbox for the middle of the night). 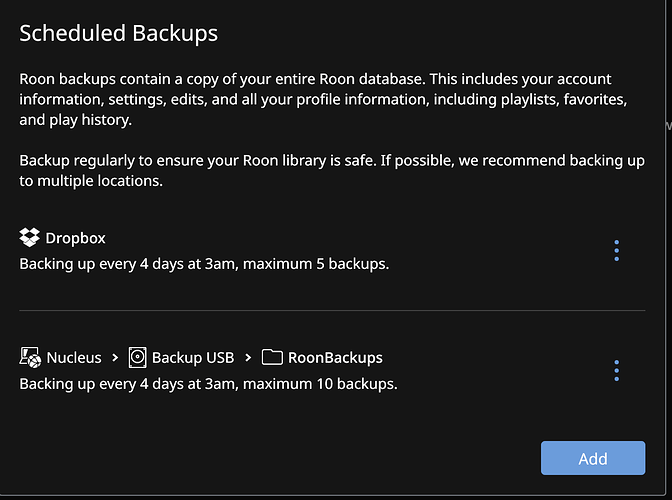 You can never be too handsome, too rich or have too many Backups.