I am pleased that Roon now includes a Backup option. That was a necessity given how large some of your user’s databases are.

I want to add a backup location to an iMac external drive on the network that has a lot of space (on a USB drive that is plugged into the computer). Not sure how to specify this location. Various attempts have not yielded an acceptable Network Share location for the Backup option.

Hi @Daniel_Greenberg ----- Thank you for the report. Not sure if you have checked out our knowledgeBase yet but it contains good documentation on how to schedule Backups using this new feature in Roon, which can be found here.

May I ask you to please give this article a read and if further assistance is needed I will be glad to lend a hand.

@Eric - I just wonder whether it should be made clearer in that KB article that the Roon database does NOT contain the music media files themselves. I suspect that some people might confuse the two, and then be in for a nasty surpise when disaster strikes…

Yes, I think that that should be spelled out as well as one should choose an alternate location and not your music folder for the backup location.

Thanks for your response. I have now read the referenced article, but am in the same place. Not sure how I specify alternative network locations where there may be available space that are not part of the machine/drive where Roon resides along with the media files. 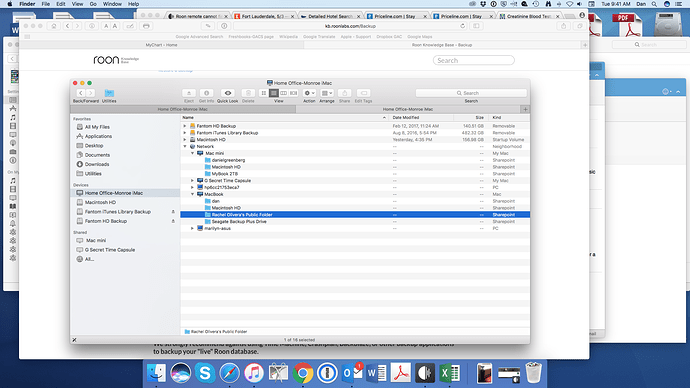 In the scene shot above, Roon and the media files resides on a machine called Mac Mini MyBook 2TB. (located in my basement Media Room.) So that is the main location as far as this discussion. I want to have backups done to alternative locations such as iMac Fantom HD Backup which is in my home office and connected to an iMac. There is room on this partition as not much else there. So without going to Dropbox (which I have also set up), I do not need an internet connection to restore from this Fantom HD Drive location.

When I try to schedule backups in Roon 1.3 using these alternative locations, they do not appear as an option to select and schedule. I am asking how I specify them.

Here is what the backup screen looks like. So yes, Dropbox is there and the drive where Roon resides in my basement. But that is the issue. I do not want backups on the local drive in case it fails. I want to go to other locations on the home network, especially the USB drive attached to my iMac which does not show. 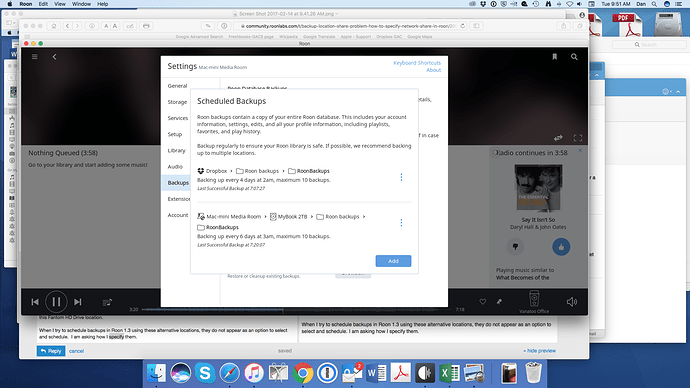 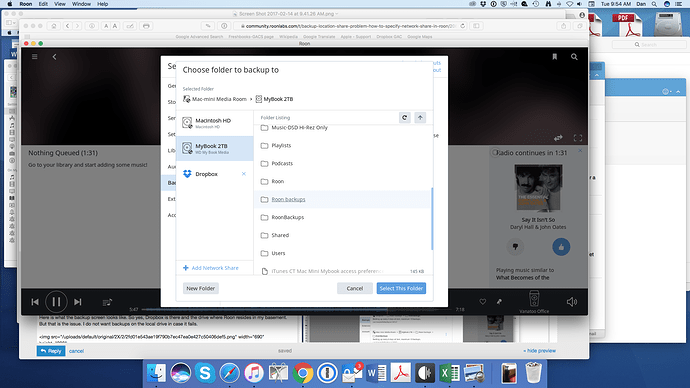 So my question is how do I specify these other locations on my home network that do not show in Roon? They show in Finder (in Mac OS), but I do not know how to specify as a backup location in Roon.

Er, why don’t you click on the “+ Add Network Drive” text shown in the screen? That opens up a window where you can define a network location…

When I select “Add a location” for the backups, the correct network drives (all the other machines on my home network) are not shown. There is a space to designate a “network share” . T

The various entries I have made to designate that location are not accepted. So I am asking for the specification to designate network share, and an alternative location. In simple terms, how do I see the rest of the network in this backup screen to set a location? Alternatively, where do I find a knowledge base resource that addresses this issue.

Roon only is seeing the drives on or attached to the machine that Roon is running on (in basement Media Room) plus Dropbox. It is not seeing the rest of the network in the house. What am I missing? 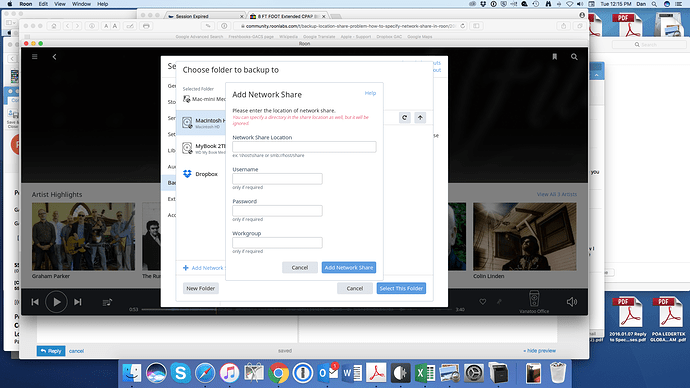 I recognize this is a new feature, and a valuable one. So how do I set this up to forget it. Most of my available network drive space is attached to other machines on my home network. How so I see those locations???

Well, I live in the Windows world, so we might do things differently from you folks over in Mac land, but in my world, I have a number of computers on the home network that may share one or more folders as a network share. So, for example, I have the following computers that at this moment happen to be visible on the network: 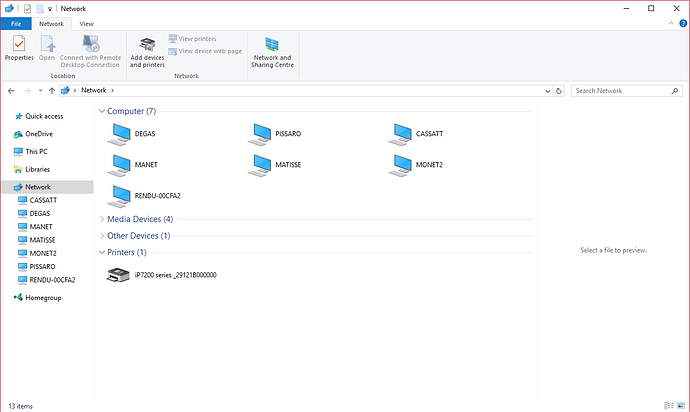 On the Pissaro computer, I have defined the Music folder to be a folder that is shared across the network, so it’s visible from other computers: 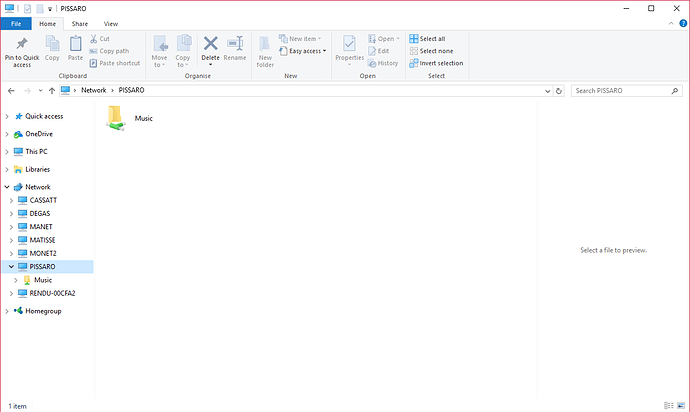 That means that if I want to add this network share to the Roon Core, I just add it using the “+ Add Network Share” screen and give the network address of the shared folder (\\Pissaro\Music in Windows-speak), plus the Windows credentials needed to access the folder. It then gets added as a network share: 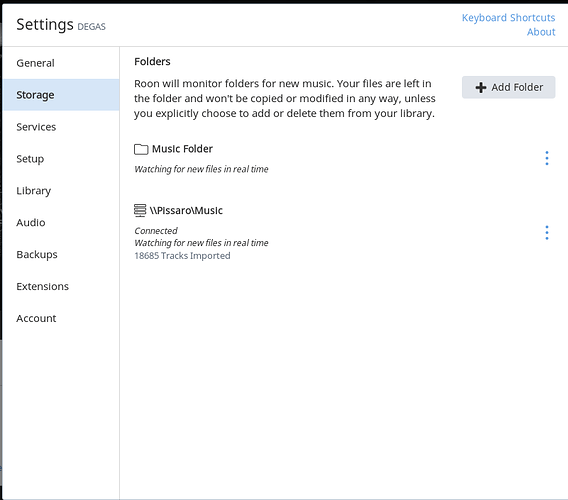 I’m not sure what you mean when you write: “The various entries I have made to designate that location are not accepted.” It sounds as though you are not defining network locations correctly, so that they can’t be added. Perhaps you could give an example of what you’ve tried, and someone who is familiar with the naming of Mac network shares could comment…

Geoff: Yes, you are correct. The network shares I am defining are not recognized as a valid backup location. So I am asking where this is documented? It is not obvious as to what it should be. And why do the network locations not show up so I can pick one? And how they defined?

the examples given for the Network Share are worthless relative to what I am seeing on my screen as network locations. Seriously, this cannot be for a non-IT person to digest. 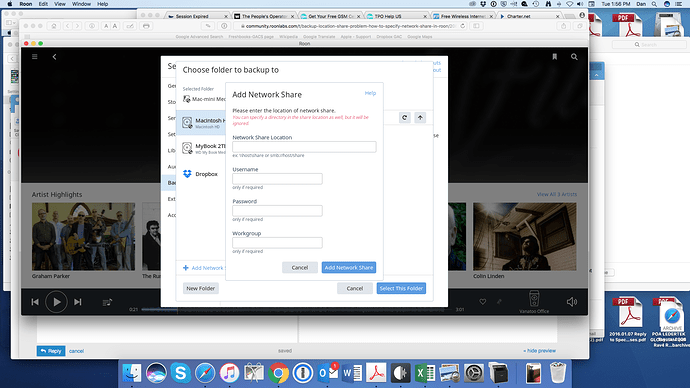 So just how are you defining them? Please give an example.

The method of adding shares using a network path is defined in the User Guide. Here, the Mac way of defining a network share is given as the example of smb://MyNASDrive/Multimedia/Music.

So, if you had a Mac that had the name MySecondMac, and it had a shared folder called Music, then it would be accessed by defining the network path to the music folder as: smb://MySecondMac/Music

There is no full-blown Finder or Windows Explorer inside of Roon, network shares need to be added as pathnames. I’m not familiar with Finder, but in Windows, I can always use the Windows Explorer to browse my network, and then just copy the pathname that I want to add to Roon from the Explorer: 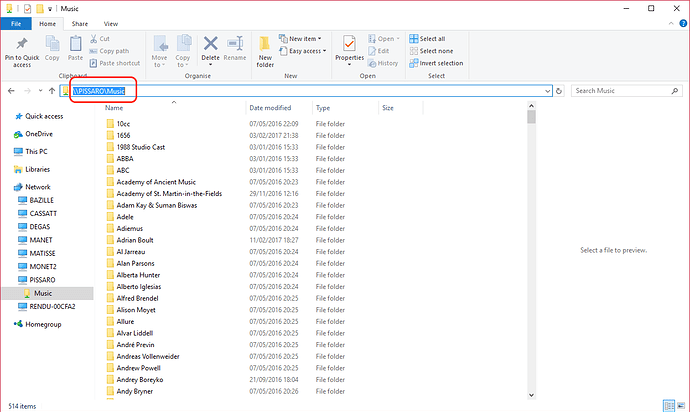 Also, does the USB drive need to be setup as a shared drive?

Probably does. The library is shared in iTunes (I realize this is not in Roon), but probably have to share as a network drive, even though other computers here can generally see it. Will research and update my posting.

I’m a Windows guy, but if you go to the mac mini running Roon (not in Roon but… Finder?) and try to access the USB drive on the other machine can you do it? If so, is there an option to display the Path for that machine/drive/folder. This path is what is needed to be entered in Roon.

I can see the contents of each machine and each drive both internal and external to the computers on the network. ( I only looked at the Apple machines, as other then my wife, I do not know anyone who has a Windows machine.)

When I consult the link Daniel was kind enough to supply, I have the same problem. I really do not want to put in where the music is, but I believe rather where I want to send the backup to. You can see below that I have used Finder to find the network share specification which does not work. 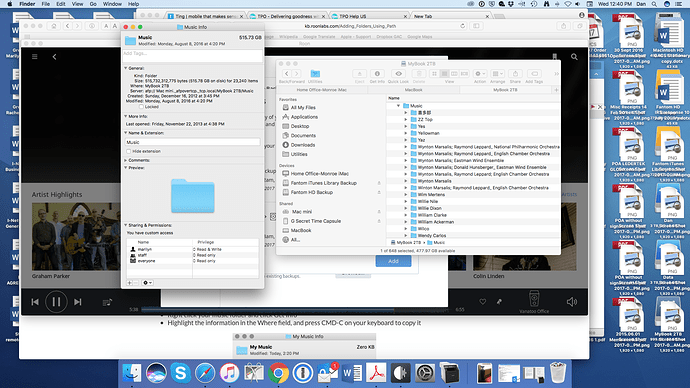 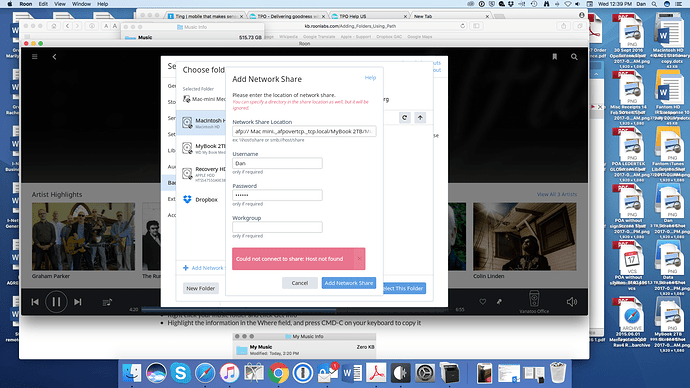 Well maybe the lightbulb has not gone on yet, but I can only save the backups to the machine where Roon is installed and Dropbox. I cannot save it to the other drives on the network that have space (usb connection for the external drives on other network computers).

I am making an inquiry about how to find the address of the target drive on the network. The address (in Finder) when I connect to Server does not show as an suitable address acceptable to Roon There are a number of vnc addresses when I try to connect to server, but not clear on what my be applicable.

Thoughts? This cannot be that complicated.

Well, now that I see your path name, I think that AFP is not supported in Roon you have to use SMB.

Well, exactly - Apple views AFP as a legacy protocol, and has implemented support for SMB, which is why the Roon User Guide says to use SMB.

So you need to create a home folder to hold your backups.For example, on a Mac (let’s call it Mac2), which has an external USB drive (Let’s call it MyBook 2TB) attached to it, create a folder called Mybackups. Make that folder shareable over the network, with access by yourself (i.e. using your credentials, which is what Roon will be using).

Then in Roon, the network path will be smb://Mac2/MyBook 2TB/Mybackups

It’s really not that complicated, but it is like learning to ride a bicycle. Once you’ve mastered it, you wonder why you found it so difficult in the beginning…

As an aside, Roon has never supported AFP:

Yeah, AFP is awful and seems to be barely maintained at Apple these days. They’ve put a lot more recent effort into doing first-class SMBv2 support in the past few years, and that’s the direction where it seems they’re going. No-one should use AFP for anything, ever, if SMBv2 is an option. Apple can’t kill it because compromising backwards compatibility is nasty for them, but we can certainly eradicate it from our lives

The disappearing albums thing is an AFP bug. We’re aware of it, bu…

OK-will have to look at this when I have a clear head. Fighting a couple of work emergencies this afternoon into tomorrow.

Will consider your comments and try the suggestions. And let you know if there is success.

5 posts were split to a new topic: Specifying Backup Location on OSX via SMB