Backup onto SSD storage in Nucleus [answered: only if on usb]

Just taken delivery of a Nucleus+, and installed an SSD drive (which I happened to have spare from a previous project). I don’t need that drive for music storage and had thought to use is as one of the backup locations.

However I can’t see it offered as an option on the Settings > Backups page. Can somebody give me a steer on how to do this - or, of course, persuade me that it is an act of complete lunacy.

I believe that an internal HDD/SSD added to a Nucleus is only intended to be used for music storage - not as a location for Roon database backups.

I say this because on my NUC running ROCK, the internal HDD also does not show up as a location where backups can be located. The only locations possible are storage units connected via USB (the “New Volume” shown here), or connected via the network. An internal HDD/SSD is only available as the default “Music” folder. 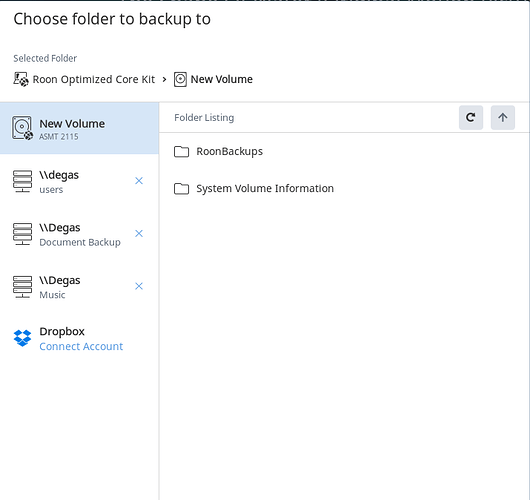 @Geoff_Coupe is correct. If you want to use a drive for non-music storage, you must attach it via USB or network share.

OK - thanks, both for prompt responses. Agree with the sense of it, although, since I’m holding a backup on a NAS as well, it isn’t entirely illogical to have one local to the core…