Best Linux to replace ROCK on a NUC

can anyone recommend a small, fast and easy to maintain Linux (or other Unix) to replace my ROCK installation on my Intel NUC7i3BNH.

Why I want to do this?

I’ve found that Arch Linux has a small footprint but is not easy to setup. So maybe the Arch based Manjaro could be an option if it is still smaller than UbuntuServer. Sorry, I’m a total Linux noob, but I don’t want to buy Windows and the ROCK shows, that Linux works well.

As I don’t own a display (I only have an iMac) the Linux should be maintained headless after setup. I thought about buying a touch screen, but as I understand it right, Roon doesn’t provide a GUI on Linux.

Thanks in advance for some hints

A quick question. What is your overall rationale for a small footprint? I ask because what would be more important to me would be support for the foreseeable future and the ability to do what you want as priorities. It may take something with a bigger footprint to do all of that. There is no free lunch. Lightweight and single mindedly in function or a little more rotund but with the ability to do the things you need.

One question. If the NUC is turned of after 15 minutes of not being used how will it turn back on? Wake onLan?

This is something I am thinking about too. I understand that rock is what it is but it annoys me that I have a box sitting there doing nothing until the kids go to bed. I am currently running hqplayer on a separate box with an archLinux install called audiolinux: http://www.tophifi.it/ on it. This is working well and I will likely keep the hardware as it is but Im considering binning rock and running roon server on the Nuc under audio Linux.

I’ve nothing to do with the company but have been impressed with product and the level of support i’ve Received has been excellent. I’m not a Linux noob but no expert either.

You can run it headless, from ram etc…lots of config operations and NoMachine is pre-installed. It’s very quick to get up and running.

I recommend Vortexbox OS its designed for Audio so no Graphical interface but has a simple web GUI. Used it for years.

A quick question. What is your overall rationale for a small footprint?

My reference is ROCK. The NUC consumes 18 Watt when idle. The new setup shouldn’t consume much more. I don’t know what would increase the power usage in Linux. Maybe GUI and unused background services.

One question. If the NUC is turned of after 15 minutes of not being used how will it turn back on? Wake onLan?

I will switch on the NUC.

Most times I only turn on my NUC once or twice a day (morning/evening) but stopping listening is not predictable. It could be a phone call or when I fall asleep until the album is over.

@crom and @CrystalGipsy thanks for your tips. I never heard of these distros and will take a closer look at them.

In the past couple of days I’ve installed Snakeoil OS (https://www.snakeoil-os.net/) which is an Ubuntu based OS.

It provides some web based admin pages and is easy to install and runs ‘headless’ after initial setup.

In that case, I highly recommend starting off with a mainstream distribution such as Ubuntu Server 16.04 or possibly 18.04.

BTW, install iTerm on the iMac for a better ssh experience with Ubuntu and tmux.

I used Arch Linux for years but could not be happier with Ubuntu Server for my audio needs.

The operating footprint is similar to a minimal Arch install and the administration burden is SO much lower. Arch Linux has package updates virtually every day. They are offered continually without explanation, leaving it to the power user to divine what is changing, what is appropriate for their uses. Further, not updating is never recommended—if you go a month without updating you may have several hundred updates waiting.

I have not used any Arch-based distributions but I assume they operate on the same rolling-release schedule. Often key versions of core software will be far ahead of the majority of mainstream distributions. What does this mean? In my experience it means difficulty in troubleshooting when issues do arise, because many developers take a more conservative approach themselves, supporting and using personally a handful of solid, standard distributions.

Ubuntu will have a steep learning curve as well but with a much more conservative update cycle and far less potential for system breakage.

To me the benefit of a bog standard install of something like Ubuntu Server is everything about it has been vetted by a massive team. Hobbyist versions of the major distributions, imho, don’t inspire the same confidence.

Agreed on not using a rolling release for server duties (that said, I run Arch on my Core NUC, but I’m nuts).

In the use case at hand, I’d use a minimal Debian install. It’s rock stable (pun intended), maintains a conservative release cycle and is the actual foundation many other distributions (Ubuntu included) build on.

To add to the conversation, if you go with Ubuntu, choose the ‘Long Term Support’ (LTS) version. This will limit the hassles of underlying linux things changing for a a few years (5 for the server).

I have had good results using Ubuntu for the roon core.

Love the look of snakeoil distro!

Yes, Arch Linux is a world away from centos and ubuntu where I at least have a little knowledge. I managed to completely bork my audiolinux install install by trying to do a kernel update and restarting before I copied the files needed to boot from into the right folders…nothing like the pretty seamless ubuntu experience. However, the fact that the OS is completely set up with roon server and hqplayer, just ready to be turned on meant that I just wiped the disk and started again. Music was playing 5 minutes after the image had unzipped onto the SSD.

Now I need to install RoonBridge for Linux I assume from command line. Wish me luck…and yes I don’t want server I want Bridge

Update that wasn’t too hard…Just need to connect it up to a DAC now and maybe find a nice LMPS for the system to run off. 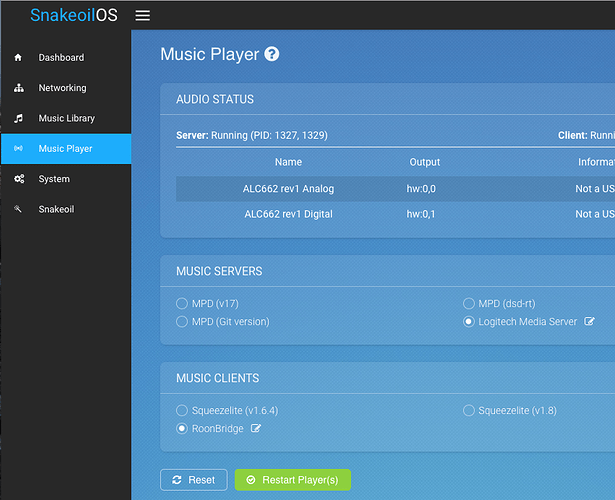 Hi all and thanks for your input. Good point about the rolling releases. By looking at VortexBox there is another point: Some special audio distris are outdated nowadays. So Ubuntu Server could be a good choice. Well, I don’t like the behavior of Canonical but hell, I’m also using apple products.

imho there’s no need to look for an ‘audio specific’ linux distro: you’re running Roon server, nothing else.
So either take a Fedora or (a little bit of an outsider) openSUSE. The latter is reasonably ‘friendly’ for people that don’t have that much experience with Linux, but it on the other hand very complete.

Tangentially related question to the one in this thread…

I have a few laptops that I travel with (not at the same time).

I’d like to install RoonServer onto a distro fully contained on a USB (so no user files on HDD). No need for DE or WM - in fact not having to worry about display drivers would be a bonus. But having good wired/wireless is needed. Given the architectures I guess something that supports BIOS and EFI would be good. Security would be important - I’ll often be in hotels with public wifi. I’ll probably disable ssh. No need for music library - I’ll use it for streaming (and won’t bother too much with backup / restore of database).

Why go to the effort of installing RoonServer and stream? Why not use Tidal / Qobuz etc? Well the DAC I am travelling with is the Chord Mojo + Poly and I use Android. Which means that changing from Roon to other streaming on the Poly is a pain in the finger (insert pin, create hotspot, connect to hotspot, change connectivity, disable hotspot…). I use the Poly and Mojo at home too… so leaving it set to Roon is a plus.

So… maybe a crazy idea. Maybe a hammer to crack a nut. But it’ll be fun anyway. The idea is having a mobile / portable core (rather than lugging the NUC around… which I’ve done before).

Anyone got any suggestions on Distro (or starting point - maybe a LFS or a MLL based system)?

It clearly lacks all the tweaks and tuning options in AL, but I’m not so sure that’s relevant for the server

I use AL in my endpoint though, which is a BIG upgrade over the various generic Linux I tried

I first installed Debian Stretch (Headless Server version) on my NUC and then installed @jussi_laako’s custom low latency kernel (linux image and headers) on my NUC-i7.