Jumping over from the other thread (this one seems more on topic), I don’t have experience with the Gustard, but since I have an ESS-based DSD256-capable DAC and you mentioned in the other thread that you use HQPlayer, I’ll just say that I’m very, very happy with the sound I’m getting upsampling everything to DSD256 in HQP using the DSD7 256+fs modulator. I favor HQP’s poly-sinc-short filters, “-mp” for most stuff but the linear-phase variant for large ensembles (for me that’s orchestras and big bands).

Note that these settings will take a fair bit of horsepower on the computer HQP’s running on. If you try them and experience any stuttering or dropouts, you could try dropping back to the DSD5v2 256+fs modulator and/or the “-2s” variants of the filters and see if that works better.

…
Note that these settings will take a fair bit of horsepower on the computer HQP’s running on. If you try them and experience any stuttering or dropouts, you could try dropping back to the DSD5v2 256+fs modulator and/or the “-2s” variants of the filters and see if that works better.

Hi David,
Interested in your feedback using Roon > HQP > DSD DAC
About required horsepower what cpu / gpu / cuda do you use and what are the metrics when upsampling to DSD256 from redbook PCM ?

About required horsepower what processor do you use and what are the metrics when upsampling to DSD256 from redbook PCM ?

I’m away from home now, so I can’t be as precise as I’d like, but I have HQP running on a “loaded” current-model iMac with an i7 6700K. This machine has no problem whatsoever with the upsampling. I don’t think CPU usage ever goes above 25% when only HQP is in use, and I’m frequently doing other (relatively light) tasks on this computer while music is playing, with no problems. Let me know if you want me to be more precise about this, and I can give you better numbers when I get home this evening. No CUDA offloading on this machine.

I think one could likely get away with a lesser i7 for DSD256 upsampling, but I can’t say precisely which one. Pretty obviously. the OS is a factor, and I have the impression that (DAC compatibility issues aside) a well-chosen Linux build would be optimal if all one wanted to do was run HQP.

I also have a mid-2011 i5-based (2415M, I think) Mac mini that I used to run HQP on (it now runs Roon Core only), and I know that that machine can not upsample to DSD256. It can do DSD128 with both HQP and Roon Core running, but very little additional activity (copying files, tagging) will yield some stuttering.

I was looking at just this setup for a while, but I chickened out and went for the less fiddly exaSound gear instead. For DSD512, I think you want i7 6700K (or better) and CUDA offload.

Around here, @andybob seems like he’s got the DSD512 thing under control (with a Holo Spring DAC).

Yea I tried that and my PC doesn’t have the HP for that. Time to upgrade the PC now…damn audio bug!

The most I can get out of my Quad Core II is PCM 384K, I know terrible right…

For up sampling to DSD256 here is a screen shot on HQP settings. Depending on your PCs power you can try different filters (I usually prefer the MP variants) and even different modulators. My favorite filters are the poly since shown in the screen shot and the new XTR-MP 2s filter. If you want DSD make sure on HQP’s main screen it says SDM in the drop down box under the round volume knob. 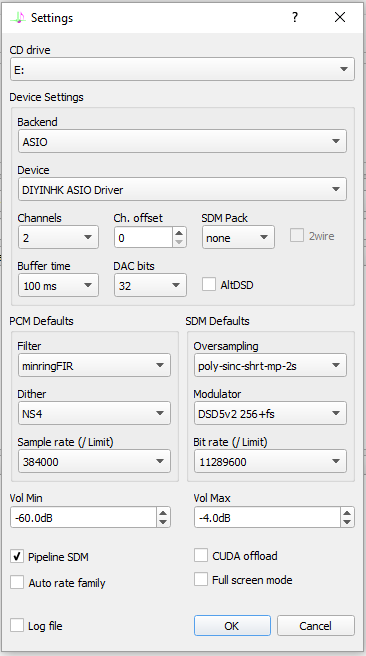 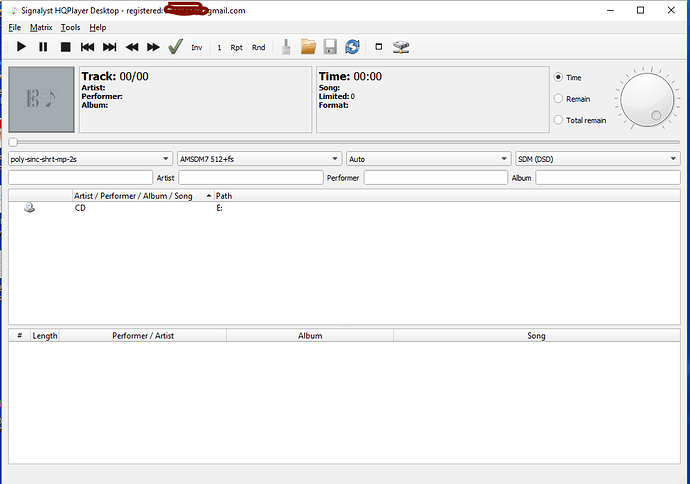 I was following your post on AC and tried setting mine up like yours. However I can’t get DSD in the drop down unless I enable SDM Pack set to DoP.

My PC is an older Dell Optiplex 760 Quad Core and it can’t do DSD I’ve found out. It drops out and echo’s even on DSD64 through HQP. I figured I’m hosed until I replace my PC with i7 7700.

Do you have a custom driver fro your X20? I’m using the Xmos 3.34 driver on Win 10 Pro. If you got any suggestions let me know! Thanks! Ben 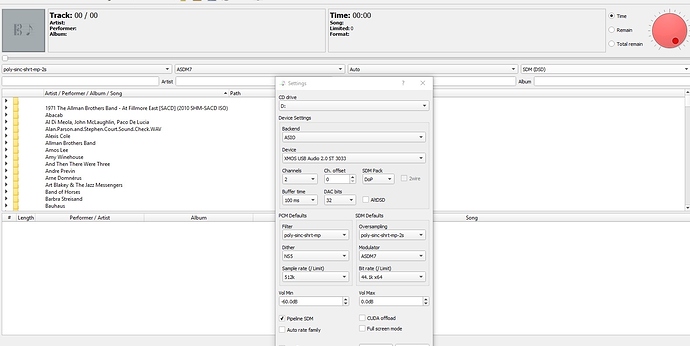 Ben, Since I have a third party USB card I do use another driver, but before I got the third party USB card I used the 3.34 version, same that you have. It will support up to DSD512, but your USB card will only do 256. Bummer on the PC, but I was able to get SDM on the main HQP page with None selected in the SDM pack box, but I also had a i7-4790K at the time. Still it shouldn’t matter. Not sure why you can’t get it with None set on the setting page, DoP is still DSD but as you state your machine can’t do it.

Can you upsample PCM to 352 or 384? use my settings on the left, I really liked those for PCM and of course on the main page make sure it says PCM. Leave SDM pack to none.

Yea it’s weird that I can’t get DSD without DoP selected. Maybe HQP detects my CPU?

I can however up-sample to 384k with PCM selected and sounds pretty good. I got to figure out the DSD thing or it will drive me nuts. I may send a note to Jussi and see if he can help. I’ll keep you posted!

Ok so I contacted Jussi and he said that if I select none in SDM pack and DSD disappears from the main screen that the driver does not support native DSD playback. I thought you said before that you used the same driver? Maybe since this is a different chip that it must use DoP?

Mine was an unsigned version of the driver I got from a chinese site, but it is V3.34. It is a theyscon driver the chinese adapted for xmos chips and products they sold. It no longer is available from that site as theyscon went after them. It definitely supports native DSD as well as DoP. Is your 3.34 the the stock driver that came with the gustard? My older x20 came with v 2.23 and was only good for DSD128.

The ESS9028 can accept native DSD as well as DoP

Yes it’s the stock driver that came on the USB drive 3.34. I even disabled Driver Signing on Win10 and still can’t get DSD unless DoP is selected. Jussi said it could be the firmware of the chip itself. Not sure what’s going on here.

Not sure either, my 3.34 could definitely play native DSD to 256 with stock USB card and native DSD512 with third party USB card.

What does your manual say for sampling rates supported?

Here’s what it says:

Do you happen to have a copy of your 3.34 drive I could try? 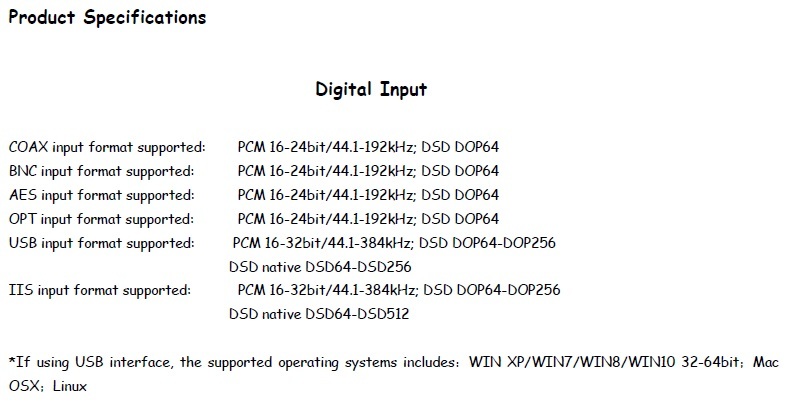 Can you PM me? if so give me your email in that and I will provide a link to driver, drivers cannot be emailed as is.

Ok so that worked! DSD in the drop down without SDM-DoP!

So maybe there’s a driver issue with the new version and HQP?

@Benjamin_Gold, @Quadman, sorry to throw a different question to your ongoing topic on DSD.

I am also using Gustard X20u Pro, do you guys get a pop noise when Gustard changing bitrate (as indicated in their display)?

When I tried to do upsamples with Roon, I will get a pop noise whenever I changed the bitrate, I found this annoying and worried that it may damage the speakers.