Best Way(s) to Organize Files, With or Without Regard to Roon

I’m looking for basic guidance as to how to organize my existing files and new CDs I’m continuing to rip. I want to be able to “see” my database (file folders) in a logical way that makes sense both for interfacing with Roon and also stand-alone because I have found trying to use the Forum or other onlines resources for this purpose very frustrating, unenlightening and confusing.

I have a broad range of music but have a concentration in jazz, jazz-“fusion,” classical and opera (which I understand have naming conventions or requirements that can differ from more standard fare).

I have the sonicTransporter AP 8TB (Roon Server) which I use as both my server and CD ripper; a series of microrendus in different rooms that “play” the files; and KEF X300A speakers. The sonicTransporter automatically rips new CDs into FLAC lossless files.

I currently have over 1,000 albums, most of which I ripped using the sonicTransporter and some downloaded (many of which are MP3/not lossless). I have “organized” them using Windows folder and file naming but I really need help understanding how they should really be organized, with strict/consistent naming conventions.

On top of that, I have found use of Roon frustrating – for example, when I delete files because I had MP3s and want to replace them with FLAC lossless files, I’d like to be able to delete (not just hide) the old Roon entries that are shown: they persist even when I’ve physically deleted the files. But please understand - this is just one of my issues – most basic is the naming (tagging?) of the physical files themselves.

There seems to be an infinite number of ways and suggested ways to go about doing this from online sources, and none of which seem to take Roon into account. And surprisingly I find very little on the Forum that speaks to my very basic concerns and needs. Everyone is so sophisticated and advanced, speaking in language that is way over my head. Frankly, I’d love to be able to hire someone (presumably a lot younger than myself - I’m 55) who could teach this to me, even remotely. Absent someone being interested in that, I’m begging to be pointed in the right direction, especially because I still have literally thousands more CDs I want to rip!

I just Rip in dBpoweramp. I fill in the gaps in data, if any as I go.
I Rip into a folder from which I transfer them to Roon.
Roon just seems to pick up on the data and identifies the albums.
Are you sure your not over complicating things.
A quick search can find anything in the folder you rip to. Roon will find anything in Roon.

This page in the Roon Knowledge base gives examples of how to organise your audio into folders and files.

Music/Artist/Album/Tracks
Where each track has both its disc number and track number in the file name.
(This is my preference.)

In addition to this some people like to keep there lossy files away from the lossless ones.
One approach is to have two separate audio libraries folder structures, say:

Rip using dbpoweramp
It will tag and file according to a template
I store all my albums under artist first name … So the top level directories are 0 -9, A, B, C…Z and all albums are filed therein.

Roon does a great job recognising your albums automagically, the key thing to bear in mind is that for multi-disc sets you either need to file each disc in its own folder named cd1, cd2 etc. or name the files discnumber-tracknumber title. 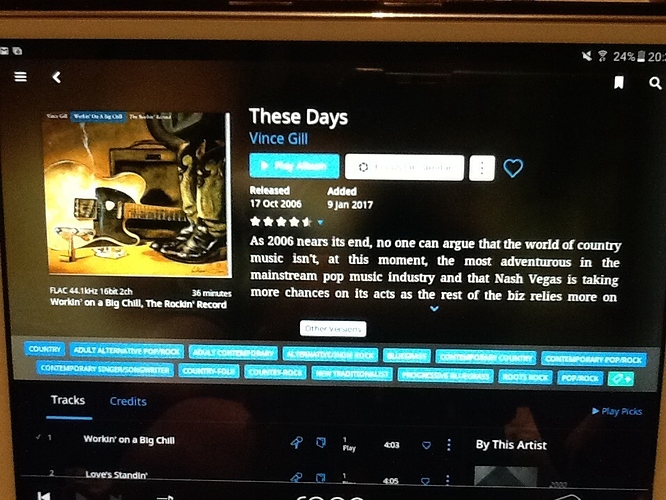 image.jpg960×720 209 KB
I recently found the fantastic Vince Gill 4 CD box set ‘These Days’ but riped them as individual albums ‘These Days’ (Album Name) with my own scans of the lovely individual cover art.
Roon calls all these albums ‘These Days’ but with the individual album name in the version box.
Roon would not pic up my art from the files though and automatically used the drab box art. (No matter what I tried) To fix this I just dragged and droped my art into Roon. The pic is of one of the albums but the layout is clear.
Perfect. Chris