In relation to metrics as referenced in my earlier post.

I believe that if ROON captured metrics it might see a business case for supporting Linux at a greater level. ROON being an audio app caters to a very large worldwide community of moderate and advance DIY’ers. Many of us enjoy the ‘hobby’ aspect of listening to audio from our computers.

With all of that said, not only the industry (see Bryston et.al.) but many audio enthusiast turn to Linux as the solution to their audio needs. Full fledged Linux support should not only be on your radar but on the front burner as a top priority.

Large audiences and economies of scale would also justify moving away from the stand alone app scheme and instead move toward a web browser UI.
Of course ROON already knows that a very large number of people are waiting at the gates for ‘any’ other music service support. Even LastFM, Shoutcast or TuneIn Radio would be enough for many to sign on and purchase the product.

Why has Linux grown and thrived in an environment were multi billion dollar cooperations live? Open source, is why, without being open source Android would not have grown as it has in such a short time. A planet full of people who have the computer skills to make most anything possible without having business or other restrictions means free product growth, increased interest and eventually value added features floating to the top. Much of what of baked into Android now, came from normal people working on a great feature which everyone liked. Being open source is the reason why Squeezebox is not only still a viable choice, but the go to choice for many and pretty much the benchmark of audio software. Without the work of Triod and other contributors Squeezebox would have faded away into nothingness. Think open source.

Is it possible for Roon to collect some or even most of this ‘error reporting data’ from within the program itself?

If there was a “Report a Problem” feature were users could use pull down menu picks ‘standardized’ to describe a problem, in addition to Roon collecting information I think the Support and problem fixing would go a lot smoother.

Not only that, but pulling data will allow Roon to build metrics which in tern could be used to better focus efforts on builds.

I believe that if ROON captured metrics it might see a business case for supporting Linux at a greater level.

Metrics aside, can you be a little more specific about what you’re looking for here in regards to Linux, @Edward?

A control interface would be a good start. Just bring it up to par with the rest.

I seem to recall there being a display implementation in earlier versions of Roon that prevented full Linux parity. Hopefully changes implemented in 1.3 sidestepped that development limitation.

Another reason why a web browser UI is the way to go…cross platform by default.

Even a VNC emulation would do it…I use VNC with Windows to Linux, its fast and you would not know the difference unless I told you.

[quote=“Edward, post:6, topic:21088”]
Another reason why a web browser UI is the way to go…cross platform by default.
[/quote]Oh but so slow.

[quote=“Edward, post:6, topic:21088”]
I don’t want to be forced to use a tablet to manage and control my musical experience.
[/quote]No one is forcing you to use a table, there are other options, just not for a Roon GUI on Linux.Whether that will change in time I do not know.

I don’t want to be forced to use a tablet to manage and control my musical experience.

I’m there, would love to be able to have a Roon client running on my desktop PC but because I’m solely a Linux user it isn’t a possibility (and probably won’t ever be). Afraid tablets is all you have, let’s hope they’re put on the same playing field as a Windows or OSX desktop soon. I’d much rather be told this is the hardware we support and these are the desktop environments you can use if you want Roon on your Linux desktop.

They must have really painted themselves into a corner and spent a ton on their current configuration. In the end, most everything boils down to money. It seems it would simply cost too much to redo everything just to include Linux.

If you look at just about every other piece of software available, being cross platform is doable…and in fact has been done. I really don’t see from a user perspective what is so different about the Roon UI that can not and is not being done elsewhere in Linux.

I think the key issue is lack of a unified desktop environment in Linux…so which does one support?

Sadly as much as we make a case for Linux and push for full Linux support I believe it will never happen.

I made my case and said what wanted to say on the subject. I think I’ll stop there before I get banned

One of the reasons why this will not happen. It might be feasible if it targets Wayland. That would only mean it takes a few years still before people can run it

While I see benefit to having the full Roon app be cross-platform (Windows, MacOS, Linux), especially as a former Linux desktop user, I suspect Roon Server is what most users would need to run on Linux. That’s my current plan—convert an older gaming PC into a Linux Roon and Plex server.

I tried Wine, but did not get it working.

What I’m using instead is VirtualBox, running Remix OS for PC, running the Roon Android app. This is a working combination although my PC can do with some extra RAM, it has only 4 GB. Assigning 1 GB to the VM doesn’t make it the most fluent experience. 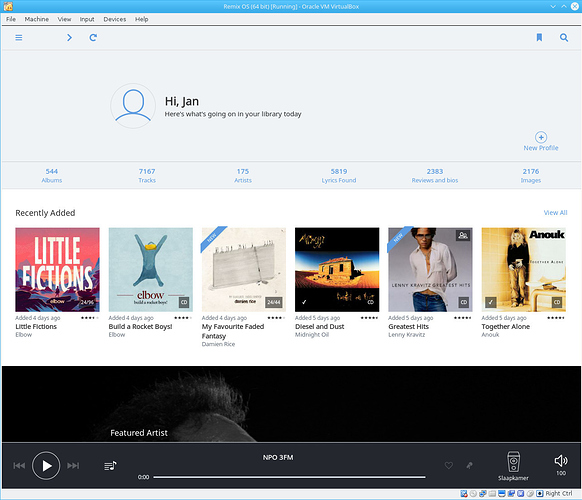 It’s a poor compromise, there’s lot the desktop apps do that the tablet apps don’t.

Can very well be. I don’t own a Windows or Mac device, so I’m having a bit of a blind spot.

I was thinking of doing the same thing, but I really didn’t want to share my OS disk space and RAM for VM if I didn’t have too…so I am keeping this as a last resort.

Hear, hear! As it happens, I’ll have Windoze around for the forseeable future (due to my very Significant Other), so this isn’t a stopper. It sure is a disappointment, though. - Jon