I am using the Window and Android controllers. On an album page, I have single-click track action set to enqueue the item clicked.

The indicator “X tracks Added to queue” is always at the bottom of the page, and it hangs around long enough so that when I’m queuing one track after another, I’m often unsure if the one I just selected is queued. I would love a colored dot or other indicator on the same line as the track, which would make things clearer. An example is below: 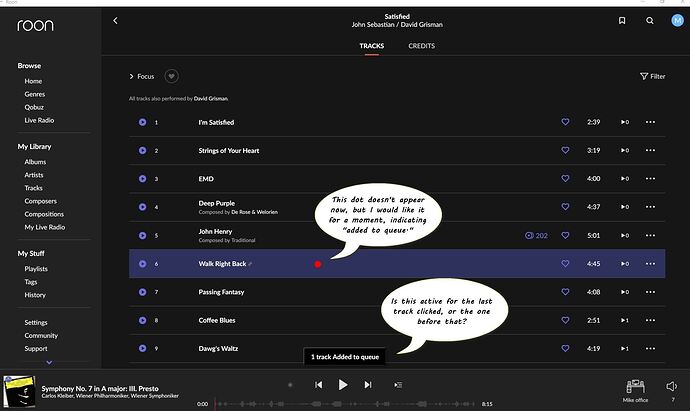 The pop up is stating that 1 track has just been added to the queue.

It does not relate to the number of tracks in totality that are in the queue.

I quite like the idea of having an “in the queue indicator, but I think it should clear once the track has been played or skipped.

Hi Carl, Thanks for the reply. Glad to hear you also think an “in queue” indicator would be helpful. I like your thought (clear it once played) better than mine (clear it after a few seconds).