I have a large library of jazz vocal albums, some modern, many classic, with obvious choices like Ella, Sarah, Dinah, Billie, with Greg Porter, Cassandra Wilson, Jose James, and many others. no matter what i play, when Radio starts, it will always, Always, ALWAYS play Tony Bennet/Lady Gaga & Michael Buble w/in the first five tracks. even after clicking thumbs down, and choosing “i don’t like this” i still get them.

i DO like Tony Bennett, but not that album. and i’d rather hear real sinatra than ersatz. anyway to block these?

Go to the album page and and click on the heart twice (see also Favorites). 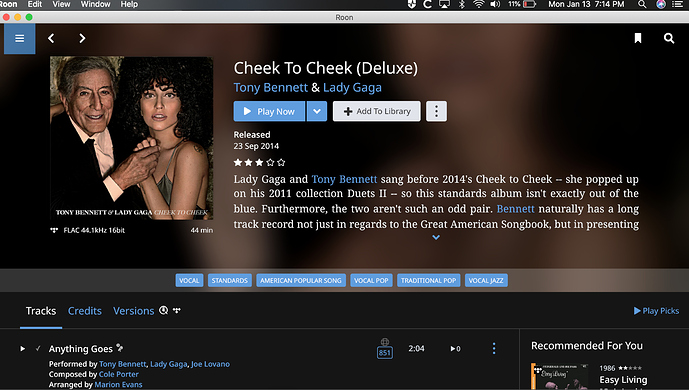 You can’t like/ban Artists, Albums, Tracks, Composers or Compositions that aren’t in your library.

Doesn’t make sens to add an album to my library just to block it.

You can also tell Roon Radio to play only content that’s in your library (see FAQ: What’s Radio and how does it work?).

yeah, but then it’s just basically “shuffle”. Radio ought to be smart enough to not play more tracks by an artist i’ve already told it i don’t like.

and for Jazz Vocal in particular, Roon seems to think it’s closer to Cabaret or Standards. after a bit of Buble, Gaga/Bennett, we get Michael Feinstein…

It’s not really like “shuffle”. I do agree that the term “radio” is potentially misleading, because it existed well before roon had tie in with any streaming providers. If you limit it to library only, it still attempts to curate and present music it feels is a fitting companion to what you just listened to. That way you could exclude anything you wish.

If you want to open it up to including streaming services as well, then that service has no real way to limit what you hear.

but roon can limit it, it just doesn’t.

If you limit it to library only, it still attempts to curate and present music it feels is a fitting companion to what you just listened to.

I think you’re overestimating Radio’s capabilities just a tad there. It really is just shuffling a subset of your library when you toggle off the streaming bit.

it shouldn’t be. Radio should be smart enough to not continually choose tracks by artists you’ve previously voted thumbs down. this is one of the limitations of a purely collaborative filtering approach, where a track’s popularity dictates whether it’s chosen. it might be popular for the roon community as a whole, but not for me. my input (thumbs down) should address this, but it’s not working.

a better approach would be to rely less on “dumb” genres and popularity, and have some actual content-to-content intelligence, which is readily available.