I’m finding the Blue Note records remasters done by APO and distributed as DSDs are fantastic. Much better than anything available in any streaming service.

Anyone else finding the same? So far my favorites are from Herbie Hancock.

Interesting. Herbie Hancock is one of my favorites. Which ones in particular from Herbie have you heard. I’d like to try one or two.

Are you referring to these? 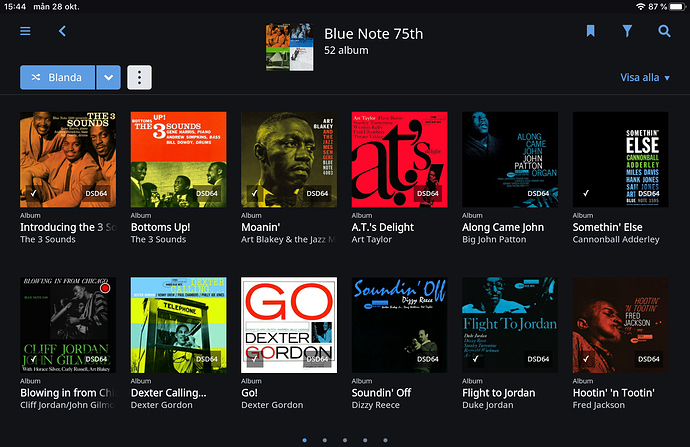 Haha, good spotting there! No, it’s actually 50, but i think i decided to tag Kind Of Blue in a SACD release like those from AP.
I’ll check, i have a list somewhere.

As it happens another DSD release had snuck it’s way into this Tag, but i tidied my mess!

My favorite is “Inventions and Dimensions” which was released more recently. “Taking Off” and “Maiden Voyage” are excellent also.

Yes but there also some recent releases. All great so far. I’m going to get each of these over time. How did you rip the SACDs?

Thanks. It was Jackie McLean - New Soil. I had it but it wasn’t on the list at Acoustic Sounds. I bought all 50 of them on SACD as you did and ripped them to my NAS. I sold all my SACDs about a year ago. I had 300. I ripped them all first.

How did you rip the SACDs?

Google is your friend. I have an Oppo player that is supported by a program that was written to support ripping. I used it to rip all my SACDs.

I have an Oppo player that is supported by a program that was written to support ripping. I used it to rip all my SACDs.

Thanks, I’ve seen the thread over at Computer Audiophile. It seemed all the devices the software worked on were discontinued. I was curious what else might be out there.

I use an old Playstation 3 with the special firmware/software. Like John, i also have ripped my SACDs a few years ago.

Some Sony Blu-Ray players allow you to rip SACDs as well, using the ISO2DSD program.

I actually use an OPPO 105 to rip SACD’s. Easy set up and works perfect.
Before that I had that famous Playstation 3.
I am still buying SACD’s. As of late new reissues from Charles Mingus.