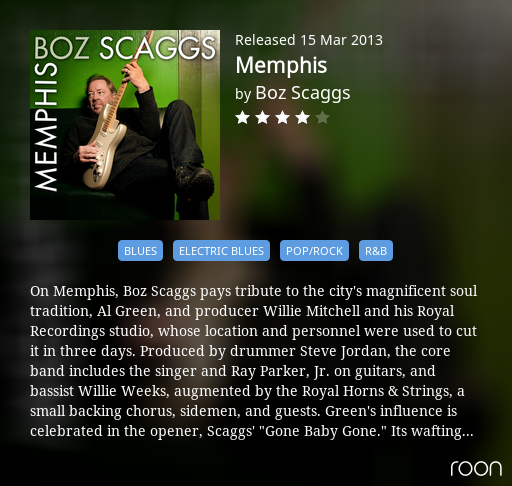 Still in my library but Tidal is no longer streaming. “This Track is not currently available in Tidal” for all tracks on both seemingly identical versions in Tidal. Is this an Australian rights issue or a Tidal glitch ?

@andybob What is the TIDAL album id for the album that you imported into Roon? (You can click on any track in the album, then View File Info --> File Tags.)

The only ID for this album currently on TIDAL in Australia is https://tidal.com/album/93013953.

Here in Memphis I see seven copies of the album and I can play six of them. I do get the “track not available” error when trying to play the sixth album.

Listening to the MQA version now.

Tidal offers me two Versions. I’ve imported both to my library, neither is MQA: 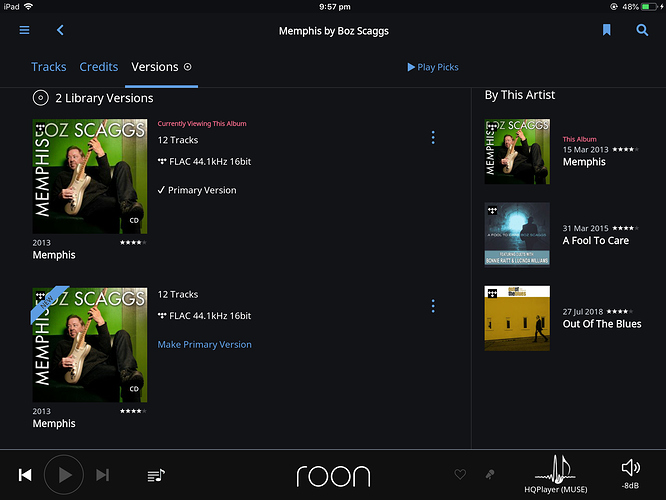 They have different TIDALALBUMID as follows: 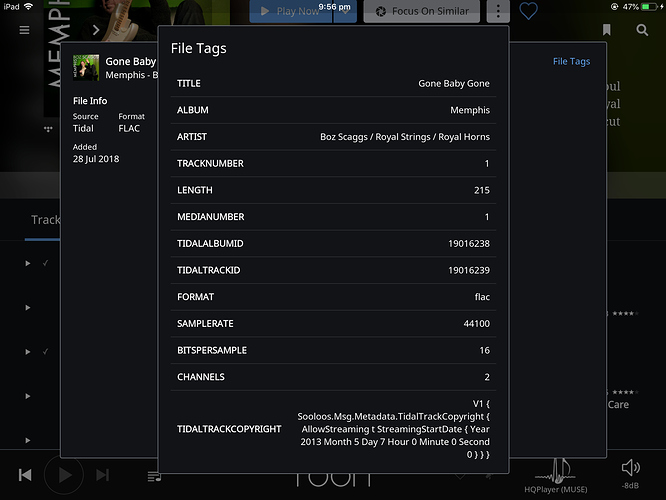 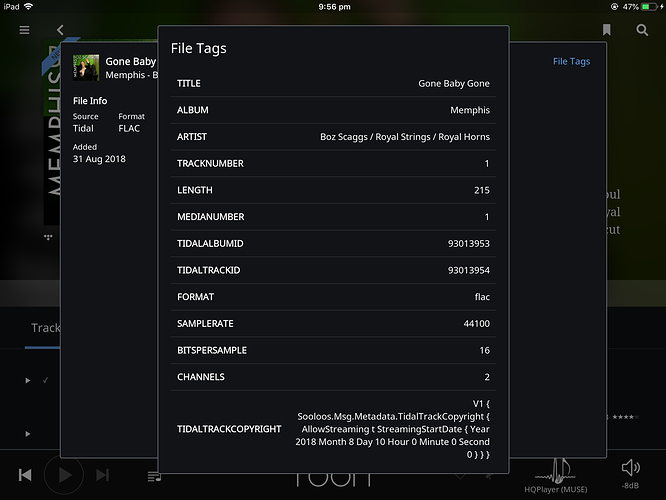 Both give the abovementioned “This Track is not currently available in Tidal” error message for all Tracks.

Here are the seven I see with the MQA version being the third:

I doubt it’s “A Memphis Thing”

Apparently we see more versions here in the US.

So it appears that, in Australia, TIDAL has removed the top album of the two (19016238). According to the TIDAL app, the other is streamable. I’m guessing that the last metadata dump that we’ve received from TIDAL and published isn’t consistent with current real world. I suspect that when we deploy the next version of our metadata tomorrow, the top album will disappear from Roon when the TIDAL library sync is done, and the other album will become streamable. Certainly I’d expect this to resolve itself if you have both albums favourited.

Sorry for the inconvenience.

Apparently we see more versions here in the US.

Yup. UK and Australia (at least) only have one or two, and don’t have the MQA version.

Just out of interest do you know how Tidal decides where you are?
I get the UK experience even though I joined before they were in the UK and so pay in US$.
I am not asking to avoid any form of rights issues, I am more than happy with the millions of albums I can go play with - I’m just nosy.

I believe that it’s at the account level (i.e. not geolocation which would make no sense for travellers). I guess at some point they must have migrated you (silently?).

I guess so. Each supplier is different. I joined Hotmail which then fed into my Live ID, before it arrived in the UK and despite working for Microsoft they could never get my account moved so I could be seen as being in the UK.

It was actually a TIDAL glitch then, because the latest metadata is not live (yet). Will be very soon.

Edit: or… your library had cached some even older metadata.