Brahms is not listed under Focus - Composers

Using FILTER Brahms does not yield anything

That’s odd - it’s working here. What, precisely, are you doing? I’m starting in the Composers browser, then using the Filter (top right of the screen). It doesn’t matter whether I show “All” composers, or just “Classical” composers, I can filter down to Brahms… 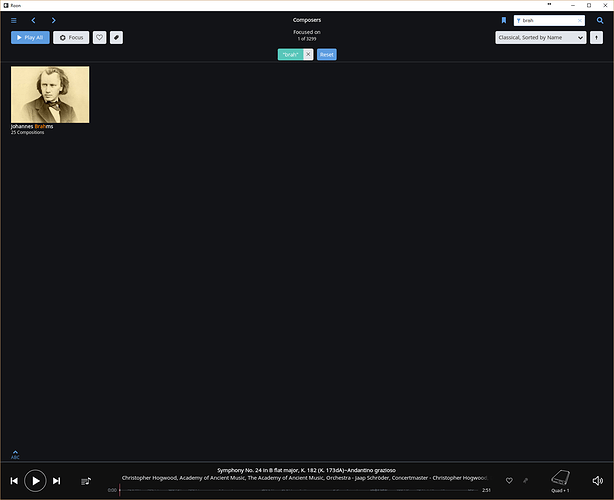 Yes, very odd. I was trying to get it using an iPad but got nowhere so sent the message from it. And you are right as no problem now I’m back to this PC.

Is there some oddity with the iPad? I noted the warning about not upgrading its software so have avoided doing that.

The appealing mysteries of computers!!!

Is there some oddity with the iPad? I noted the warning about not upgrading its software so have avoided doing that.

Ah, you’re using the Roon remote function on an iPad. I don’t have any Apple or Android products, so can’t comment - perhaps someone else can check out the Filter function in the Composer browser to see if there’s a bug here…

Indeed if he’s purposefully running old iOS software because of a misunderstanding many sorts of chaos could be happening.

Mmmm, I seem to irritate you for some reason Ludwig - shades of past encounters? I just checked and the iPad tells me the software is iOS 10.3.1 and it is up to date.

But there might be a problem with the Roon software re composers. It did not reveal all the albums I have of Mahler when I tried to search for a fle I knew was there (but had forgotten the artist).

But there might be a problem with the Roon software re composers.

I couldn’t replicate the Brahms issue on my iPad. Maybe if you could describe the exact steps you took to get to the point where Brahms didn’t show up? Or maybe you just need to reset the Focus?

Please be assured I’m not an amateur at all this and genuinely reported what I encountered. I was trying to focus on some suitable Brahms chamber works so selected Focus -> composers and looked for Brahms but it was not listed under Johannes Brahms. So I then tried focus but nothing showed. I attempted this several times after a Focus reset but when it failed posted here via the iPad, something I found a PIA by the way.

Yesterday I was searching for a Mahler Symphony I knew was there but Composer -> Mahler did not display it. And there were heaps of other Mather albums also not displayed.

OK, I’ll see if I can replicate these problems tomorrow. Night here now so I’m about to retire.

Please be assured I’m not an amateur at all this and genuinely reported what I encountered.

I wasn’t trying to imply anything like that — I was curious about the issue and was just looking for a way to replicate it if I could. I apologize if the way I posed my questions suggested anything negative about your computing skills.

On the iPad and in the library/album view, select the filter (funnel) icon 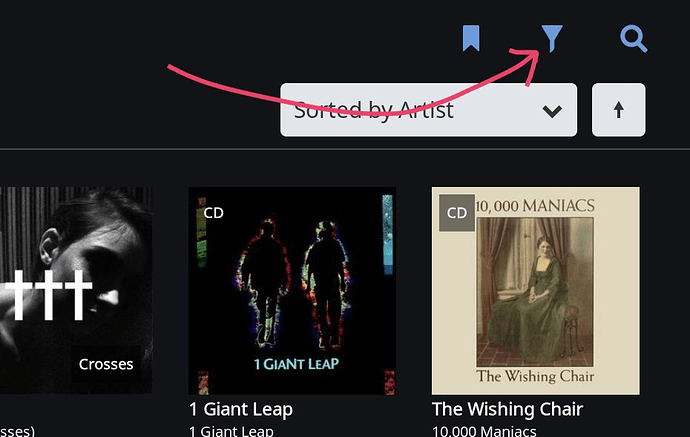 Type in the letters B R A H M S. As you do that you will see the content of the screen change as the filter is applied per letter.

If you have BRAHMS included either as part of the artist (some releases do this) or in the album title (more common) then you will see all albums in this view.

In the example here you will see 193 returns for Brahms using this method. 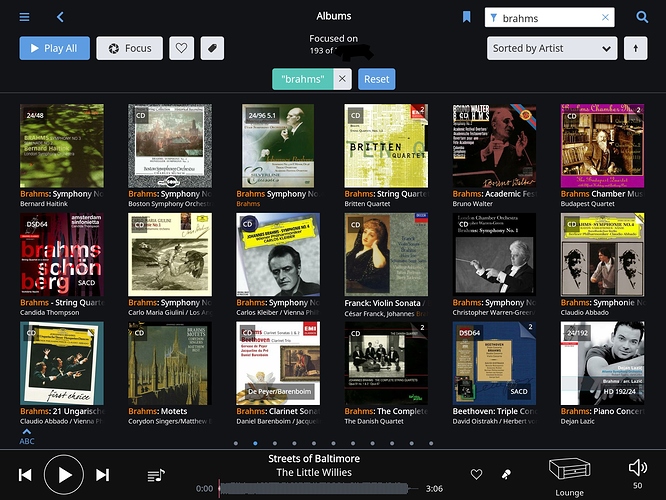 If you are not seeing this then either you have catalogued your collection so that Brahms is not shown in either album title or artist or you are doing something different.

As posted earlier there is no trouble finding BRAHMS on this PC (Roon files are on an internal 6 TB HDD).

So I just rebooted the iPad and voila, it behaves the same. I’m guessing that the reboot reset the iPad to behave so will be aware of this for the future. So the good news there appears to be no iPad software problem, just the often recurring one with PCs that problems often disappear with a reboot.

And this result was the same on both the iPad and this PC. Any suggestions why this happens? It most likely explains why I could not find an album yesterday.

Thanks for the response David. Please be aware I was not offended by what you posted and appreciated your response. At 81 I’m not the sharpest razor in the pack but am trying. Unfortunately however some appear to find me too trying for their patience but that is another story and has no relevance to you.